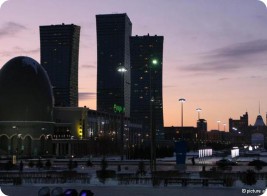 Peculiar features of the Kazakh justice: does it fight against corrupted persons or opposition activists?

An authoritative German media holding ‘Deutche Welle’ posted an article on its web site which discusses some characteristic features of Kazakh justice in matters relating to combating corruption in the country.

In the article “Kazakhstan’s Justice: Is the fight directed against corrupted persons or opposition activists”, a ‘Deutche Welle’ journalist drew attention to the fact that the political persecution in Kazakhstan is very frequently presented in the guise of fighting corruption.

Among persons who are accused by the Kazakh authorities of conducting corrupt activities are the following defendants: Anar Meshimbaeva (ex-head of the Agency for Statistics), Rakhat Aliyev (Nazarbayev’s former son-in-law), Akezhan Kazhegeldin (former Prime Minister of Kazakhstan), Victor Khrapunov (former Minister for Emergency Situations), and Mukhtar Ablyazov (banker), who are forced to abscond abroad from Kazakh justice. In particular, all of them, except for A. Meshimbaeva, received political asylum in European countries.

Speaking about the peculiar features of the fight against corruption in Kazakhstan, the ‘Deutche Welle’ journalist focused on the fact that the trials that are on-going in the country have demonstrated time and again that some defendants receive longer terms of incarceration, while others – those who do not pose a threat to the authorities – get off with a mild threatening. As an example, the trial of Ablay Myrzakhmetov, the former head of the Ministry of Transport and Communications, whom financial police incriminated with the theft of more than 16 million euros. The ex-minister was sentenced by the Supreme Court of the RK to five years’ imprisonment. Now Myrzakhmetov is a head of the National Economic Chamber ‘Atameken’. At the same time, Akezhan Kazhegeldin and Mukhtar Ablyazov are forced to skip the country.

Today the Kazakh authorities are actively working to extradite those who escaped abroad from law enforcement agencies. However, the resolution of this issue is very controversial, since the surrender of fugitives, persecuted for their political beliefs, is a very serious act in Europe.

The logical continuation of the attempts undertaken by the Kazakh authorities to incarcerate the opposition activists who left Kazakhstan can be seen in accusations, filed recently by the General Prosecutor of the RK against M. Ablyazov, Ketebaev and M. Pavlov who are allegedly involved in the organisation of planned terrorist attacks in Almaty. It seems that law enforcement authorities dared to play this particular card, taking into account how the West approaches the issues related to terrorism.

More on this topic:
Kazakhstan , corruption