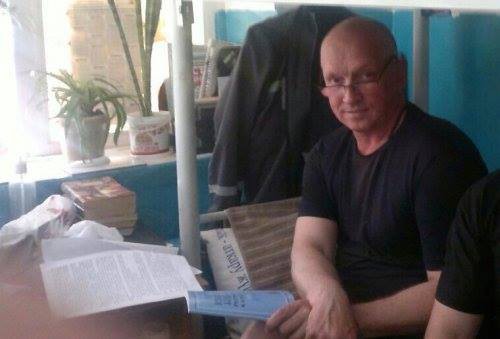 A fourth birthday in prison: Authorities create unbearable conditions of detention for Kozlov

On 10 August, 2015, the Kazakh opposition leader Vladimir Kozlov celebrated his 55th birthday behind bars. Having been placed in strict conditions of detention, he is subjected to ill-treatment and faces the risk of being transferred to a different, more severe penal colony. Vladimir Kozlov’s imprisonment has become a symbol of the lawlessness of the regime which declares its commitment to democratic principles, but, at the same time, consistently refutes the remarks of the UN and the EU on gross human rights violations.

Vladimir Kozlov challenged the unjustified penalties in court, which led to his transfer to solitary confinement and, subsequently, to strict conditions of detention. On 7 August, 2015, the appeal was dismissed. The court concluded that Kozlov had ‘threatened to apply physical harm’ when addressing the leadership of the colony with the words: “When I’m released, you will answer for this mayhem”.

The head of the colony, Abylgazy Idilov stated in court that Kozlov is a ‘violator’ who ‘writes appeals’ and helps other inmates to write theirs. Kozlov has produced more than 20 complaints against illegal actions of the prison management. Human rights activist and member of the National Preventive Mechanism Zhemis Turmagambetova, was not allowed to participate in the hearing, as, as she claims, the court unjustifiably declared the meeting closed.

According to the lawyer, Vladimir Kozlov is being kept in a barracks with an area of 50-60 square metres along with19 other people. Phone calls are prohibited, prisoners can only walk for an hour and a half a day, and they are allowed to see their family only three times a year during short visits.

Journalist Irina Petrushova noted that the purpose of provocations against Kozlov could be to force his complete isolation, or transfer to another colony.

Journalist Irina Petrushova noted that the purpose of provocations against Kozlov could be to force his complete isolation, or transfer to another colony. According to the lawyer Ayman Usmanova, on 10 August, 2015, Kozlov had a sim-card from a mobile phone planted in his cell which could give rise to another penalty. If the administration continues to accuse Kozlov of ‘violations’, the strict conditions of detention he currently endures will be extended or he may be transferred to the most severe prison in Kazakhstan, in the city of Arkalyk, where the political prisoner Aron Atabek was sent twice.

Because of the political prisoner, prison No. 155/14 in the Almaty province has been the subject of increased public attention. This may prevent the corrupt practices of Idrisov, the head of the prison. According to journalists, he embezzles money allocated for repairs and food, as well as earning money from prisoners, as he supplies the colony with drugs, alcohol, mobile phones and other contraband items. The administration demands from some of the prisoners that they create intolerable conditions of prison life for Kozlov.

Term of imprisonment for political activities

Vladimir Kozlov was sentenced for supporting the Zhanaozen oil workers during a long-term protest action which ended in the massacre of oil workers on 16 December, 2011. The politician represented the protesters’ interests in the European Parliament, the European Commission and the OSCE. Upon his return from Brussels, on 23 January, 2012, he was immediately arrested and labelled ‘the instigator of the tragedy’. On 8 October, 2012, Kozlov was sentenced to 7.5 years in prison, having been found guilty of ‘inciting social discord’, ‘calling for the overthrow of the constitutional order’ and ‘forming a criminal organisation’.

The ‘dictated’ testimonies against Kozlov were given by participants in the case, who ‘repented’ and agreed to ‘cooperate with the investigative bodies’. The court decision noted that Kozlov ‘created a positive image of Mukhtar Ablyazov’ and spread ‘untruthful’ and ‘provocative’ criticism of the authorities. The court relied on the conclusions of ‘psychological experts’, who analysed the ‘inner world of the defendant’ and described Kozlov as ‘uneducated’, ‘bohemian’, and ‘controlled by Ablyazov’. Statements of 22 oil workers, who reported the use of brutal torture against them during interrogations, were ignored by the court. This ‘forced’ evidence was used against Kozlov. The European Union and human rights organisations have recognised him as a political prisoner.

The judgment against Kozlov marked a new wave of political oppression, which resulted in bringing the opposition movement and the independent media in Kazakhstan to the verge of extinction. Civil society activists, independent human rights defenders and journalists continue to live under oppressive climate of fear.

The judgment against Kozlov marked a new wave of political oppression, which resulted in bringing the opposition movement and the independent media in Kazakhstan to the verge of extinction.

On the basis of the judgment against Kozlov, in December 2012, the opposition party ‘Alga!’ and 34 influential non-state media were banned, having been found guilty of ‘inciting social discord’. In the years 2013-2015, several dozen journalists were prosecuted on charges of ‘defamation’. On 19 June, 2015, the court ordered the journalist Gyuzal Baydalinova to pay to ‘Kazkommertsbank’ 20 million tenges (over 95 thousand euros) in compensation for ‘damaging its reputation’. In addition, Kazakhstan is striving to hamper the activities of the opposition online portal ‘Respublika’, which is administered in the United States.

New repressive criminal law, which was introduced against the advices of the international community, has become another blow to civil society. The Republic of Kazakhstan is now close to being on a par with other authoritarian states of Central Asia.

Kazakhstan publicly denies criticism of the EU and UN

The Special Rapporteur expressed his concern over the absence of an independent international investigation into the events in Zhanaozen, and also noted the political nature of the article on ‘inciting social hatred’ (Art. 174 of the Criminal Code), which, in reality, was used to sentence Kozlov for his political activity. In response, the authorities stated that the events in Zhanaozen were thoroughly investigated; Article 174 of the Criminal Code “is in line with the interests of Kazakhstan regarding the preservation of interethnic harmony and stability”, and Kozlov’s guilt “was recognised by the court on the basis of concrete evidence proving that protesters were provoked to violently oppose the authorities, on the instructions of the fugitive Kazakh banker Mukhtar Ablyazov…”.

The Open Dialog Foundation hereby calls on EU member states to suspend the ratification of the new Partnership Agreement with Kazakhstan until the demands as regards the release of Vladimir Kozlov and an international investigation into the Zhanaozen tragedy are fulfilled. We also emphasise the need to boycott the exhibition ‘EXPO-2017’, taking into consideration Kazakhstan’s disrespect for the obligations in the field of human rights before the EU, UN and OSCE. We hereby call on the EU diplomatic missions in Kazakhstan, members of the European Parliament, the OSCE and PACE to join in congratulating Vladimir Kozlov, who did not bend under the pressure of the oppressive system, and to meet him personally in prison. It is necessary to apply all possible means of pressure on Kazakhstan, with a demand that the political prisoner be released and reunited with his family.