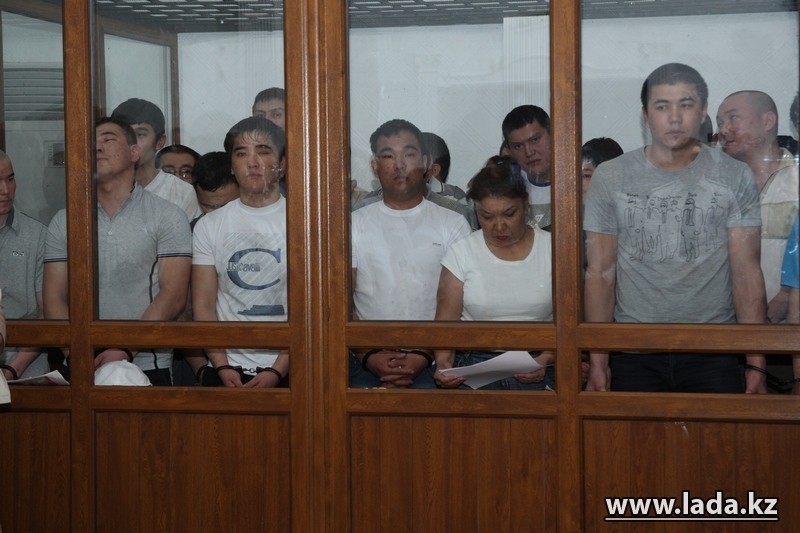 The Aktau trial: witness statements on torture and the public reaction to the situation surrounding the judicial process

The Open Dialog Foundation continues to monitor the situation in Aktau, where hearings regarding the riots in Zhanaozen on the 16th and 17th of December, 2011 have been held. The Court began its examination of witnesses, who, like the defendant oil workers, claim that they had given evidence under pressure and had been subjected to threats. The community in Kazakhstan has already expressed its opinion on the situation.

At the Aktau trial, witnesses, one after another, renounced their testimonies given during the investigation, and stated that they had been subjected to physical as well as psychological abuse.

23.04.2012. Yerlan Nurzhanov, an employee of the ‘Semser’ security company, renounced his testimony and said: ‘I slandered my colleague Mels Sarybaev after I was beaten and threatened … They started to beat me, first – in the car, then – in the prosecutor’s office. They threatened to use an electric taser on me or lock me up in the temporary detention facility … But if I agreed to give false evidence, I was promised that Article 100 of the Criminal Procedure Code (protection of witnesses) would be applied in my case, and my name would not be revealed’.

23.04.2012. Berden Kozhamberdiev also renounced his testimony and told the judge what he had to go through in the Main Department of Internal Affairs: ‘I renounce my testimony given during the investigation… In the MDIA of Zhanaozen masked men asked me, ‘What happened on the 16th of December?’ I replied, ‘I know nothing’. They started to beat me. Then they asked me if I knew Yertay Ermukhanov. They said that we both were robbing ATMs. I denied it. They started to beat me harder. They put plastic bags on my head… I was frightened, I did not know where to go or to whom I should complain about it. I signed the protocol of interrogation, slandering Yertay’.

23.04.2012. When evidence was being taken from Berdibek Batyrov, an oilman, a pen was put between his fingers and his fingers were twisted: ‘They used a pen to twist my fingers so hard that they almost broke them, afterwards they beat me… They questioned me, one after another. And they also beat me one after another. I was confused and did not know anymore to whom I should speak and what I should say. When signing the witness statements, I did not know what was going on anymore. Investigators threatened me, saying that if I did not say what they wanted, they were going to ‘do something to my wife, and my children would be in trouble, too».

23.04.2012. A witness Bauyrzhan Tolkulov said that in the prosecutor’s office violence was used against him, but he does not consider it battery: ‘I do not know what other people experienced, but I was struck in the abdomen just once, they probably wanted to frighten me. But I do not consider it a case of battery’.

24.04.2012. An anonymous witness who goes under the pseudonym ‘Alpysbayev Kairat’ retracted his testimony and admitted that he was forced to slander the oil workers. The real name of the witness is Alexander Bozhenko (a pupil of the children’s home, an orphan who has been recently adopted). Alexander Bozhenko testified against Zhanat Murynbaev, with whom he is acquainted. Addressing Zhanat Murynbaev, Alexander Bozhenko said: ‘Zhannat, my brother, please forgive me. I swear I wanted to tell the whole story truthfully. But I was forced to give false evidence. On the 18th of December I was caught, taken to the police station, then beaten and tortured. I know you, I know your family, I suffered for two months, I wanted to hang myself. I will do everything I can so that you do not go to prison!’.

25.04.2012. A witness, Doskali Atyrau, who testified against Samat Koyshibaev, said that during the interrogation, an employee of the prosecutor’s office threatened him with prosecution, if it did not provide the evidence that the prosecutor needed.

25.04.2012. In the courtroom, on the initiative of lawyers, a witness Yerlan Zhailykhanov was examined. It turned out that this witness has already testified in court on the 24th of April, 2012 under the pseudonym ‘Almaz Orazbayev’. He stated that he renounces the previously given testimony and told the judge what he had to go through in the police department during the investigation: ‘I was taken to the police station on the 27th of December. They threatened me and beat me there… I was released at 3 a.m. I shivered in the night from fear and cold, I could not regain my senses. I asked the investigators: “Where will I go now? You know it is curfew time’. While I was going home, I was captured by the soldiers And they locked me up, then I was beaten by people wearing masks. In the morning I was released. A day later I was taken from my house again and forced to sign some papers. Then they would take me from my house from time to time, threaten me and tell me that if I did not sign or do something that they wanted me to do, they would put me in prison. I was afraid to leave home … In the prosecutor’s office they showed me photos and gave me names. They said: ‘Show them’. And I have known Yertay Ermukhanov for a long time, he is a good guy. The others I barely know, maybe I have seen them a couple of times; I recognised them in the photos laid out’.

26.04.2012. Evgeniy Bozhenko was questioned again; he had already testified on the 24th of April, 2012 under the pseudonym ‘Alpysbayev Kairat’ against Zhanat Murynbaev. At the trial, he described the circumstances under which his interrogation was carried out in the police department: ‘”On the 18th of December, I left my house and went to the shop to buy bread and soda. Near the entrance to my house I was attacked by riot policemen. They knocked me to my knees and began to beat me. They were speaking in a Chimkent dialect. Then they pushed me into the van. Inside, they continued to beat me with batons. They brought me to the police department, where they made me take off my shoes. I made to stand in a garage on the cold floor without my shoes on until the evening. I was beaten and they forced me to slander Zhanat. They broke my wrist. There is an X-ray which confirms this. My head still hurts. I don’t know the names of those who beat me. Aside from me, I remember that Anatoly Sergeyevich Sekeev was also in the garage. I know him and can identify him by appearance. I was taken to the prosecutor’s office. There were workers of the prosecutor’s office in Astana there. In the prosecutor’s office they beat me in the kidneys. I told the guard about this, but he said that he is not responsible for the worker who beat me. Zhanat, please forgive me. My testimony was written by the investigator. On the 20th, I was released from the detention facility after I signed this testimony. Later, I was ordered to come again. I saw people lying on the floor in the detention facility. They said that it was Nazarbaev’s order to beat us!”.

3.05.2012. At the next court hearing on the Zhanaozen case, prosecutors issued a statement with a request not to institute criminal proceedings against workers of law enforcement bodies: ‘The incidents of torture, which are described in the defendants’ statements to the prosecutor’s office, requiring legal assessment of the acts carried out by law enforcement officers, were unconfirmed. The defendants were denied the initiation of a criminal case against the workers’.

Opinion leaders of Kazakhstan (intellectuals, NGOs, media), as well as the international community, are shocked by the testimony given by defendants-oil workers and witnesses who stated that they had been subjected to cruel physical abuse and torture during the investigative activities connected with the case on the Zhanaozen riots.

Let us remind ourselves that due to restrictions put on the media regarding video and audio-recording as well as photography during the trials means that the judicial processes are constantly monitored by just a few publications: the ‘Respublika’ newspaper, the ‘Vzglyad’, the ‘Azattyk’ radio, a ‘KazTAG’ news agency and the ‘Stan.kz’ online portal.

16.04.2012. Social activists and journalists in Kazakhstan (Galym Ageleuov, Gulzhan Yergaliyeva, Bolat Atabaev) issued a statement at a press conference, demanding the trial of the case of oil workers be stopped, since the investigations carried out against those accused in the Zhanaozen case were conducted illegally.

23.04.2012. Representatives of the Independent Social Commission are to Investigate the Tragic Events in Zhanaozen (the commission includes: a writer Sofy Smataev, an opposition politician Mukhtar Tayzhan, a journalist Yermurat Bapi, a poet Temirbek Medetbekov, a member of the Presidium of the All-National Social-Democratic Party ‘Azat’ Marzhan Aspandiyarova) held a press conference, during which they relayed details about the present events at the trial in Aktau. The Commission addressed a statement to President Nursultan Nazarbaev with a demand to put an end to litigation in the Zhanaozen and Shetpe cases. The Commission was forced to resort to this move due to numerous statements of the defendants-oil workers saying that during the investigation they gave testimony under intense mental and physical pressure. ‘The whole course of proceedings clearly shows that the case is, generally, falling apart. Facts relating to the atrocious torture of the accused are now being publicised! According to the defendants, the testimonies that formed the basis of the charges were given by witnesses who were being subjected to torture! Today, a biased conduct of the trial puts into question the impending sentences of the court, “- the statement declares. The Commission demands that the President immediately takes the following steps:

23.04.2012. International non-governmental organisation ‘Human Rights Watch’ made ​a statement in which it called on the Kazakh authorities to reconsider the charge against the 37 oil workers in the organisation of mass riots on the 16th-17th of December, 2011 in Zhanaozen, and to conduct an independent investigation regarding the use of physical and mental abuse on the defendants-oil workers during the course of the investigation.

24.04.2012. The opposition leader Mukhtar Ablyazov appealed to the citizens of Kazakhstan with a statement, in which he criticised the actions of state bodies during the judicial process in Aktau. He condemned the use of physical violence against the defendants-oil workers during the investigation of the Zhanaozen disorders. ‘I now address the police officers, the KNB workers, the prosecutors involved in the killings. The crimes that you commit do not have a period of limitation. You will be held responsible for your actions. Today, you only have this one chance to make your future less painful – you have to give names of those who gave orders, those who authorised the acts of torture carried out during interrogations, those who promise you immunity’ – Mukhtar Ablyazov stated.

25.04.2012. In the European Parliament (Brussels), meetings of the Sub-Commission on the Promotion and Protection of Human Rights were held. During the sessions, the political situation in Kazakhstan was discussed. As a part of the monitoring of the situation after the adoption of the resolution on Kazakhstan in March 2012, the President of the European Commission and members of the European Parliament addressed the issues of the attempted murder of the journalist Lukpan Akhmedyarov, oppression of editorial staff of the ‘Golos Respubliki’ and the ‘Vzglyad’ newspapers as well as of the social activists in connection with a new case on ‘terrorism’. “The trial in Aktau is another issue. The EU representatives expressed deep concern about the use of physical violence during the interrogation of witnesses and the defendants-oil workers, who are accused of organising mass-riots in Zhanaozen on the 16th-17th of December, 2011. They stressed that further cooperation with Kazakhstan will depend primarily on a fair investigation into these cases of oppression of opposition representatives and on the tragedy in Zhanaozen.