Search
The Open Dialogue FoundationPublicationsReport: Analysis of documents in the case of Ablyazov

Representatives of Kazakhstan prepared documents for the Ukrainian and Russian investigation in the case of opposition politician Mukhtar Ablyazov. Kazakhstani officials themselves questioned the defendants in the case, threatened them and forced them to sign testimonies. In Kazakhstan, the Federal Security Service of the Russian Federation questioned the Kazakh activists about their contacts with several Russian oppositionists, whom the authorities consider to be “Ablyazov’s people”.

The coordination of the investigation on the case of Ablyazov was carried out at the level of presidential administrations and involved senior officials of Russia and Ukraine. At the same time, Russia even had “control over the judicial process”.

Kazakhstan illegally influenced employees of ministries and law enforcement agencies of France and other European countries. Lobbyists received huge fees for the creation of a negative image of Ablyazov, ensuring his extradition and concealing the political motivation underlying the case.

The Russian investigation states that the proceeds from legalisation of property, “acquired with the money stolen by M.K. Ablyazov”, were used to “change the constitutional order” and “destabilise the political situation” in Kazakhstan. Thus, the official documents of the investigation refute international guarantees of Kazakhstan that the financial crimes Ablyazov is accused of are not related to his political activities.

Kazakhstan illegally influenced employees of ministries and law enforcement agencies of France and other European countries. Lobbyists received huge fees for the creation of a negative image of Ablyazov, ensuring his extradition and concealing the political motivation underlying the case.

These facts became known from items of correspondence, which, in the years 2014-2015, were widely publicised in Europe. The authenticity of the correspondence has been confirmed by official information and testimonies given in US courts by representatives of the Kazakh government who tried to block the dissemination of these documents. Citing the documents of the correspondence, on 9 April, 2014, the High Court in London refused to render to Ukraine Ablyazov’s associate, Igor Kononko.

Countries such as Spain, Italy, Great Britain, Poland, the Czech Republic, Austria, Switzerland, Belgium, the United States and Lithuania have granted asylum to Ablyazov’s associates and relatives. Their extraditions to Ukraine, Russia or Kazakhstan were denied.

Over the past two years, human rights organisations, approx. 50 members of the European Parliament and the PACE have pointed to the political context of the case of Ablyazov and the inadmissibility of his extradition. Extradition of the opposition politician to Russia or Ukraine would pose a risk to his security and would be tantamount to his further rendering into the hands of the Kazakh authorities.

This report presents an analysis of the items of correspondence posted on information portals Trust.ua, ‘Respublika’, ‘Obozrevatel’, The Moscow Post, the newspaper Le Temps and on the Facebook page of the Kazakh political refugee Muratbek Ketebayev. These documents were also mentioned by Mediapart, the Financial Times, Le Nouvel Observateur, RFI and other European media.

THE CASE OF MUKHTAR ABLYAZOV: A BRIEF SYNOPSIS

In 2001, the former energy minister Mukhtar Ablyazov became one of the founders of the influential opposition movement ‘Democratic Choice of Kazakhstan’; due to this fact, he fell from grace with President Nazarbayev. In 2002-2003, Ablyazov served time in a Kazakh prison, having been convicted of ‘abuse of power’. In prison, he was subjected to torture, after which he could not move. Under pressure from the international community, which recognised the judgment as politically motivated, Ablyazov was pardoned. However, the ‘Democratic Choice of Kazakhstan’, and its successor – the ‘Alga!’ party were banned in Kazakhstan, having been labelled ‘extremist’.

In 2005, Ablyazov became the head of the Kazakh BTA Bank. He continued to support and finance the opposition, which led to further conflict with Nazarbayev. According to Ablyazov, he refused to comply with the demands to transfer the controlling stake in BTA Bank to the representatives of the president.

After that, in 2009, the BTA Bank was nationalised, and Ablyazov and his associates were presented with charges regarding financial crimes. Ablyazov left the territory of Kazakhstan. Later, Kazakhstan also accused Ablyazov of ‘inciting social hatred’, ‘preparing an act of terrorism’ and ‘a crime against the peace and security of mankind’.

In 2011, Ablyazov was granted political asylum in Great Britain. British police warned him of the threat of his assassination or kidnap for political reasons, and stated that they could not provide him with daily protection.

Meanwhile, the Kazakh BTA Bank has initiated civil actions in the London court. The Kazakh authorities have argued that Ablyazov, by providing loans to affiliated companies, misappropriated approx. 4.5 billion dollars. On 16 February, 2012, Judge Nigel Teare found Ablyazov guilty of ‘contempt of court’, and, as a result, Ablyazov was sentenced to 22 months’ incarceration. Ablyazov was absent from court during the adjudication. On 29 February, 2012, on the motion of the BTA Bank, Judge Teare issued a conditional order by which he ordered Ablyazov to surrender to custody and to disclose the state of his assets. Failure to meet these two requirements, according to the conditional order, would result in Ablyazov being deprived of the right to a defence in civil lawsuits.

The oppositionist insisted that the disclosure of assets would result in his associates being prosecuted by President Nazarbayev. Ablyazov also feared he would be killed in prison on the order of President Nazarbayev. With the tragic example of Aleksander Litvinenko in mind, Ablyazov left the territory of the United Kingdom. The recent murder of an opponent of Nazarbayev, Rakhat Aliev in an Austrian prison, confirmed that Ablyazov’sfears were not without grounds.

After Ablyazov left Great Britain, BTA Bank was able to apply for the issuance of judicial decisions in respect of Ablyazov without conducting proceedings and examining evidence. In November 2012, a British court ordered Ablyazov to pay $2.1 billion to BTA Bank. This was a judgment in absentia – when a decision is automatically issued without trial since the defendant is deprived of the right to a defence. Another decision in a civil case, ordering Ablyazov to pay $400 million, was also issued without a trial, and, accordingly, without taking into account the arguments of the defence.

Since his detention on 31 July, 2013, under the “red notice” of Interpol, Ablyazov has been held in custody in France. Ukraine, which was then governed by Yanukovych, and Russia, sent extradition requests. Within the framework of cooperation with Kazakhstan, these countries also accused Ablyazov of financial crimes. Kazakhstan has no extradition treaty with France, and that’s why it makes attempts to get Ablyazov through Ukraine and Russia.

On 4 March, 2015, a French court finally approved the extradition to Ukraine and Russia, giving priority to the Russian request. The court only verified the “compliance of the extradition requests with procedural rules”. Now, the decision on extradition is to be issued by the French government.

Investigators and judges who were running or continue to run the case of Ablyazov in Russia:

4. Kazakhstan’s undue influence on the authorities of France and other european countries

OCO recommended using search engine optimisation, so that if someone ran a search for “Ablyazov”, the search results would be not about “persecution of the political dissident” but about “the swindler who stole 10 billion dollars from the bank and is abusing the protection afforded to him in Western Europe”.

6. Kazakhstan’s attempts to block the publication of declassified documents

The extent of Kazakhstan’s corrupt influence and the scale of the negative PR campaign are yet further proof of the fact that the case against Mukhtar Ablyazov and his associates is politically motivated. 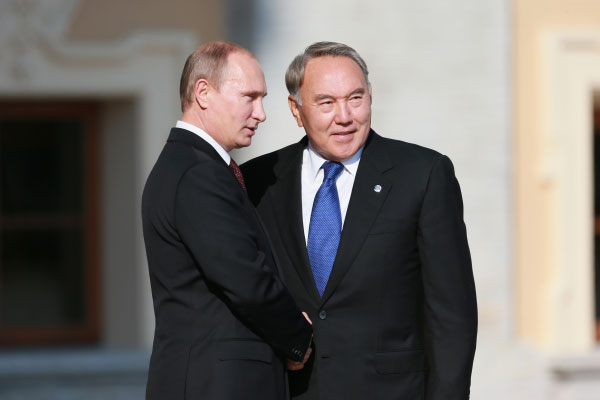 The regimes of Putin and Nazarbayev are using Ablyazov’s criminal case as a tool for political revenge and reprisals against both Kazakh and Russian opposition. The investigators claim that Mukhtar Ablyazov spent the “stolen money” on financing a part of the Russian opposition in Kazakhstan.

Ukrainian and Russian investigative bodies involved in Ablyazov’s case are not independent; they depend on the political interests of the Kazakh party. Therefore, his extradition to these countries may result in an unfair investigation and unfair trial, biased interrogations beneficial to Kazakhstan and, eventually, extradition to Kazakhstan.

The regimes of Putin and Nazarbayev are using Ablyazov’s criminal case as a tool for political revenge and reprisals against both Kazakh and Russian opposition. The investigators claim that Mukhtar Ablyazov spent the “stolen money” on financing a part of the Russian opposition and preparing an “overthrow of power” in Kazakhstan.

Any charges relating to economic crimes brought against Mukhtar Ablyazov must not be considered outside the context of his political persecution, prompted by his opposition activity.

The European Union labelled the Russian show trials of Ukrainian political prisoners a “farce”. These events showed that Moscow is not going to defer to the position of civilized states, respect international law and fulfill its obligations. Russia is the closest political and economic ally of Kazakhstan. France, which joined the Magnitsky list sanctions, cannot ignore the fact that investigators and judges from this list are running a case against Ablyazov.

Ukraine continues to participate in Ablyazov’s case, reluctant to mar its bilateral relations with Kazakhstan. After the facts of abuse in Ablyazov’s case had received widespred coverage, criminal proceedings against two Ukrainian investigators were initiated. However, the Ukrainian prosecution office does not seem to be interested in a prompt and impartial investigation into Ukraine’s unlawful cooperation with Kazakhstan. The corrupt judicial system of Ukraine strongly resists all attempts to reform it.

Russia and Ukraine do not ensure proper conditions of detention, nor do they provide protection against torture. The European Convention on Extradition and the UN Convention against Torture forbid the extradition of a person if charges against them have a political context or if there is a threat of torture. The Open Dialog Foundation hopes that the French government will take into account the position of its European partners and human rights organisations regarding the inadmissibility of extradition of the Kazakh opposition activist.

Anyone willing to support our demands can address a request to: