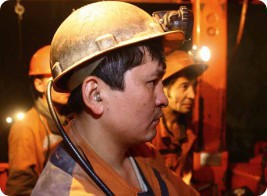 Kazakhstan: Workers’ strike at the ‘Annenskaya’ mine

6 May 2012 | Editorial office
On Saturday, May 5, 2012, the information was spread that workers of the ‘Annenskaya’ mine (part of the ‘Kazakhmys’ Corporation) went on strike, demanding that the company’s management improve working conditions and substantially increase wages.

This situation development was the result of the conflict between management and employees of the company “Kazakhmys” which began a long time ago. In February this year, it became known that at the end of 2011, 502 workers of the Zhezkazgan copper plant of the ‘Kazakhmys’ corporation signed a letter to the employer. In the document, they demanded that wages be increased in connection with deteriorating social situation in the Karaganda region. According to the miners, real wages in the enterprise amounts to 60-80 thousand tenge per month (€ 300-400). The result was that the miners Aset Erubaev and Yevgeniy Zavadskiy (one of the initiators of the written request to the company management) will soon be laid off. “It all has started long ago, not yesterday, not two days ago. In general, our bosses persecute us because of our activity, because of our civil position. We do not agree with many things that happen within the corporation, we express our dissatisfaction among the workers. We wrote the letter regarding the wages. We addressed Ogai with this request”- said Aset Erubaev.

On the 4th of May, 2012 the head of the ‘Kazakhmys’ corporation Eduard Ogai spoke at a press conference, during which he admitted that problems do exist in the enterprise, but they are resolved through negotiation. It was also stated that in the near future Zhezkazgan is going to be visited by the country’s president, Nursultan Nazarbayev.

On the 5th of May, 2012, the entire night shift of the ‘Annenskaya’ mine (approx. 100 people) refused to go to the ground, and workers of the day shift could not go to the mine – drivers of service buses refused to drive them. The territory of the ‘Annenskaya’ mine was cordoned off by security workers of the corporation, as well as by the riot police. No one was allowed into the mine. Striking miners demanded a salary increase of at least 150 thousand tenge (€ 780), and for those who are directly engaged in the excavation – an increase of the salary up to 350-500 thousand tenge (€ 1830-2600).

On the 6th of May, 2012, the striking workers at the ‘Annenskaya’ mine were joined by employees of a few other mines, namely: Mine № 65, № 67, ‘East- Zhezkazgan’ mine and ‘Southern’ mine.  The total number of protesting miners exceeded one thousand persons.

On the 7th of May, 2012, the strike at the ‘Annenskaya’ mine ended. As a result of negotiations held with the striking miners, the leadership of the ‘Kazakhmys’ corporation expressed its readiness to meet the key requirements of the miners, set out in the previously received collective letter. ‘Problems are solved, salaries will rise substantially,’ – said the chairman of the ‘Kazakhmys’ Eduard Ogai. According to him, as a result of salary increase, the face labour group, provided that the plan is fulfilled, will receive up to 400 thousand tenge (€ 2,100) and more.

It should also be noted that on the 4th of May, 2012, the Zhezkazgan City Court decided, that the worker Yevgeniy Zavadskiy, illegally dismissed from the Zhezkazgan copper plant (ZHMZ) of the ‘Kazakhmys’ JSC, must have his position restored, and the employer must pay him the average monthly salary for three months. Aset Erubaev also expressed a desire to challenge his dismissal in court.

Today, the ‘Kazakhmys PLS’ company is one of the leading international companies in the field of extraction and processing of natural resources. Conducting its activity in Kazakhstan, the company is listed on the London and Hong Kong stock exchanges, and it is included in the list of FTSE 100 (100 companies with the largest capitalisation, included in the list of the London Stock Exchange). The core business is the production of copper. The ‘Kazakhmys’ division for copper production generates large amounts of other metals in the form of by-products, including zinc, silver and gold. In 2010, the Company’s revenues increased by 35% and reached the level of $3,237 million. As of the 31st of December, 2010, the market value of the ‘Kazakhmys’ amounted to $13.4 billion. The company has several large shareholders. Vladimir Kim (of Korean nationality) owns the largest stake in the company, he is the chairman of the board of directors in the company. It is expected that in the near future he will leave his post. Also, the board of directors of the ‘Kazakhmys’ corporation includes Bolat Nazarbayev (the Kazakh president’s brother), Oleg Novachuk, Eduard Ogai, Lord Renwick of Clifton, Philip Aiken, Simon Heale, Daylet Yergozhin, Clinton Dines and Charles Watson.

More on this topic:
Annenskaya' mine , strike