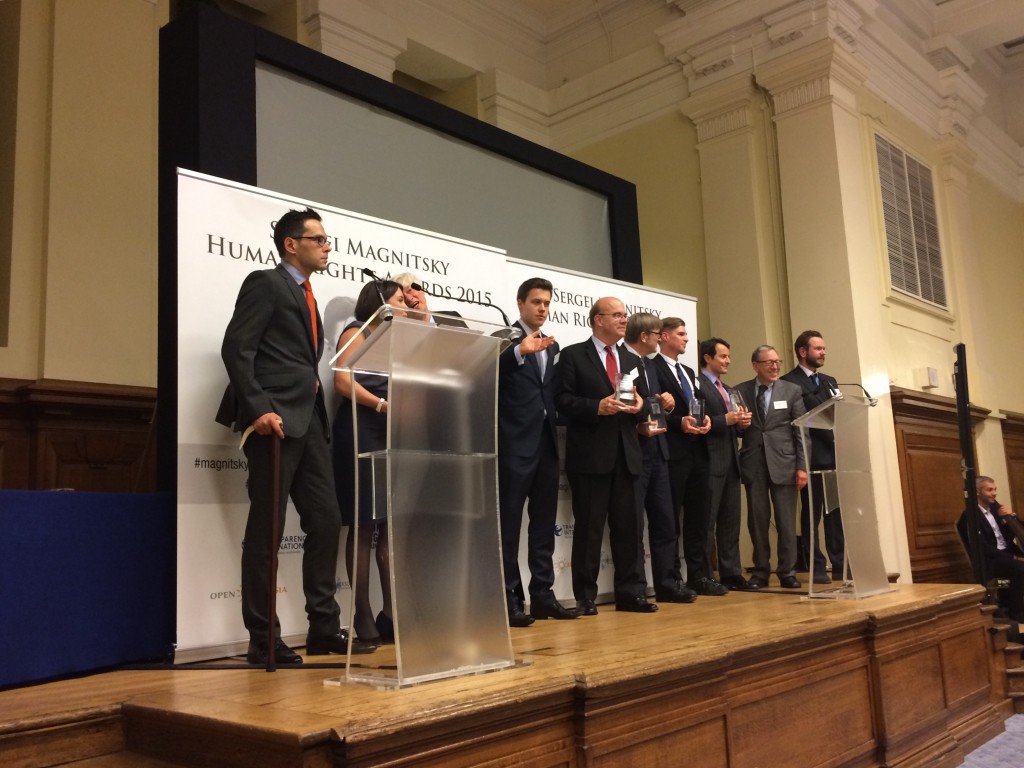 6 years ago, Sergei Magnitsky was dying tortured and beaten to death in a Russian prison. He had been arrested after having uncovered a large-scale corruption scandal, involving high-level Russian officials. His case could have gone unnoticed or, as so many, simply ended up being a yet another sad example of the repressive Russian regime, without any consequences being drawn from it.

Hosted by Bill Browder, Sergei Magnitsky’s then boss, the event was a great occasion to remember the brave Russian lawyer and to award those who have committed their careers to fighting for Sergei’s justice, making sure his name doesn’t get forgotten and for greater respect for human rights internationally. Nine awards were presented in London on the occasion of the first Magnitsky Awards ceremony. The winners – journalists, politicians, NGOs, activists and lawyers included: Andrew Rettman, a journalist from the EU Observer; Geoffrey Robertson QC, human rights lawyer; Guy Verhofstadt, the leader of the ALDE group in the European Parliament; congressman Jim McGovern; James O’Brien, British LBC Radio journalist; Irwin Cotler, a former Canadian attorney general; OCCRP, an organised crime and corruption reporting project for their investigative journalism; Thor Halvorssen, CEO and President of the Human Rights Foundation and founder of the Oslo Freedom Forum; posthumously, Boris Nemtsov, a representative of Russian opposition, tragically killed in March 2015. Since the death of Sergei Magnitsky, Bill Browder has been campaigning internationally to ensure that justice is brought to him and his family and that those responsible for his torture and death are held responsible. A campaign that the Open Dialog Foundation has been actively supporting in its most recent phase, as the US debate the need to broaden the scope of the current Magnitsky Act, to sanction all those involved in blunt violations of human rights around the world, making it a Global Magnitsky Human Rights Accountability Act.

You can follow the touching and very personal opening remarks by Bill Browder:

The Open Dialog Foundation is honoured to have been invited to participate in the awards ceremony, alongside the most prominent human rights defenders, journalists, activists, lawyers, politicians and dissidents from both sides of the Atlantic, as well as – last but not least – the family members of SergeiMagnitsky. We warmly congratulate this year’s winners of the Sergei Magnitsky Human Rights Awards, hoping that this year’s unique event will be a start of a great annual tradition.

You can see the Open Dialog Foundation’s statement of support for the Global Magnitsky Human Rights Accountability Act, here.