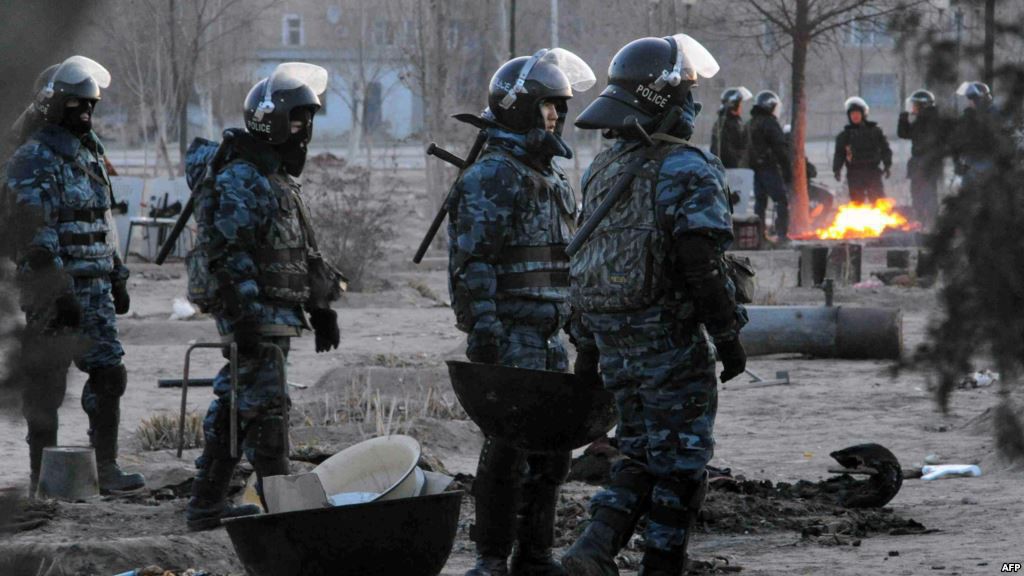 The anniversary of the shooting: ‘The Zhanaozen list’ should end the impunity of perpetrators, guilty of torture and oppression

Four years ago, on 16 December, 2011, in the Kazakh city of Zhanaozen, riot police opened fire with live ammunition on the backs of unarmed oil workers, who had been protesting for higher wages and better working conditions for seven months. On 17 December, 2011, in the village of Shetpe, police shot protesters, who demanded that shooting in Zhanaozen cease. According to official figures, at least 17 people were killed, but unofficial sources claim there were as many as 70 casualties.

As a penalty for ‘organising and participating in mass disorder’, 13 oil workers were sentenced to prison terms ranging from 3 to 7 years, whilst a further 16 people were given suspended sentences. Four residents of the Shetpe village were sentenced to 4-7 years in prison. Employees of the Open Dialog Foundation were among the international observers present at the court trials. 22 oil workers testified in court that they had been subjected to torture: they had been beaten, choked, their ears had been punctured with a stapler, they were hung by their hair and threatened with rape and acts of retribution against their family members. The victims pointed out the individual police officers who had exerted torture on them, but the prosecutor’s office ‘found no confirmation’ of these incidents having occurred. Kazakh courts sentenced the oil workers on the basis of the information obtained under torture.

Currently, the oil workers are afraid that they could be dismissed from their jobs should they participate in the events commemorating the Zhanaozen tragedy due to take place on the day of its anniversary.

At the end of 2014, Roza Tuletayeva, one of the leaders of the strike, was released, and in 2015, the remaining imprisoned oil workers regained their freedom. This became possible due to persistent efforts of the EU, UN, OSCE, human rights organisations and representatives of the Kazakh opposition who are in political exile. One of the conditions for the parole of oil workers was their “repentance for the offences committed”, and for this reason, they have been living in fear and have avoided contact with journalists ever since their release. Currently, the oil workers are afraid that they could be dismissed from their jobs should they participate in the events commemorating the Zhanaozen tragedy due to take place on the day of its anniversary.

Kazakhstan has ignored demands from the EU and the UN to release the last prisoner, convicted in the ‘Zhanaozen case’: an opposition politician Vladimir Kozlov. He is serving a 7.5-year sentence for ‘inciting social discord’, ‘calls for the overthrow of the constitutional order’ and ‘the establishment of a criminal organisation.’ On 8 December, 2015, Kozlov was refused early release.

According to the official position of Kazakhstan, Kozlov ‘provoked demonstrators to violently confront the authorities’ ‘on the instruction’ of the opposition politician Mukhtar Ablyazov. As Mr. Ablyazov supported the striking oil workers, Kazakhstan accused him of ‘inciting social discord’ and ‘committing a crime against the peace and security of mankind’. The same charges served as a basis for the prosecution of another political refugee Muratbek Ketebayev who actively reported on the Zhanaozen events. More than 10 EU countries have provided refuge to Ablyazov’s associates; however, Kazakhstan continues to seek their extradition, also in collaboration with law enforcement bodies of Russia and Ukraine.

Kazakhstan has consistently stated that “an objective assessment and investigation into the situation in Zhanaozen was carried out“. It is only thanks to the perseverance of the EU and the UN, who have repeatedly demanded an independent investigation, that Kazakhstan hasn’t succeeded in hushing up the Zhanaozen tragedy.

5 police officers who had participated in the dispersal of the strike, were convicted of abuse of office, and not of murder. The Appellate Court quashed the confiscation of property of the police officers, and they were released from prison early, long before the convicted oil workers. It remains unclear who gave the order to use lethal force. As announced in June 2015 by the UN special rapporteur Maina Kiai, “none of the senior officials who had supervised the actions of the police, were charged”. The police officers who suppressed the strike, continue to work in law enforcement bodies.

The police officers who suppressed the strike, continue to work in law enforcement bodies. No one was punished for the brutal torture of the people of Zhanaozen.

No one was punished for the brutal torture of the people of Zhanaozen. The prosecutor’s office refused to open a criminal investigation with regard to the incidents of torture. General Prosecutor Askhat Daulbayev continues to hold office and enjoys the full confidence of the country’s president.

Therefore, the Open Dialog Foundation hereby calls on the international community to promote the drafting and adoption of the ‘Zhanaozen list’ (analogous to the ‘Magnitsky list’), which would be an important step towards the restoration of justice and a demonstration of respect for the victims of the tragedy. Personal sanctions should be imposed against officials, prosecutors, judges, police officers and politicians who are responsible for the massacre of the Zhanaozen strikers, the torture and illegal conviction of the oil workers, as well as the oppression of activists, journalists and opposition members who supported the strikers. This list could also include European politicians who, having been paid by autocrat Nazarbayev, made attempts to ‘whitewash’ the image of the Kazakh authorities after the Zhanaozen massacre.

Bearing in mind that Kazakhstan destroys evidence of the crime and is striving to force the victims to remain silent, the published correspondence of Kazakh senior officials – ‘KazakhLeaks’ (kazaword.wordpress.com), which discloses information on the decisions regarding the suppression of the Zhanaozen strike and confirms the scope of application of corruption tools for the persecution of the opposition and civil society, could serve as a possible basis for the development of the ‘Zhanaozen list’.

In addition, we suggest that anyone, on condition of anonymity, would be able to provide facts and documents proving the complicity of specific persons in the violent suppression of the strike, as well as torture and reprisals against the victims in the ‘Zhanaozen case’.

We hereby call on the EU as one of the main investors in Kazakhstan to support the drafting and adoption of the ‘Zhanaozen list’. The EU should take a principled stance: the signing of an enhanced Partnership and Cooperation Agreement with Kazakhstan should be conditional on the implementation by Kazakhstan of EU recommendations regarding the release of political prisoners, ensuring an objective international investigation into the Zhanaozen tragedy as well as the protection of the freedoms of speech and assembly.

Nursultan Nazarbayev, the president of Kazakhstan, 23 October 2012: “A fully open, public and transparent investigation was carried out. All media outlets, all those who wanted to participate, were present at a fair trial. All those responsible weren’t convicted of any other offences, but for specific crimes. Also, representatives of law enforcement bodies who had exceeded their powers, and fired live ammunition, have been convicted. Those who incited the conflict, also received their punishments“.

European Parliament, Resolution of 13 March, 2014: «points out that the human rights situation … has deteriorated further since the brutal police repression of peaceful demonstrators and oil workers, their families and supporters in Zhanaozen on 16 December 2011… calls on the HRC to implement without delay the call made by the High Commissioner for Human Rights, Navi Pillay, for an independent international investigation into the killing of oil workers in Kazakhstan; calls on Kazakhstan, as a member of the HRC, to guarantee human rights, repeal Article 164 of its penal code on ‘inciting social discord’, end the repression of, and lift the administrative obstacles placed in the way of independent media, release political prisoners…».