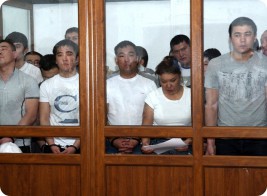 Kazakhstan: end of trial on the case of riots in Zhanaozen

On Monday, the 4th of June, 2012, during the trial concerning the riots in Zhanaozen on the 15th and 16th of December 2011, 36 sentences, of 36 out of 37 defendants, were read. By decision of the Court, 13 defendants received prison terms ranging from 3 to 7 years’ imprisonment. The rest of the defendants – oil workers, were granted amnesty, were acquitted or received deferred sentences. Judge Aralbai Nagashibaev could not announce the decision to Murat Kosbarmakov. People, dissatisfied with the decision of the court, threw shoes and plastic bottles at him. Only later the information was spread that M. Kosbarmakov was sentenced to three years in prison. Below is the full list of defendants and the sentences issued against them.

It is important to note that this decision of the court is somewhat ambiguous. First, the most severe punishment was given to those defendants who have publicly commented on what was happening during the strike of oil workers. For example, Rosa Tuletaeva was one of the main activists and advocates of the striking oil workers, Talgat Saktaganov traveled at the invitation of our Foundation to a meeting of the European Parliament and the OSCE, Tanatar Kaliyev was among the first in the trial who publicly made a statement on the torture of the defendants during the investigation. Secondly, the recognition of oil workers as guilty of inciting riots in Zhanaozen in December 2011 contradicts the sentence in the case of police officers who shot against protesters: when reading out the verdict, the judge noted that she agreed with the position of the prosecutors and the court found that the video of the December riots shows that police officers were not attacked, and therefore, the use of weapons was unjustified. In fact, during the trial in the case of the police officers the court admitted that the December riots began by no fault of the striking oil workers.

Let us recall that the trial of 37 oil workers who were accused of organising mass riots in December 2011 in Zhanaozen, started in Aktau, on the 27th of March, 2012. During the judicial proceedings, most defendants – oil workers, stated that during the investigation, they were subjected to physical and mental torture. Later, many witnesses began to state the same. Despite this, on the 3rd of May, 2012, at the next court hearing, prosecutors issued a statement with a refusal to institute criminal proceedings against police officers: “The reports of ‘torture’, which defendants described in their statements to the prosecutor, requiring legal evaluation of actions conducted by law enforcement officers, have not been confirmed. Therefore, the institution of a criminal case against them was denied”.