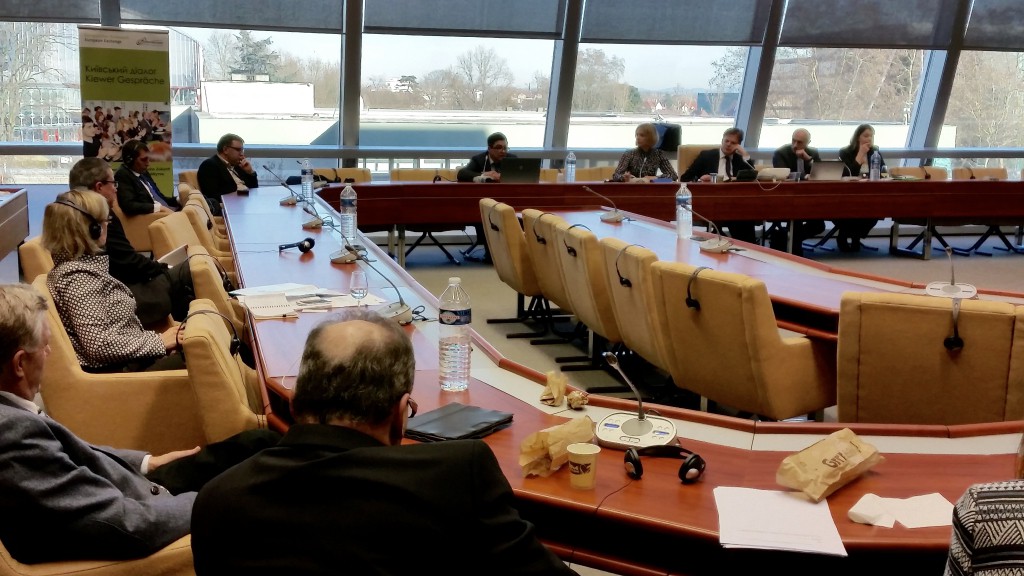 On Monday, 25 January 2016, during the year-opening session of the Parliamentary Assembly of the Council of Europe (PACE) in Strasbourg, representatives of the Ukrainian and Russian civil society gathered at an event organized by the Open Dialogue Foundation and the Kyiv Dialogue, to discuss with the members of the Assembly on the situation of Ukrainian political prisoners in Russia and the implementation of the Minsk Agreements.

The central part of the event was the presentation of the joint Open Dialogue Foundation and Euromaidan SOS report, entitled ‘28 hostages of the Kremlin’, which details individual cases of mostly Ukrainian citizens, unlawfully detained by the Russian Federation and currently imprisoned in Russia or on the occupied territories of Crimea.

Maria Tomak, one of the co-authors of the report, representing the Euromaidan SOS initiative, briefly outlined the typology of the cases described in the report. She underlined the importance of maintaining the international focus on all of the cases, including those less publicized. The #LetMyPeopleGo campaign, which the Open Dialogue Foundation strongly supports advocates internationally for the release of all those unlawfully detained by Russia in the wake of the current conflict with Ukraine. Sergey Davidis from the Human Rights Centre “Memorial”, based in Moscow, indicated a series of legal violations related to the cited cases, drawing attention to such problems as lack of fair trial, high level of politicization of the Russian courts and obstacles in access to legal representation, to name a few. In many cases, torture and ill treatment in detention are a sad reality that calls for a strong reaction of the international community. Trumped up charges, lead to prolonged pre-trial detention and Kafka-style mock trials, which leave a permanent psychological and physical stamp on the victims, often putting even their life at risk.

The courage of the Ukrainian hostages can cost them their health or even life, as we can see in the case of Nadiya Savchenko, who is currently for a second time on a long-term hunger strike. Our role is to make sure that each and every one of these persons is known to the wide public by name, and that the world knows about the horrible acts of torture and ill treatment used against them and can react to demand their release.

This issue relates directly to a broader debate on the level of implementation but also the general feasibility of the so-called Minsk Agreements, which amongst others, foresees the exchange of prisoners of war between Russia and Ukraine. Olexandr Pavlichenko from the Kharkiv Human Rights Protection Group indicated a number of general and legal problems, standing on the way to the implementation of the Minsk Agreements, ultimately making them impossible to fulfil. One of the examples provided related to the unresolved grey zone of the Donbas region. Not implementing proper terminology on the ongoing conflict, and thus lacking clear indication of the jurisdiction under which Donbas falls, de facto precludes it from any possibility of having properly organized local elections.

Other issues discussed in relation to the Minsk Agreements included controversies around the requested amnesty, in particular in the context of potential applications to ICC, as well as, basic unacceptability of the amnesty for those who committed serious crimes against the population of the region and could, as a result, remain eligible to be elected to the local authorities structures.

The Open Dialogue Foundation partners with local experts and international organisations to foster a broader debate on the issues central to the advancement of democracy, peace and progress in the Ukrainian society. We are convinced that international pressure is key in obtaining the liberation of the political prisoners, currently unlawfully detained in the Russian Federation. At the same time, objective monitoring and high quality assistance and support to Ukraine is necessary in order to foster pro-democratic reforms.