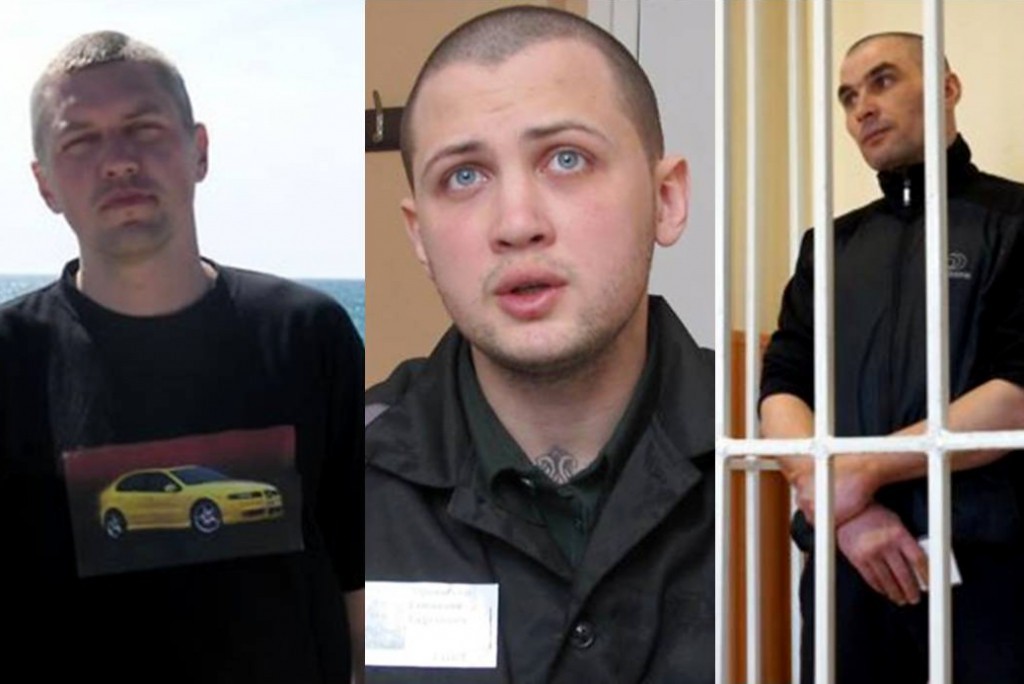 Stanislav Klykh: the defendant’s mental illness was not an obstacle to his criminal prosecution

Stanislav Klykh (aged 41, a citizen of Ukraine) is one of the defendants in the so-called ‘Chechen case’ – a fabricated criminal case against senior Ukrainian officials (including the current Prime Minister, Arseniy Yatsenyuk) for crimes committed on the territory of the Russian Federation during the First Chechen War in the mid-1990s. Another individual accused in the case is Ukrainian, Nikolay Karpyuk. Analysis of the indictment act in the criminal case has shown that it was produced in violation of the Criminal Code and the Code of Criminal Procedure of the RF, it includes descriptions of nonexistent crimes, it contains a large number of factual errors and has been, most probably, constructed only on the basis of a false testimony given by one of the witnesses and the self-incrimination of the accused under the influence of torture.

On 19 January, 2016, it transpired that a judge of the Supreme Court of the Chechen Republic, Vakhit Ismailov had suspended the court trial of the Karpyuk-Klykh case and ordered that one of the accused – Stanislav Klykh – be sent for psychiatric examination. This was done at the request of the defence team of the Ukrainian. According to Klykh’s counsel, Marina Dubrovina, her client had begun to show signs of mental illness: ‘Quite unexpectedly for us, Klykh began to brawl in the courtroom; he began to stamp his feet, shout at participants of the hearing and use swear words’. According to her, Klykh also behaved inappropriately during a conversation he had with the counsels. According to Marina Dubrovina, the manifested behaviour is a consequence of the use of torture and psychological pressure applied towards her client during the preliminary investigation.

In the case that the psychiatric examination concludes that Stanislav Klykh is insane, then his case would be divided into separate proceedings and he would be sent for compulsory treatment. At the same time, the evidence base against the second defendant in the case – Nikolay Karpyuk, would be fundamentallyundermined as the charges against him are based on Klykh’s testimony.

As expected, the examination did not confirm the suspicion that Stanislaw Klykh suffers from mental illness, establishing that he is, in fact, sane. During subsequent court hearings, Stanislav Klykh continued to be extremely emotionally unstable, shouting out accusations about judges and public prosecutors. At the hearing on 20 February, 2016, in connection with Klykh’s behaviour, the judge ordered he be removed from the courtroom and announced that the extract from the minutes of the hearing will be sent to law enforcement authorities for inspection and that criminal proceedings may be imitated against Stanislav Klykh for insulting the public prosecutor as a representative of the authorities during the performance of his duties (Art. 319 of the CC of the RF).

Currently, Stanislav Klykh and Nikolay Karpyuk are being held in custody in a detention centre in Grozny. They both face life imprisonment. Even if the court acquits the defendants, Klykh will not be released, as he faces criminal prosecution for insulting the public prosecutor.

Gennadiy Afanasyev: the toughening of the conditions of his detention

Gennadiy Afanasyev (aged 25, a citizen of Ukraine) is a defendant and one of the key witnesses in the case of ‘the Crimean terrorists’ – a fabricated criminal case against the Crimean civil society activists concerning charges of allegedly committing terrorist acts on the Crimean peninsula. All four defendants in the criminal case (Gennadiy Afanasyev, Oleg Sentsov, Aleksandr Kolchenko and Aleksey Chirnyi) were sentenced to prison terms ranging from 7 to 20 years.

Under the pressure of torture, as well as in exchange for a more lenient prison term, Gennadiy Afanasyev agreed a plea bargain with the investigative bodies and admitted his guilt. He also slandered other defendants in the criminal case. On 17 December, 2014, Gennadiy Afanasyev was sentenced to 7 years in prison.

In the trial against Oleg Sentsov and Aleksandr Kolchenko, Gennadiy Afanasyev was one of the main witnesses, and, according to the intentions of the prosecution, he was to give a testimony that would confirm the terrorist activity of Sentsov and Kolchenko. However, during the trial, Afanasyev recanted his previous testimony, stating that it had been given under torture. After the incident, representatives of the Russian law enforcement and prison systems began to requite Gennadiy Afanasiev for his act. The FSB investigator openly warned Afanasyev that he would be sent to serve his sentence in the ‘white bear area’ (which means – the North of Russia). It is a well-known fact that it was initially planned that Gennadiy Afanasiev would serve his sentence in a prison in the Kurgan province, which is located in the south of Russia. However, following the incident at the trial, it was decided that he would be transferred to the northern part of the country, i.e. to colony №25, Syktyvkar, the Komi Republic. He was transferred there in October 2015.

Shortly after his arrival at the colony, Afanasyev’s personal belongings were searched. As a result, a blade was allegedly found. Afanasyev stated that the blade must have been planted. After this incident, he was sent to solitary confinement. During a subsequent search, guards allegedly found another contraband object: a SIM card for a mobile phone. According to the prisoner, it had also been planted by the colony’s guards. On one occasion, Afanasyev received an admonition for praying at night. ‘Repeated violations’ served as a pretext for harshening the conditions of his detention – on 9 February, 2016, Afanasyev was transferred to single-space facility №31 in the town of Mikun, 100 km from Syktyvkar. The ‘single-space facility’ is used as a form of disciplinary punishment in the Russian penitentiary system. Conditions of detention in various single-space facilities are extremely severe – many prisoners are held in tiny cells, designed for just a few people, they are only entitled to one short visit and one parcel a year. Gennadiy Afanasyev must spend at least a year in the single-space facility.

Gennadiy Afanasyev also suffered a violation of his right to receive appropriate medical care. On 16 February, 2016, in the colony, Afanasyev was examined by a medical doctor and diagnosed with subacute streptoderma. In some cases, the disease can cause side effects such as sepsis. In spite of this, the only treatment he was prescribed was a course of zelyonka (a solution of brilliant green).

The aim of the Russian authorities is to harshen GenNadiy Afanasyev’s conditions of detention to the greatest possible extent; as a means of revenge for his actions during the trial of Oleg Sentsov and Aleksandr Kolchenko.

Sergey Litvinov: following the failed accusations of war crimes, attempts have been made to accuse the Ukrainian man of robbery

Sergey Litvinov (aged 32, a citizen of Ukraine) has been subjected to criminal prosecution under several trumped-up charges in Russia. Since August 2014, he has been held in a detention centre in Rostov-on-Don.

First, as a consequence of the exertion of torture and unlawful methods of inquiry, Sergey Litvinov incriminated himself by ‘confessing’ to a number of grave crimes on the territory of Luhansk province – the murder of 39 men, the rape and murder of eight women and the murder of a 12-year-old girl. Litvinov was charged with the murder of two or more persons (Art. 105, section 2 of the CC of the RF) and the use of prohibited means and methods of warfare (Art. 356, section 1 of the CC of the RF), which is punishable by a sentence of life imprisonment. Later, it became clear that the articles of the charges had been invented by investigators and were not supported by any material evidence. Because of this, the Russian investigative authorities did not file the indictment act with the court.

However, rather than release Sergey Litvinov, another criminal case was initiated against him on charges of robbery (Article 162, section 3 of the CC of the RF). According to investigators, in the summer of 2014, Litvinov, along with two ‘representatives of the law enforcement agencies of Ukraine’, in one of the villages in the Luhansk province, committed robbery with the use of a Kalashnikov rifle against a citizen of the Russian Federation. The attackers allegedly hijacked two cars that belonged to the victim and caused him bodily harm.

The charge of robbery was brought against Sergey Litvinov on 8 June, 2015, nearly a year after his arrest. On 21 January, 2016, the preliminary court hearing into the case commenced. Sergey Litvinov’s counsel has evidence which proves the fabrication of criminal case and intends to file a petition to terminate criminal proceedings due to the fact that the robbery didn’t take place. According to the counsel, the citizen of Russia (the victim in the case) wasn’t even in Ukraine at the time of the alleged robbery, and in order to prove his ownership of the vehicles, he had submitted false documents to the investigative bodies.

Having realised that the second criminal case against Litvinov was falling apart due to a lack of evidence, the law enforcement agency tried to sow discord in the Ukrainian defence. At a preliminary hearing, they tried to involve Public Attorney Oksana Kharchenko in the case, who had allegedly expressed an unprompted desire to defend Sergey Litvinov. However, the defendant already had two defenders – Viktor Parshutkin and Viktor Vinogradov, and hence, he refused to make use of the services of Oksana Kharchenko, having asked for her removal from the case.

On 25 February, 2016, in the Tarasovskiy District Court of Rostov province, the first hearing on the merits of the case of Sergey Litvinov was to be held. As neither the aggravated Russian citizen, nor the witness (a security officer of the so-called ‘Luhansk People’s Republic’), nor the experts appeared in court, the judge postponed the hearing until 10 March, 2016. Sergey Litvinovis facing from 7 to 12 years’ imprisonment.