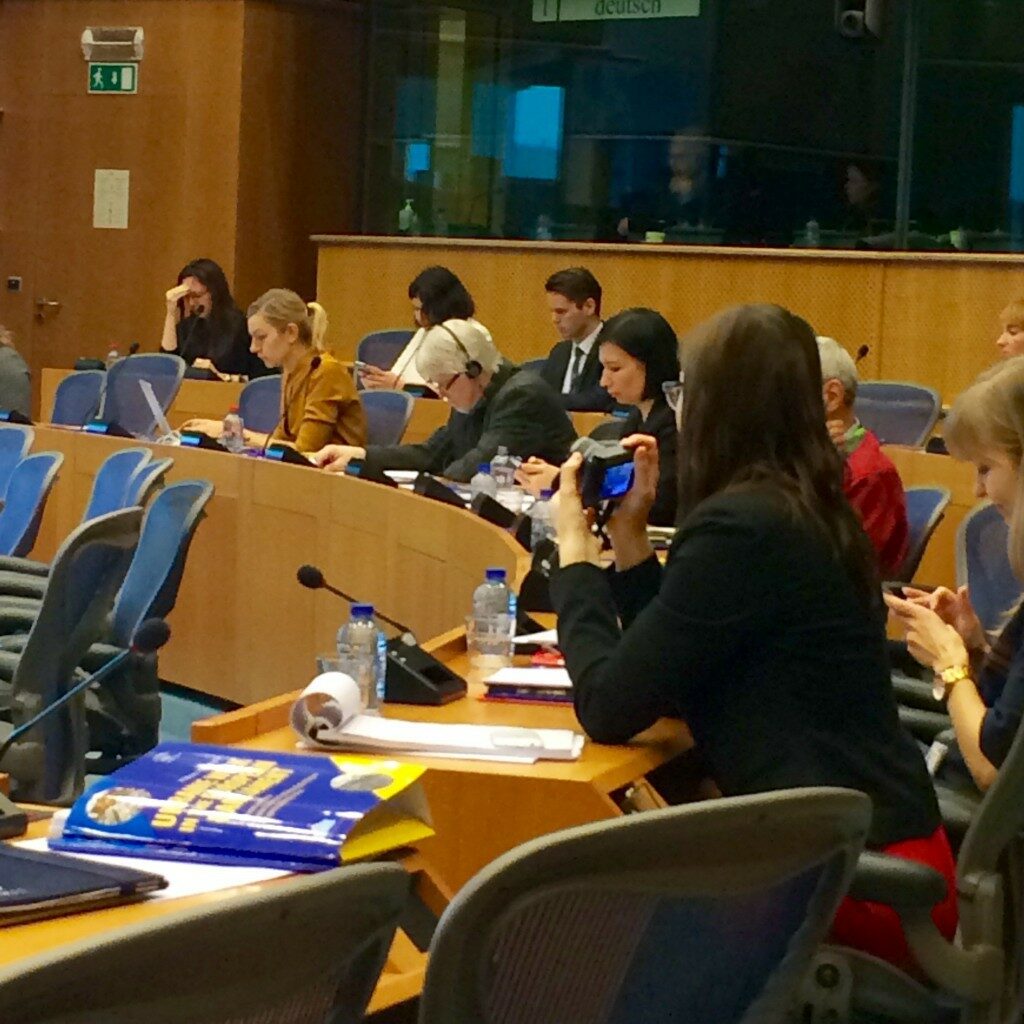 Ukraine Week in the European Parliament – high-level conference to discuss good governance, reforms agenda and capacity-building of the Verkhovna Rada of Ukraine

From 29 February to 2 March, a high-level EU-Ukraine conference took place in the European Parliament, seeing a sizeable Ukrainian delegation of around 70 people attending. Over 40 members of the Verkhovna Rada (Ukrainian parliament), including its Speaker Mr Volodymyr Groysman, Deputy Speaker, Mrs Oksana Syroid, Chairs of the key committees and Heads of political factions, as well as secretariat staff arrived to Brussels for the Ukraine Week. A unique exercise, never before organised with any other national parliament, aimed at discussing jointly good parliamentary practices and working together on the recommendations from the former president of the European Parliament, Pat Cox’s report on internal reform and capacity-building roadmap for the Ukrainian parliament. Delegates from the national parliaments of the EU member states were also present.

At one point or another, representatives of the EU institutions, including the EEAS and the European Commission, all underlined the importance of Ukraine as the EU’s close neighbour and partner and reassured their Ukrainian counterparts of the EU’s strong and standing commitment and support for the country’s reform and peace process, leading to further democratisation. At the same time, key EU figures, including the President of the European Parliament, Mr Martin Schulz, the EU Commissioner for European Neighbourhood Policy and Enlargement Negotiations, Mr Johannes Hahn, the Deputy Secretary-General of the European External Action Service, Mrs Helga Schmidt, as well as the Chairs of the European Parliament’s Foreign Affairs Committee, Mr Elmar Brok, and of the European Parliament delegation to the EU-Ukraine Parliamentary Association Committee, Mr Andrej Plenković, called on the present members of the Verkhovna Rada to persist and to take full ownership over the reform process, which is key for the country to go forward. The EP’s president, Mr Martin Schulz said: “You need our support and you will receive it. However recommendations to reform the VRU should not be put into the filing cabinet, but implemented”.

Strong political messages aside, the event was to provide an opportunity for the Ukrainian and the EU parliamentarians to discuss in smaller groups, along with experts from international organisations and the civil society, on a number of key aspects focusing on good governance, exchanging good practices and capacity-building.

One of the topics discussed was the importance of openness, transparency and accountability of the parliament in Ukraine. Speakers, including the Co-Chair of the Greens/ALE group in the European Parliament, Mrs Rebecca Harms and the Head of the EU Delegation in Ukraine, Mr Jan Tombiński, underlined the importance of ensuring the existence of well-functioning institutions, such as the parliament, which has to go beyond the political struggles of the moment. “It’s up to the members of the parliament to build their political landscape”, said Ambassador Tombiński. And citizens have to know what given politicians and political parties stand for, which values and standpoints they support. This is strongly linked with the political accountability, and Ukraine still has a long way to go in this respect. Mrs Rebecca Harms also called on the members of the Verkhovna Rada to make an effort to split the close link between business and politics in Ukraine. She raised a point that was debated many times during those three days and that has been on the table for quite some time, i.e. the level of salaries of the politicians in Ukraine. The salaries being currently extremely low – it proves highly improbable to eliminate the influence of the oligarchs on the parliament. Adequate salaries do not ensure, of course, good governance and healthy political atmosphere but they are one of the elements, without which the aforementioned is not possible at all. A lot was said about the importance of the process of party building and functioning, as well. Strong and properly drafted political programmes are crucial as they allow citizens to evaluate the parties’ work throughout the legislation and to keep them in check with their promises. These steps do not only encourage openness and transparency but they also create political accountability and help build trust in the parliament as a body representative of the citizens. Ms Svitlana Zalishchuk, who co-chaired the discussion, drew attention to some positive legislative proposals that have been put forward but that still faced strong resistance and, so far, failed to mobilise the majority in the parliament.

The Open Dialog Foundation has long been urging more transparency and openness in the work of the Ukrainian institutions. We have also been calling for increased and more direct relations and contacts with the citizens. People are often not being explained properly what the planned and debated reforms are really about and what they imply. This provokes, often unnecessary, tensions and opens the door to those who want to instigate mistrust and conflict and spread the pro-Kremlin propaganda.

An interesting discussion arose on the ways of building a culture of dialogue and reaching a consensus in a multi-party environment. Speakers focused on the great responsibility that the members of the parliament towork together in an atmosphere of mutual respect towards common goals of improving the situation of the citizens. Reaching a consensus is not easy when opposing views are on the table but stalling in a clinch without giving in a bit on certain issues, while achieving your political goals on others will not lead to any positive developments. As argued by guests and experts from Norway and Belgium, it is important to talk to each other and stay tough when it comes to the substance of the debate but soft when it comes to people. Mutual respect is crucial. Lolita Čigãne, a Latvian MP and Chair of the European Affairs Committee in the Latvian parliament underlined the importance of a strong mobilisation above party divisions, which had proven effective in Latvia in countering high risks of becoming a negative example of a failed story in the European Union. However, discussing the specificities of the process that Ukraine is currently undergoing, bearing in mind the Russian aggression and the struggle to leave behind the legacy of corrupt and cleptocratic post-Soviet system, she lauded the role of neighbouring countries. In Latvia’s case, the other two Baltic states: Estonia and Lithuania. In Ukraine’s case – Poland – a strong ally and advocate of Ukraine in the EU.

The collaboration between the Verkhovna Rada and the civil society in the context of the roadmap for reforms in 2016 was part of a number of thematic discussions throughout the Ukraine Week. The importance and the role of the civil society in supporting the drive for positive legislative proposals and concrete change in the country are undisputed. The non-governmental organisations’ role is also to keep the politicians and the institutions in check.

The “Ukraine week” ended on Wednesday, 2 March, with the signing of an “Administrative cooperation agreement” between the EP and VRU secretariats, represented by Mr Klaus Welle, Secretary-General of the Europe Parliament, and Mr Volodymyr Slyshynskyi, First Deputy Head of the Secretariat of the Verkhovna Rada. Both sides, Mr Andrej Plenkovič for the European Parliament and Mr Volodymyr Groysman for the Verkhovna Rada, appreciated the initiative and urged that this be the first of a series of such events, to be held either in Brussels or in Kyiv.  The Speaker of the Verkhovan Rada, Mr Volodymyr Groysman, acknowledged the opportunity to create additional channels of contacts and communication that the Ukraine Week presented to both sides, echoing earlier comments by Mrs Helga Schmidt, who also noted that the importance of such meetings lies not only in the panel debates but also in bilateral meetings that take place on the margins and that allow for the creation of stronger ties between the counterparts. Mr Ostap Semerak, Chair of the Verkhovna Rada delegation to the EU-Ukraine Parliamentary Association Committee thanked for the interesting debates and important recommendations, included in the Cox report, while committing to bring concrete results to the table for the next meeting of this kind.

The Open Dialog Foundation welcomes the initiative of the European Parliament to organise the Ukraine Week as a yet another effort to show commitment and support to Ukraine on its path towards reforms. We acknowledge the role of the European Parliament in mobilising experts to facilitate the Verkhovna Rada’s capacity-building and to foster a closer and more direct dialogue with the Ukrainian counterparts. The Ukraine Week is a good example of learning by doing. At the same time, we underline yet again the need to work closely on ensuring that reforms in Ukraine are not only tabled and voted but also, subsequently, implemented and that they work for the benefit of the Ukrainian citizens.