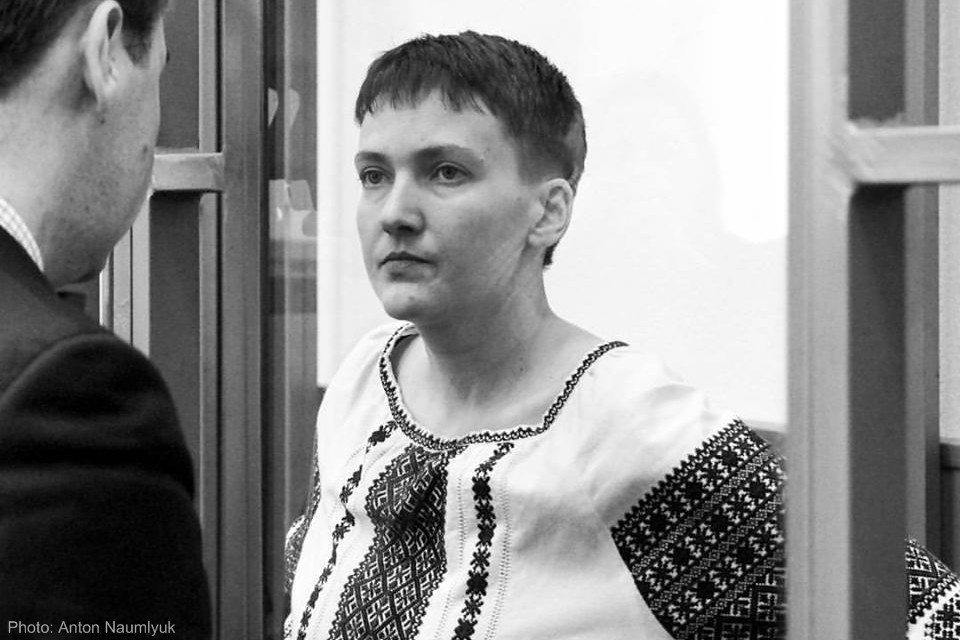 On 4 March, 2016, Nadiya Savchenko officially went on a ‘dry hunger strike’, refusing even water. Prior to that, for 77 days she was on a hunger strike, taking only water and tea. Such a radical move is a reaction to yesterday’s unlawful action of the court which did not permit the Ukrainian woman to deliver her final speech at the trial. “A dry hunger strike is a protest against the actions of the Russian authorities, the Russian intelligence and law enforcement services, investigative bodies, the court and the Prosecutor’s Office and the fact that they make attempts to cover up their crimes“, – Savchenko wrote in a statement on the hunger strike.

The Open Dialog Foundation published the text of Nadiya Savchenko’s final speech which she was not permitted to deliver in the court:

„I do not recognise any guilt, nor the verdict, nor the Russian court. In the case of a guilty verdict there won’t be an appeal. I want the whole democratic, civilised world to understand that Russia is a Third World country with a totalitarian regime and a despotic dictator that spits on human rights and international law.

It’s an absurd situation when those who kidnap people and subject them to torture then also pretend they have the right to judge them! What kind of fair trial can we be talking about here?! In Russia there are no courts or investigations! There’s a Kremlin puppet farce going on here. And I think it’s absolutely pointless to waste time in my life on taking part in it!

So there won’t be an appeal, but there’ll be the following: after the verdict I’ll continue my hunger strike for another 10 days, until the sentence comes into force, regardless of the translation into Ukrainian, because they can also drag that out for a long time. In 10 days I’ll announce a dry hunger strike, and then Russia has no more than 10 days to return me to Ukraine, from where I was kidnapped! And I couldn’t care less how they justify this! I’ve heard about Petro Alexeevich Poroshenko’s fairly decent diplomatic skills. I hope that his diplomatic skills are enough to come to an agreement in Russia with one idiot, since he promised my mother that I’d be home in time for the 2015 May holidays.

And while they’re bartering over me, life will depart from me and Russia will return me to Ukraine anyway – alive or dead, but it will return me!

And for all those 10 days my sister will stand at the gates of the prison day and night, and she will wait until they release me or carry me out. And if you put her in prison, my mother will come in her place and stand there, she’s 77, will you put her in prison? Then my female friend will take her place, then my male friend, and after them Ukrainian after Ukrainian! And remember – you can’t stuff everyone in here! And while my countrymen are standing there, ordinary, honest and decent Russians in the nearby houses will start bringing them hot tea, sandwiches and warm clothes, because each of them understands that tomorrow any of their children could be in my place in this prison of all peoples that goes by the name Russia!

And that’s how Maidans start! Do you need it?! You fear it like fire! That’s why it’s better for the Kremlin to return me to Ukraine as soon as possible and alive!!!

And it’s better for the whole world with its democratic values to learn the lessons of history in time and remember that once Europe was tolerant towards Hitler, and America wasn’t decisive enough and that led to World War II. Putin is a tyrant with imperial habits, a Napoleon complex and a Hitler complex rolled into one! And the bear doesn’t understand human language, he only understands the language of strength. That’s why if we don’t become more decisive and don’t determine the right priorities in time, we’ll soon have a World War III!

And I, now already a politician, will not offer my hand to Russia in the political arena. You don’t offer your hand to those who held you in handcuffs, and your people in shackles. But in making all my political decisions I will always think about how they affect ordinary people, both in Ukraine and in Russia. Because in Russia, despite everything, there are still many honest, good and decent people“.