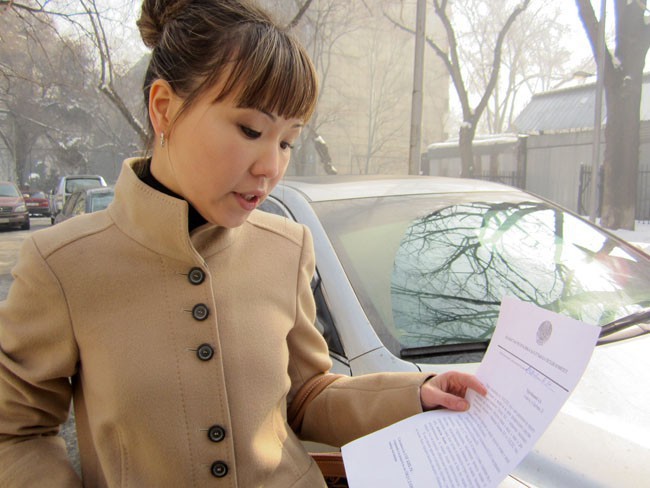 On the 6th of June, 2012 in the morning, Alia Turusbekova received threats with the demand to ‘shut up’, or “prison officials will  sort things out with her husband” from a representative of the NSC: Nurlan Mazhilov. Threats were passed through a lawyer, of the arrested, Vladimir Kozlov. On the same day, after lunch, a ball bearing fell off the rented car in which Alia was driving to Zhanaozen, and it turned out that three nuts were missing from the wheel. The wife of the opposition politician is convinced that the NSC are progressing from threats to actions.

On the 7th of June, 2012, Alia Turusbekova finally succeeded in seeing her husband, Vladimir Kozlov, after his transfer to the detention facility in Aktau. Alia’s last meeting with her husband took place more than a month ago – on the 27th of April, 2012, although under the law of the RK, detainees are entitled to two visits with their family members per month. In an interview given to the Kazakh media, the wife of the leader of the ‘Alga’ opposition party informed of the threats made against her by Nurlan Mazhilov, a representative of the National Security Committee the day before the meeting with her husband. “Before his departure from Almaty to Aktau, Vladimir Ivanovich’s lawyer received a phone call from NSC senior officials. He asked the lawyer to say “a big hello” to me and explained that if I continue to talk about Kozlov everywhere, give interviews, etc., then they will do everything that they can to terrorize the detention facility, where my husband is being held, with numerous inspections. And then, according to them,  the employees of the detention facility will settle the account with my husband, “- said Alia Turusbekova.

It seems that this time the threats did not end simply with uttered words: on the 6th of June, 2012 (the day before the meeting with Vladimir Kozlov) A. Turusbekova had an suspicious traffic accident, which almost led to tragic consequences. “I had to go to the Department of National Security Committee (NSC) in Zhanaozen in order to take the permit. On the 6th of June we went there, and at the entrance to the city, near the traffic police post, our car broke down suddenly – a ball bearing from the front wheel fell off. It was very unexpected – it was simply completely unscrewed. If we had been driving at a high speed, this situation could have ended very sadly. Later, during the inspection of the car it was established that the rear wheel was missing three screws”, – said A. Turusbekova. In her opinion, there is a direct link between the threats and the traffic accident.

The Open Dialog Foundation hereby expresses its concern over the threats made to Alia Turusbekova and her husband, and opposition politician Vladimir Kozlov. We would like to underline that due to numerous attempts to exert pressure on Vladimir Kozlov and his family by the National Security Committee, there are grounds to believe that if anything happens to Vladimir Kozlov or the members of his family, it is the National Security Committee, and particularly Nurlan Mazhilov, who should be held responsible.