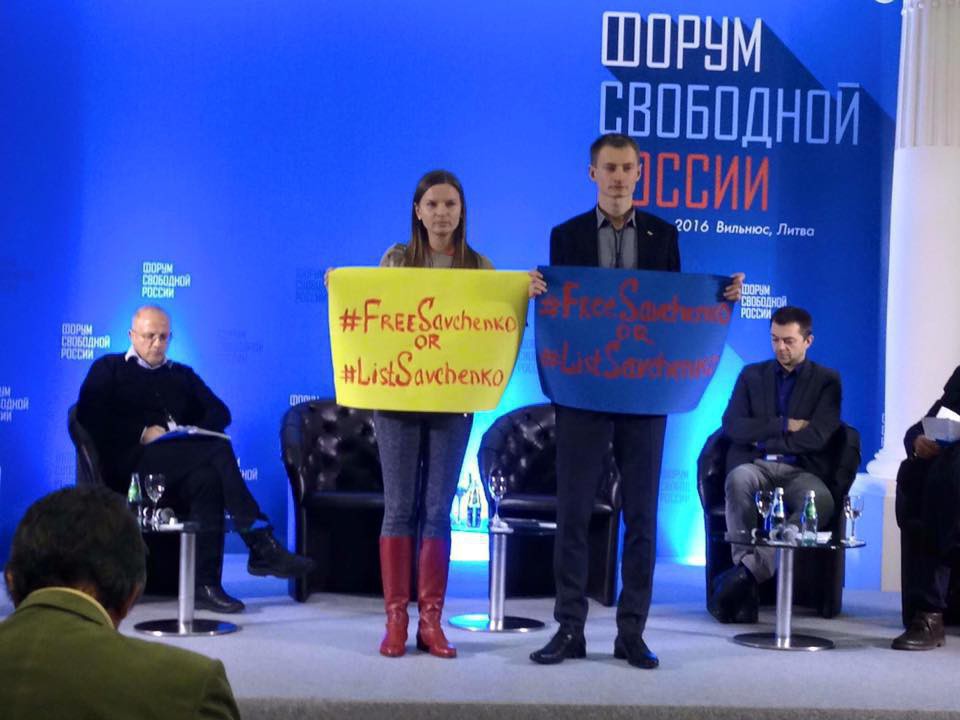 At the end of the Free Russia Forum, which took place on 9 and 10 March 2016 in Vilnius (Lithuania), the participating representatives of the Russian opposition and civil society adopted a resolution supporting the call for the introduction of personal sanctions against individuals responsible for the persecution of the Ukrainian pilot and Member to the Verkhovna Rada, Nadia Savchenko.

The resolution was adopted by acclamation. During the event, many representatives of the Russian opposition, independent media, experts and non-governmental organisations, including those living abroad for political reasons, expressed their clear support for the world wide #FreeSavchenko action.

The “Savchenko List” was first presented by the Open Dialog Foundation experts (working closely with Nadiya Savchenko’s lawyers), during a press conference on 13 February 2015 in Kyiv. On 6 April 2015, Batkvishchyna party handed in to the Verkohva Rada of Ukraine a draft text of a resolution supporting the Savchenko List and, thus, the introduction of the personal sanctions as suggested in the document. Subsequently, on 22 April 2015, following the voting in the Rada, the resolution was signed by Volodymyr Groysman. On 8 March 2016, the initiative was taken up by a Lithuanian Member of the European Parliament, Vice-Chair of the ALDE Group, Petras Austrevicius and supported by 56 other Members of the European parliament.

On 9 March 2016, news was spread about a joint initiative of Ministers of Foreign Affairs of 5 EU countries (Poland, Lithuania, Sweden, Romania and Great Britain) calling on the High Representative of the Union for Foreign Affairs and Security Policy, Federica Mogherini, to introduce targeted sanctions against Russian individuals involved in Savchenko case.

Additionally, during a manifestation of solidarity with Nadiya Savchenko, organised by the EuroMaidan Warsaw and by the Open Dialog Foundation on 9 March 2016, under the Russian embassy in Warsaw, signatures were being collected under a petition calling for the immediate release of Nadiya Savchenko and for the introduction of the Savchenko List and sanctions. 300 persons signed the call. On the same day, the Polish Sejm (lower chamber of the parliament) unanimously adopted a resolution calling on the Russian authorities to release the Ukrainian hero.

The following well-known figures were amongst the active participants of the Free Russia Forum in Vilnius: Garri Kasparov, Bożena Ryńska, Andrey Illarionov, Yevgeny Chychvarkin, Alfred Kox, Yevgeniya Chyrikova, Zoya Svietova, Lev Ponomariov, Illia Ponomariov and many others. The “Savchenko List” features the President of the Russian Federation, Vladimir Putin, on the first place, followed by the highest rank Russian officials (i.a. the chairmen of the Russian Duma, Sergey Naryshkin) and persons directly involved in the kidnapping, imprisonment, coercive psychiatric examinations and the farce of the court trial of Nadiya Savchenko (i.a. the heads and employees of the Russian Security Services, prosecutors, judges: the head of the FSB Aleksander Bortnikov, the head of the Investigative Committee of the Russian Federation, Aleksander Bastrykin, the leader of the so-called Luhansk People’s Republic, Igor Plotnitsky).

Actions of support, calling for the introduction of the “Savchenko List“, are taking place around the world, with an active participation of Ukrainian and other supportive organisations, as well as Western politicians involved in supporting Ukraine.

Following the Open Dialog Foundation consultations with Nadiya Savchenko’s lawyers, as well as with the representatives of the Russian opposition and civil society we have decided to broaden the “Savchenko List” with new names of individuals that bare responsibility for Nadiya Savchenko’s illegal detention in Russia.

The list has been included in the text of a resolution adopted unanimously during the Free Russia Forum. It includes 49 names and is headed by the President of Russia, Vladimir Putin.