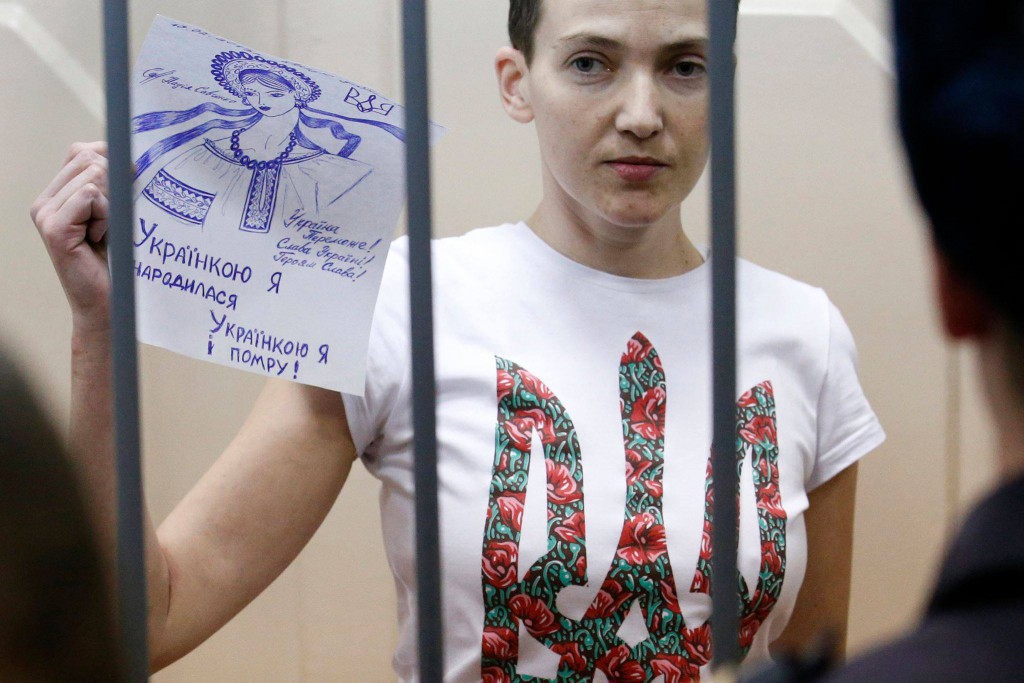 The health condition of the Ukrainian pilot and member of the Verkhovna Rada of Ukraine, Nadiya Savchenko, illegally held in the Russian prison is critical. Due to the recent extremely worrying developments and following consultations with Nadiya Savchenko’s lawyers, as well as with the representatives of the Russian opposition and civil society we have decided to broaden the “Savchenko List” with new names and to make it public.

The updated list was first presented on 10 March 2016 in the form of a resolution, unanimously adopted in Vilnius during the Free Russia Forum (with well-known participants such as Garri Kasparov, Bożena Ryńska, Andrey Illarionov, Yevgeny Chychvarkin, Alfred Kox, Yevgeniya Chyrikova, Zoya Svietova, Lev Ponomariov, Illia Ponomariov and many others).

The list still features the President of the Russian Federation, Vladimir Putin, on the first place, followed by the highest rank Russian officials (i.a. the chairmen of the Russian Duma, Sergey Naryshkin) and persons directly involved in the kidnapping, imprisonment, coercive psychiatric examinations and the farce of the court trial of Nadiya Savchenko (i.a. the heads and employees of the Russian Security Services, prosecutors, judges: the head of the FSB Aleksander Bortnikov, the head of the Investigative Committee of the Russian Federation, Aleksander Bastrykin, the leader of the so-called Luhansk People’s Republic, Igor Plotnitsky).

The new names on the list include those individuals who have testified falsely in court or those who have publicly called for exerting torture or ill-treatment on Nadiya Savchenko fuelling the falsely instigated hate speech against her, such as Vladimir Zhirinovsky, head of the LDPR faction in the Russian parliament.

The Open Dialog Foundation welcomes the support for the initiative expressed by the Ukrainian President, Petro Poroshenko, and hopes that the authorities of Ukraine will soon introduce tough sanctions against the persons listed on the “Savchenko List“, including the representatives of the highest Russian authorities. Sanctions against assets located in Ukraine and controlled by these individuals could be particularly effective.

We are convinced that only a strong and immediate pressure on the Russian authorities can lead to the release of Nadiya Savchenko. One of the most concrete tools to exert such pressure is the “Savchenko List“, which targets personal interests of key Russian political decision makers and other representatives of the regime.

The “Savchenko List” was first presented by the Open Dialog Foundation experts (working closely with Nadiya Savchenko‘s lawyers), during a press conference on 13 February 2015 in Kyiv. On 6 April 2015, Batkvishchyna party handed in to the Verkohva Rada of Ukraine a draft text of a resolution supporting the “Savchenko List” and, thus, the introduction of the personal sanctions as suggested in the document. Subsequently, on 22 April 2015, following the voting in the Rada, the resolution was signed by Volodymyr Groysman. On 8 March 2016, the initiative was taken up by a Lithuanian Member of the European Parliament, Vice-Chair of the ALDE Group, Petras Austrevicius and supported by 56 other Members of the European parliament.

On 9 March 2016, news was spread about a joint initiative of Ministers of Foreign Affairs of 5 EU countries (Poland, Lithuania, Sweden, Romania and Great Britain) calling on the High Representative of the Union for Foreign Affairs and Security Policy, Federica Mogherini, to introduce targeted sanctions against Russian individuals involved in Savchenko case.

Further analysis and work on keeping the list up-to-date is ongoing.

The Open Dialog Foundation has been campaigning for the release of Nadiya Savchenko since 2014. The Foundation hired a team of Russian lawyers to defend the Ukrainian pilot, headed by Mark Feygin, organised 6 monitoring missions to Russia, published numerous reports about Savchenko’s case and, along with the EuroMaidanSOS initiative, has been actively participating in the #LetMyPeopelGo campaign, aimed at the release of the so-called Hostages of the Kremlin (de facto political prisoners), imprisoned in Russia.