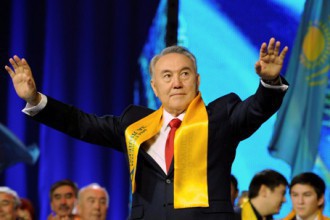 The President of the European Council, Donald Tusk, is set to meet with the President of Kazakhstan, Nursultan Nazarbayev on Wednesday, 30 March 2016. The meeting comes at an important time in the EU-Kazakhstan relations, just a few months after the signing of the Enhanced Partnership and Cooperation Agreement. At the same time, international NGOs and human rights organisations have all been increasingly criticising Kazakhstan for its continuous clampdown on political opposition, confirmed in the recent snap parliamentary elections that saw no genuine opposition to the President’s ruling Nur Otan party. Regardless of the EPCA’s clear provisions on democracy and human rights, which include calls for increased respect for freedom of speech and political expression, Kazakhstan has actually stepped-up its repressive actions against critical voices in the country and abroad.

Donald Tusk should use the occasion of the meeting not only to exchange political pleasantries but also to address the sensitive and uncomfortable issues in the EU – Kazakhstan relations, including the continuous incarceration of the opposition leader Vladimir Kozlov and the general atmosphere of repression, said Lyudmyla Kozlovska, President of the Open Dialog Foundation.

Vladimir Kozlov, one of the key opposition figures in Kazakhstan, leader of the now banned opposition movement Alga!, has been in jail serving his 7,5 years prison term, following a mock trial, widely criticised for numerous procedural irregularities. International community has been calling for his release, including the European Parliament in its numerous resolutions, most recently the urgent resolution on the freedom of expression in Kazakhstan, adopted during the March plenary session in Strasbourg.

The recent months have also shown increased repressive activity against independent media. A number of journalists and bloggers were detained end of last year, including the editor of the Nakanune.kz web portal, Gyuzyal Bayadalinova, accused of “spreading false information” and Bolatbek Blyalov, Head of the Institute for Democracy and Human Rights, convicted in January 2016 of “inciting social and national hatred”, because of his open criticism towards Russian actions in Ukraine.

It is deplorable that while the High Representative, Federica Mogherini, was in Astana to sign the EPCA, which should also lead to the improvement in the area of human rights respect and democratisation, the Kazakh authorities were actually detaining journalists and bloggers, oppressing the very fundaments of democracy, the freedom of expression, reiterated Anna Koj, Head of the EU Office of the Open Dialog Foundation.

While the human rights situation in Kazakhstan has been deteriorating, the regime of President Nazarbayev has also been chasing Kazakh critical voices living abroad. In a series of lawsuits brought in the US against the opposition media, Respublika, banned in the country and forced to operate from abroad, Kazakhstan has been trying to abuse the US anti-fraud legislation (CFFA) to silence its critics. The procedures are still on-going. Furthermore, in what now has become a long international battle, Kazakhstan has been misusing the Interpol system, often via corrupt proxies from Russia or Ukraine, to chase opposition figure, Mukhtar Ablyazov, his family members and former associates that reside in the EU. As would appear from information made public in a leak scandal that saw hundreds of private correspondence of high-level Kazakh officials and politicians disclosed, the Kazakh authorities have been spending enormous amounts of money on these cases, intervening – often illegally – in the legal proceedings and extradition cases, corrupting investigators in Russia and Ukraine and trying to pressure representatives of the justice systems in a number of EU Member States.

We call on the European Council President, Donald Tusk, to address these issues in his talks with the Kazakh President. Kazakhstan should ensure full respect for democratic standards and human rights if it wants closer cooperation with the European Union. Political prisoners should be unconditionally released and media, journalists and bloggers, as well as all citizens should be able conduct their professional activities even if it includes expressing criticism towards the actions and policies of the authorities.