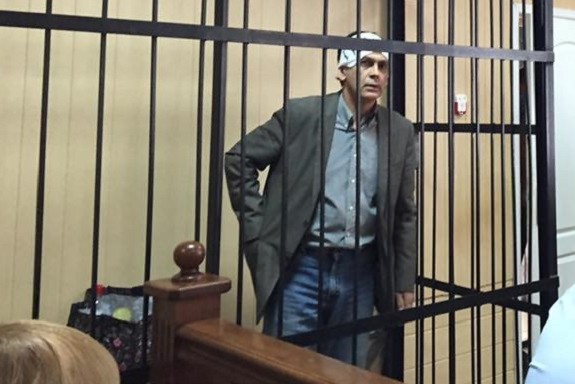 In protest against inhumane treatment, Aleksandr Orlow has gone on hunger strike

A citizen of the Republic of Poland, Aleksandr Orlow, who has been held in custody without having been sentenced for over 4 years now, went on hunger strike in protest against the unbearable conditions of detention and torture he is being subjected to in the detention facility where he is being remanded.

Throughout the entire duration of the criminal case against Orlow, 146 court hearings have been scheduled. Of them, only 52 were held, while others were cancelled for a variety of reasons. As reported by the accused, each time he was transported to court from the detention facility his civil rights were violated which has contributed towards a deterioration in his health condition. His transfer to court is always preceded by an early wake up, and subsequently, a long stay in a smoky, damp, cold and poorly ventilated room (cell). As Aleksandr Orlow suffers from the respiratory tract diseases (chronic bronchitis, allergic asthma), a long stay in such conditions has a negative impact on the state of his health. A similar procedure is also followed when the prisoner is transferred back to the remand facility after the trial.

Such treatment of a suspect constitutes a violation of Article 3 of the European Convention on Human Rights of 1950: “No one shall be subjected to torture or to inhumane or degrading treatment or punishment.”

On 10 March, 2016, during another lengthy (approx. six-hour long) detention in solitary confinement, Aleksandr Orlow’s health condition sharply deteriorated; as a result, he had to seek medical help. In response to another case of inhumane treatment, Aleksandr Orlow went on partial strike (he only drank water). He announced this fact to the administration of the penitentiary facility, the GPU and the judges who are conducting proceedings in his criminal case. “I believe that the order of my delivery to court hearings, established by the administration of Odessa detention facility No. 21, law enforcement bodies and judicial authorities, will clearly lead to a serious deterioration of my health condition, and possibly my death, and this is inhumane treatment I being subjected to” – Aleksandr Orlow enunciated in his statement addressed to the court.

Prolonged starvation can cause permanent damage to Orlow’s health, especially as he is an elderly man (he is 61 years old) who suffers from kidney disease.

On 29 March, 2016, Aleksandr Orlow addressed the court with a motion that he not be transported to court in person given his serious health condition; he requested that the legal proceedings be conducted by a videoconferencing as provided for in Art. 85-3 of the Code of Criminal Procedure. The court did not grant his petition, and Orlow was taken to court by force. However, the court hearing did not take place due to the absence of the lawyer of the aggravated party.

The Open Dialog Foundation hereby expresses its protest against the outrageous incidents of cruel and inhumane treatment Aleksandr Orlow is being subjected to in detention facility No. 21. This treatment directly contravenes Ukrainian legislation, as well as basic principles of international law on the protection of human rights. We hereby call on the leadership of the State Penitentiary Service of Ukraine and the Parliamentary Commissioner for Human Rights to pay close attention to this case and take urgent measures in order to address incidents of violations of the rights of Aleksandr Orlow.

All those wishing to support our demands are kindly requested to send their appeals to the following persons and institutions: