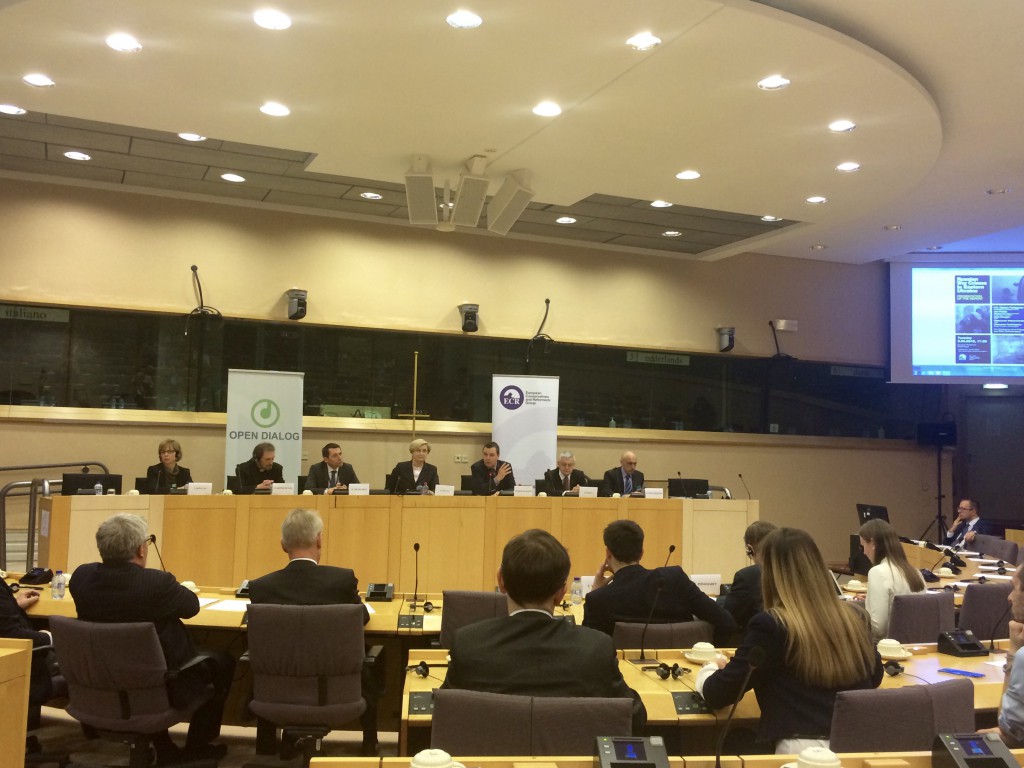 Three reports, covering the above mentioned topics, were presented during two panels, entitled: “Russian war crimes in eastern Ukraine” and “28 hostages of the Kremlin“.

The first of the presented reports was initiated by Mrs Małgorzata Gosiewska, Member of the Polish Parliament, and presented during the conference by Mr Jan Piekło, Chairman of the Polish-Ukrainian Cooperation Foundation PAUCI. It’s aim was to outline numerous war crimes and crimes against humanity perpetrated by the Russian army and the supportive troops in the eastern part of Ukraine in 2014, and it will constitute the basis for further actions at the International Criminal Court in the Hague.

The presentation of the above mentioned report was complemented by direct testimonies of two victims of tortures, both Ukrainian citizens: Mrs Irina Dogan and a priest Oleksandr Khomchenko. Furthermore, Mr Oleksandr Pavlichenko from the Kharkiv Human Rights Protection Group presented an additional report prepared by a coalition of NGOs “Justice for Peace for Donbas”, entitled: “Surviving Hell: Testimonies of Victims on Places of Illegal Detention in Donbas“. 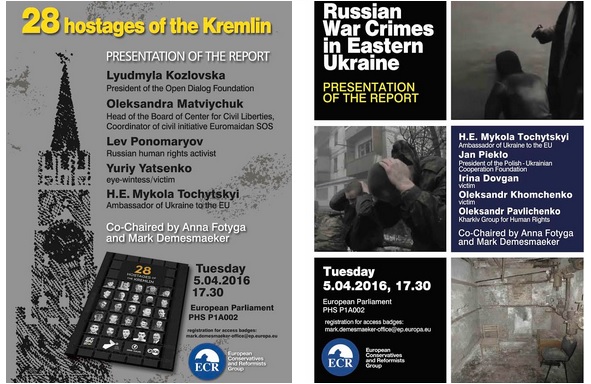 The second panel was devoted to the issue of Ukrainian citizens illegally arrested, detained and judged in Russia. Lyudmyla Kozlovska, the President of the Open Dialog Foundation, presented the report “28 hostages of the Kremlin“. The publication was prepared jointly with the Euromaidan SOS initiative, within the “LetMyPeopleGo” campaign. It details the stories of persecution of 28 social and political activists, as well as regular Ukrainian citizens imprisoned for political reasons in Russia or on the territory of the unlawfully occupied Crimea.

Along with Lev Ponomarev, a well-known Russian human rights activist and Yuri Yatsenko, Ukrainian citizen and one of the released “hostages of the Kremlin”, Lyudmyla Kozlovska discussed on how Russian authorities present the democratic revolution, which took place in Ukraine, as a threat to its own facade democracy. Russia has responded to changes happening in Ukraine with aggression and occupation of parts of its neighbour’s territory. Moscow has also reached for propaganda tools. Court cases opened against Ukrainian activists are part of this war propaganda campaign.

The report “28 hostages of the Kremlin” does not only describe the individual cases but – what’s more important – it clearly indicates characteristics that proof its fabrication and lists the main and most severe human rights abuses of the detained, prosecuted and sentences activists, such as i.a. the right not to be tortured and the right to professional legal aid. Finally, the report includes a set of recommendations, aimed mainly at the international community, on how to help achieve the release of the prisoners.

All participants of the two panels called on the European Union, the EU Member States and the Members of the European Parliament to intensify their efforts to bring about the release of Nadiya Savchenko, whose health conditions are critical, and to improve the conditions of detention and ensure access to medical care and professional legal assistance of all detainees, in particular five most urgent cases of Oleksandr Kostenko, Gennadiy Afanasyev, Mykola Karpyuk, Stanislav Klykh and Yuri Soloshenko.

The newly appointed Ambassador of Ukraine to the European Union, Mr Mykola Tochytskyi, also took part in the conference.