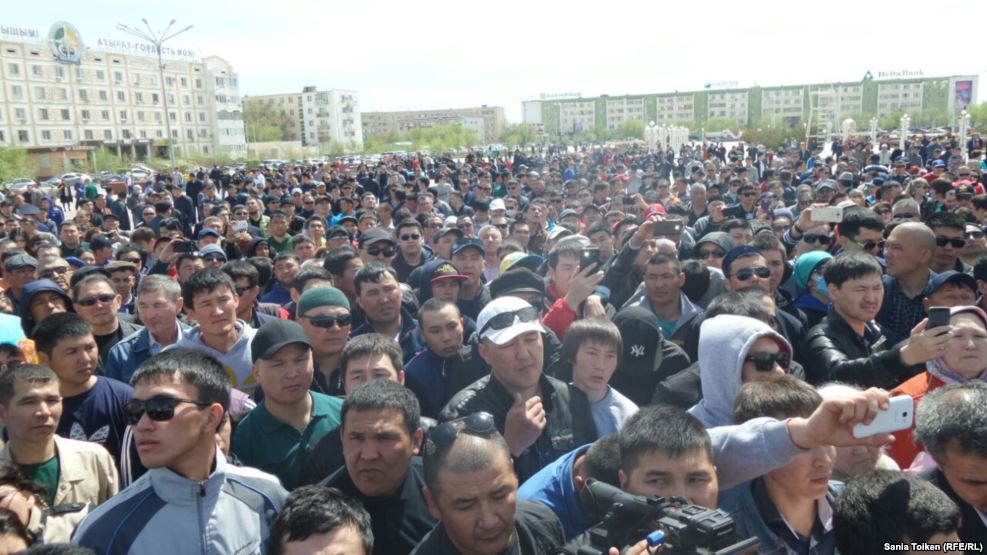 Mass arrests and threats on the eve of rallies of 21th May: We urge to prevent recurrence of Zhanaozen tragedy

The Open Dialog Foundation calls on the international community to urgently react to the wave of arrests of Kazakhstan activists, and make every effort to prevent violence against citizens during peaceful rallies planned for the 21 May, 2016 in several Kazakhstan cities.

At the end of April and at the beginning of May a number of peaceful protests took place in different regions of Kazakhstan (in particular, in Atyrau, Aktobe, Semey). There were several thousand people in each city. The protests were a reaction to the changes to the Land Code, which prolong land lease for foreigners from 10 to 25 years. Kazakhstanis are afraid that these measures will eventually lead China to own their territories.

On the background of mass protests the government has suspended the decision about changes to the Land Code. But activists call on to control the authorities’ decisions and to demonstrate the civic position on a nationwide peaceful rally on the 21 May, 2016. The main factor in the protests is a growing mistrust towards the authorities stuck in massive corruption.

The President openly threatened participants of the protests when he stated that “now it is not time to be liberal“ and that the authorities will take “the most severe actions” in order “not to repeat Ukrainian events”.

To prevent protests, the authorities used hard repressive measures. In period of time from 16 May, 2016 till 20 May, 2016 the authorities arrested more than 30 people for period of 10 to 15 days on charges of “preparation of illegal rallies”. The arrests took place in Almaty, Uralsk, Atyrau, and Astana. In particular, well-known civic activists and civil society leaders Maks Bokayev, Bakhytzhan Toregozhyna, Lukpan Akhmediarov, Makhambet Abzhan were arrested. Criminal cases against several activists have been opened.

The Open Dialog Foundation calls on representatives of the EU, USA and OSCE diplomatic missions to address without delay Kazakh authorities with a requirement to stop mass arrests of civic activists, release the arrested ones, close criminal cases and prevent recurrence of tragic Zhanaozen events. The presence of observers from diplomatic missions on protests may prevent the use of force against peaceful citizens by the authorities.

Here is the list of arrested activists and those who are threatened with arrest by authorities.

Detained for this moment or those who are threatened with arrest: