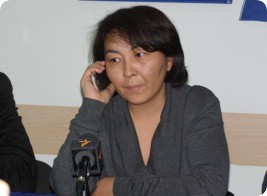 Ayzhangul Amirova, an activist of the opposition movement ‘Khalyk Maidany’ was released from custody where she has remained since the 6th of January, 2012. It also became known that other persons charged with inciting social hatred in the resonant case, namely: Estay Karashaev and Aiman Ungarbaeva, were also released.

Ayzhangul Amirova was released from the detention facility in Zhanaozen on the 20th of June, 2012  – this information was conveyed to the Kazakh mass media by her elder brother Kuanysh Amirov. He did not say anything about the present procedural status of A. Amirova: whether she was transferred to the status of ‘witness’, or whether she signed a pledge not to leave the town etc. It is only known that   A. Amirova signed a gagging writ, and therefore it is unlikely that any journalists will be able to discover any details of her release from her directly.

Despite all the positive aspects of the fact that Ayzhangul Amirova was released from custody, there is reason to believe that the release of the opposition activist was executed due to her transfer from the status of the defendant to the status of witness. This, in turn, means that she is going to testify against other opposition leaders, charged with inciting social discord. A. Amirova is not the only one to be released from custody.

According to the information given by the news portal ‘Respublika’, released earlier were: Estay Karashaev (the head of the Zhanaozen branch of the All-National Social Democratic Party, a former employee of the ‘KazMunaiGaz’) and Ayman Ungarbaeva (a former employee of the ‘KazMunaiGaz’), who took an active part in the strike of oil workers in Zhanaozen in 2011, and were then included in the list of nine defendants charged in the case of inciting social hatred.

Earlier, on the 7th of June, 2012, Vladimir Kozlov told his wife during a visit, that investigators made him an offer to ‘cooperate’, even promising him to be released, if he testifies against Mukhtar Ablyazov. Such proposals from law enforcement agencies were reported by Bolat Atabayev and Zhanbolat Mamay before their arrest. In their case, they were asked to defame Vladimir Kozlov in exchange for the status of witness.

Bearing in mind all the above, we are profoundly concerned by the fact that the prosecuting authorities by the means of pressure still managed to ‘convince’ some of the accused to testify against their comrades. It is likely that the investigative agencies were prompted to take such a step because there is no real base of the indictment in the case of inciting social hatred.