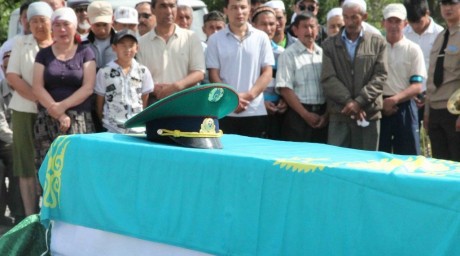 Kazakhstan: the death of border guards on the border post in the Almaty region

7 June 2012 | Editorial office
On the 30th of May, 2012, in the Almaty region of Kazakhstan, 14 border guards from the Arkankergen border post and a local gamekeeper were found dead in burned-out buildings. They were found by workers from the ‘Sarah bukter’ border post.

According to the ‘Express K’ newspaper, from the ‘Sarah Bokter’ border post a group of 15 border workers were sent to the mobile border post ‘Arkan-Kergen’  – 1 officer, 3 contract workers and 11 conscript soldiers. On the 28th of May, the commander of the post, Captain Altynbek Kireev was supposed to establish contact, but at the appointed time did not contact the border post. In order to investigate the incident, on the 30th of May, a task force moved to the mountains. Upon arrival at the place of the border post, burnt buildings, the charred remains of 14 border guards as well as that of the game keeper of the hunting sector were found. One border guard was declared missing.

On the 5th of June, 2012, the Minister of Internal Affairs of Kazakhstan Kalmukhanbet Kasymov reported that one border guard, who survived, and who was considered missing, was detained. He was a 19-year-old conscript soldier Vladislav Chelakh, a resident of the city of Karaganda. The Minister noted a peculiarity – the border guard who was found in one of the winter quarters by the search squads, was dressed in civilian clothes, he was also carrying the commander’s gun. Now the detained border guard appears to be the prime suspect in the murder of 15 people on the border post.

The news that was widely commented upon by society was the information that Vladislav Dlinnov, a broadcaster of the ‘Informburo’ news service, left ‘Channel 31’ after refusing to read the news on the air stating that Chelakh confessed to the murder of his colleagues: “I refuse to lie on the air and spread nonsense about how the border guard worker ‘confessed’ to the murder of his colleagues. Can any of the journalists or news broadcasters read such news on air with a serious face? It’s a shame!”, – Dlinnov wrote on Twitter. At the time that this news was reported, the management of ‘Channel 31’ did not have Vlad Dlinnov’s comments on this issue.

The information on Chelakh’s confession appeared on Wednesday night, citing anonymous sources. On Thursday, the ‘Vremya’ newspaper published an article by journalist Gennady Benditskiy, who described how Chelakh committed the crime, but Benditskiy failed to give any information about his source.

On the 7th of June, 2012, Bagdad Kozhakhmetov, the general director of the ‘Channel 31’ said to the KazTAG Agency in his comment about the dismissal of the journalist Vladislav Dlinnov and his statement: “With regard to the information which our former employee is now spreading on the Internet, we expect him to make a formal denial of his statement because it does not reflect reality. And if he does not deny his statement himself, we will have to make a decision and take action under the laws of the Republic of Kazakhstan”. The Open Dialog Foundation is deeply concerned about the threats made to the TV presenter Vladislav Dlinnov by the former management and will monitor developments in this case.

Such a high-profile event, as well as an information vacuum with regard to the incident, immediately triggered a wave of speculation about what could actually happen on the Kazakh-Chinese border. The opinions vary, but in most cases, very few people believe the official version of the authorities, that border guard workers were allegedly killed by their colleague due to an internal conflict.

According to one theory, which is popular among society, border guard workers could have been killed by bodyguards of a high-ranking gamekeeper who was hunting at that time in the vicinity of the accident. They say that the gamekeeper could have been killed prior to the border guards  who witnessed this, and because of that they were then encouraged to drink until drunk and then killed. One of the border guard workers was spared and threatened that his family members would be killed if he did not take the blame himself. The fact which lends itself to this version is that the border guards were killed in quite a ‘professional’ way – the KazTAG news agency, citing a law enforcement source, reported that 12 out of 14 border guards sustained mortal wounds on the head. In addition, the examination proved that all the deceased border guards had alcohol in their blood.

According to the second version, the tragedy on the border post was made known as early as the 28th of May, 2012. The authorities also knew who was actually involved in the murder of 15 people (the person is supposedly connected with security forces in Kazakhstan and belongs to the general’s ranks). In the course of the investigation, official information was not given because they are thinking of the best way to present the incident.