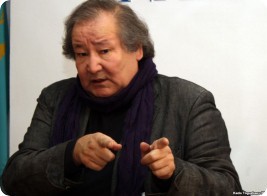 It became known that on the 15th of June, 2012, during the detention, brute physical force was used on the famous theater director Bolat Atabaev.

According to the ‘Respublika’ online newspaper, citing its own sources in law enforcement bodies, on the 15th of June, 2012, during the detention, Bolat Atabaev was beaten by workers of the National Security Committee of the RK. The director still has bruises on his body. According to the ‘Respublika’, an operations officer of the NSC A.M. Nurgaliev was particularly zealous in beating Bolat Atabaev. When B. Atabaev said that he would not leave it just like that, Nurgaliev said to him: “First you need to prove that anything happened!”.

The fact of the use of brute force to Bolat Atabaev was confirmed by his lawyer Gulnar Zhandosova, who met with him on the 26th of June, 2012. According to G. Zhandosova, Bolat Atabaev confirmed that during his detention in Almaty, the NSC workers used brute force on him. “First, his neighbours stated that force was applied to him. Now, since this fact was confirmed, we will lodge a complaint with the Mangistau Regional Prosecutor’s Office and the Prosecutor’s Office of Zhanaozen”, – says G. Zhandosova.

The Open Dialog Foundation hereby expresses its concern for the life and safety of Bolat Atabaev. We demand that the authorities of Kazakhstan comply with the international obligations in the sphere of the protection of rights and freedoms, assumed by the government. The Open Dialog Foundation underlines that Kazakhstan, as a signatory of the International Covenant on Civil and Political Rights (ICCPR), does not observe the provisions of Art. 7 (freedom from torture and ill-treatment) and Art. 10 (the right for humane treatment of persons under arrest or in detention) of the ICCPR.

More on this topic:
Bolat Atabayev