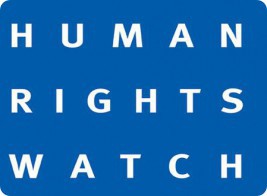 The Kazakhstan authorities should immediately publicly disclose the grounds for bringing new criminal charges against opposition activists and an oil worker active in an extended labor strike in western Kazakhstan in 2011, Human Rights Watch said today.  On June 26, 2012, Kazakhstan’s National Security Committee (KNB) charged the men with “calling for the forcible overthrow of the constitutional order,” which carries a maximum sentence of seven years in prison.

The vague nature of the charges and lack of transparency in the investigation, including a failure to provide any information on what they allegedly did to justify the charges, raise serious concerns that these charges are arbitrary and politically motivated, Human Rights Watch said.

“Bringing additional criminal charges against these activists under the veil of secrecy that has surrounded this investigation reeks of arbitrary action by the authorities,” said Mihra Rittmann, Central Asia researcher at Human Rights Watch. “If any of these people has committed an actual criminal offense, the authorities should say what it was. Otherwise, the charges should be dropped and the activists released immediately.”

The men had been previously charged with “inciting social discord” following bloody clashes on December 16 between police and others in western Kazakhstan after an extended labor strike by oil workers demanding higher wages.

The authorities also brought new charges against Kozlov and two opposition figures in exile with “creating or leading an organized group with the aim of committing one or more crimes,” apparently on grounds that the men comprised a criminal group responsible for the clashes on December 16, Kozlov’s wife, Aliya Turuzbekova, told Human Rights Watch.

The authorities have not made public any information about what it is the activists and Aminov are alleged to have done that would constitute the latest charge. The lawyers representing the men have been forced to sign confidentiality agreements.

In January, the KNB had brought the criminal charges of “inciting social discord,” against Kozlov, Sapargali, Atabaev, and Mamai, all of whom visited western Kazakhstan to support the striking oil workers, as well as Aizhangul Amirova, a member of the Alga! party. Kozlov and Sapargali were detained, while Atabaev and Mamai were released on bail. In February, the KNB similarly charged Aminov and at least five other striking oil workers who participated in the strike in Zhanaozen. According to information received by Human Rights Watch, in June, Amirova and the detained oil workers, except Aminov, were released and the charges against them dropped. The charge carries a maximum sentence of 12 years in prison.

Turuzbekova told Human Rights Watch that her husband also faces a third criminal charge: “creating or leading an organized group with the aim of committing one or more crimes,” and that the authorities have similarly charged Muratbek Ketebaev, a member of the Alga! party coordination committee, and Mukhtar Ablyazov, the former chairman of BTA bank in Kazakhstan and co-founder of the opposition movement Democratic Choice of Kazakhstan, both living in exile. The offense carries a maximum sentence of 10 years in prison and confiscation of property.

On June 15, authorities in Almaty detained Atabaev and Mamai after a court sanctioned their arrest for failing to appear for questioning in Zhanaozen in connection with the ongoing investigation.

Atabaev alleges he was mistreated by KNB officers after his arrest. After meeting with him on June 26, his  lawyer told Radio Azattyk, the Kazakhstan branch of Radio Free Europe/Radio Liberty, that her client alleged that he had been mistreated by KNB officers and that she saw bruises on his body, including around his left eye and arms. Atabaev’s lawyer confirmed to Human Rights Watch that she had seen the bruises and said she had filed a complaint at the Zhanaozen city prosecutor’s office and the Mangistau regional prosecutor’s office.

The prolonged investigation into the December 2011 Zhanaozen violence on “inciting social discord” charges has been characterized by secrecy and a lack of transparency, Human Rights Watch said. The KNB has not released any evidence of specific speech or actions by any of the people who face charges to substantiate them.

The KNB’s non-disclosure statements prevent the activists’ lawyers from sharing any information that constitutes an “investigation secret,” which one opposition activist described to Human Rights Watch as “anything you learn from the investigator.”

“Bringing serious criminal charges against outspoken opposition activists without making public any evidence of wrongdoing raises serious questions about the nature of the investigation,” Rittmann said. “The authorities’ credibility depends on a transparent investigation.”

In addition, the charges brought against the activists and oil worker are vague and overbroad. Human Rights Watch has repeatedly called on the authorities to repeal the offense of “inciting social discord” under article 164 of Kazakhstan’s Criminal Code or amend it to be compatible with human rights law. The offense is so vague and so broad that it can be and has been used to criminalize legitimate behavior protected by human rights law, such as the lawful exercise of freedom of opinion, expression, and association. Human Rights Watch has called for the immediate release of the oil workers and opposition activists facing the charge.

Using this vague charge against activists and oil workers criminalizes behavior that is legitimate under the International Covenant on Civil and Political Rights, which Kazakhstan ratified in 2006, Human Rights Watch said.

“Calling for the forcible overthrow of the constitutional order” is a similarly vague offense that offends the principle of legality which, under international human rights law, requires crimes to be classified and described in precise and unambiguous language so that everyone is aware of what acts and omissions will make them liable and can act in accordance with the law.

The December 16 clashes  in Zhanaozen, a town at the heart of Kazakhstan’s oil industry, was between people who had gathered on the town’s central square, including oil workers who had been conducting a peaceful strike for seven months, and police. Following the unrest, authorities opened a criminal investigation and on March 27, began criminal proceedings against 37 oil workers and others on charges of organizing or participating in mass unrest.

On June 4, 34 of the 37 oil workers and others were found guilty of organizing or participating in mass unrest, despite credible allegations by many of the defendants that they were tortured or ill-treated during the investigation to coerce testimony. Thirteen will serve between four and seven years in prison, and the rest were amnestied, will serve suspended sentences, or were acquitted.