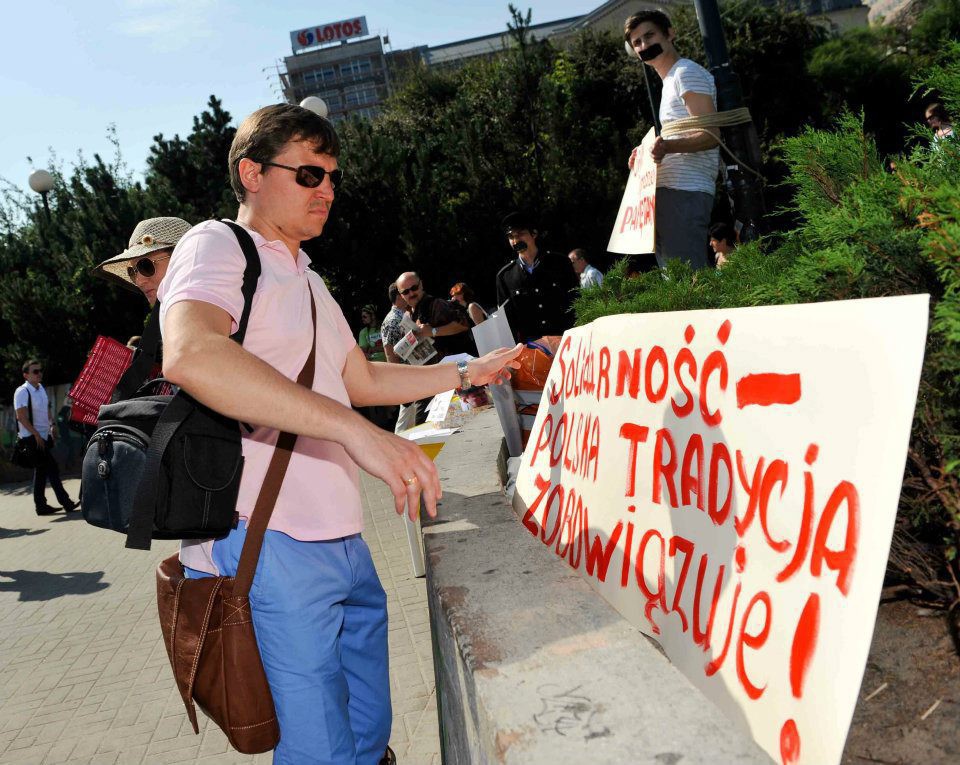 Happening on the birthday of the dictator

On Friday,  6 July 2012 between 8.30a.m. and 11.00a.m. in Warsaw at the Centrum Subway Station, young theatre actors will introduce the Kazakhstan-style democracy to the inhabitants of the capital city.

Contrary to the belief widely shared in Poland, President Lukashenko is not the last dictator of Europe. For many years, Kazakhstan, whose part of the territory which is larger than the Poland is geographically situated in Europe, is received with honors in European salons, actively participating in the international structures. However, even taking over the presidency of the OSCE by this country in 2010 has not contributed to improving the situation of human rights and tolerance of opposition, and the subsequent parliamentary and presidential elections (95.5% result of the current president) in Kazakhstan are considered undemocratic. President Nursultan Nazarbayev, who bears the official title of the Leader of the Nation and who has been ruling the country in this supreme office since 1990 (previously as the First Secretary of the Communist Party of Kazakhstan) will turn 72 this Friday (July 6). In September 2012, Nursultan Nazarbayev’s official visit in Poland is scheduled.

The theatre group from Lublin is preparing for him an unusual gift – a street show in the city center, in which Nazarbayev will be the main protagonist.

What led the group of young people to such a gesture? Well, a few months ago they started working with a theatre director from Kazakhstan, Bolat Atabayev, an activist of the opposition movement “Halyk Maidany”. Their joint project of staging a Polish-Kazakh drama has not been realized because the Kazakh authorities have not released the film director from the country after he gave support to striking oil industry workers in Zhanaozen (in the west of the country). In mid-June, security forces arrested Bolat Atabayev, as well as the leader of the youth organisation “Rukh Pen Til”, Zhanbolat Mamay. In defense of the Kazakh director who has won the Goethe Prize, there stood the German media as well as the Polish MEPs. Thanks to this fact, Bolat Atabayev was released on 3 July from custody.

In an unusual staging, which is going to be seen by pedestrians in Warsaw this Friday, the main actors of political and social scene of Kazakhstan will be symbolically presented:

1. The Naked King (President Nursultan Nazarbayev),
2. The policeman (head of the administration of President Aslan Musin),
3. Freedom of speech (imprisoned independent journalists),
4. The opposition (Vladimir Kozlov, retained on 23 January and is still detained in custody),
5. The oil industry worker (symbolizing the mass protests of workers in Kazakhstan).

The happening aims at drawing attention to the repressions applied by the government in relation to the opposition, independent media and the politically incorrect artists and will end by submitting a symbolic birthday cake at the Embassy of Kazakhstan in Warsaw.

Media representatives and all interested persons are invited to take part in the staging.

Cast:
The King  – the President of Kazakhstan, Nursultan Nazarbayev, the lifetime leader of the Nation.
Police Officer – Head of the President’s Administration, Aslan Musin (who probably gave the order to fire at striking workers in Zhanaozen in December 2011 which resulted in killing at least 16 people).

Victims:
Freedom of speech (symbolizes imprisoned independent journalists)
Vladimir Kozlov (in custody since January this year, the leader of the party “Alga!”, symbolizes the opposition in Kazakhstan)
Oil industry worker (symbolizes the people protesting in Kazakhstan, in particular the oil industry workers in the west of the country; on December 16-18, 2011, as a result of the violent action of the police and security forces 16 – and according to unofficial data – more than 80 people were killed,) .

The setting: Before the entrance to the Centrum subway stations at 8:30 am

The King along with the Policeman appears with their lips sealed and begin to tie three victims to the lighthouse with a thick 10-meter-long rope. The victims symbolizing Freedom of speech, the Opposition and the Protesting Citizens also have their lips sealed.

The King is sitting in front of a large tray, on which the map of Kazakhstan is laid out with a birthday cake on it. In the whipped cream, funeral candles are places with photos of authentic victims of the regime.

Two photographers, also with their lips sealed, take pictures of the king and the cake. They bow to him (the symbol of President’s vanity).

Igor Vinyavsky (editor in chief of the opposition newspaper “Vzglyad”, arrested in January in connection with his active citizenship, especially for explaining the pacification by the police of the protests in Zhanaozen in April and released under the amnesty as a result of the activities of the European Parliament) and Lyudmyla Kozlovska (The Open Dialog Foundation) will encourage pedestrians to release the victims with scissors. Finally, the binding cords are cut.

The message: Thanks to human solidarity of the European community, including the Poles, it is possible to support the civil society in Kazakhstan.

The King, The policeman and the Freed victims take the cake and go to the subway. With changes in the urban transport they reach the gates of the Embassy of Kazakhstan in Poland.

An attempt to hand over the birthday cake for President Nazarbayev to the staff of the Embassy of Kazakhstan, 14, Krolowej Marysieńki Street.