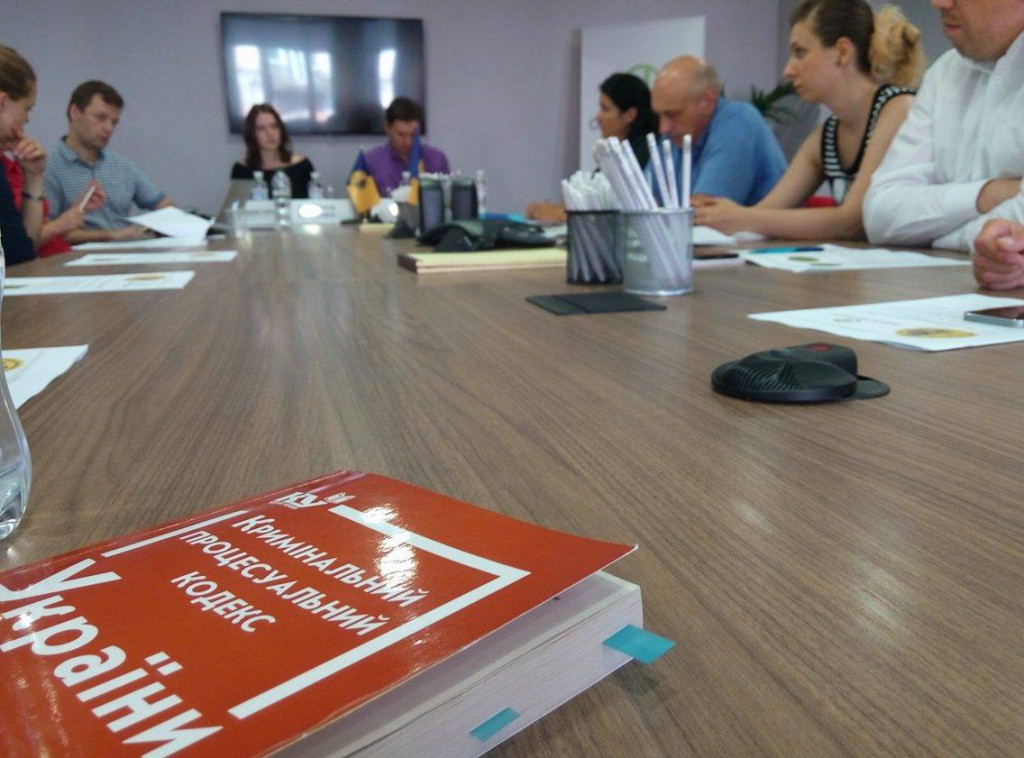 The problem of prolonged detention in Ukraine. Experts discussion

On 28 July, 2016, attorneys and NGO representatives discussed the results of the study, carried out by the Open Dialog Foundation. It was held under the auspices of the Ukrainian Bar Association and was devoted to the issue of ‘The excessive length of detention in Ukraine in breach of reasonable time of criminal proceedings’. The project is being implemented under a grant from the Netherlands Organisation for Scientific Research (NWO).

Roundtable participants included attorneys and representatives of the law firm ‘Alekseev, Boyarchukov and partners’, ‘Sayenko Kharenko’, ‘Ario Capital Group’; members of the Ukrainian Bar Association; representatives of human rights organisations: ‘Kharkiv Human Rights Group’, ‘Human Rights Vector’, ‘Information Centre for Human Rights’; managers and analysts of civil society organisations: ‘The Society for the Protection of the Family and the Individual”, ‘Laboratory for Legislative Initiatives’, ‘Ukrainian Team of Reformers’; a representative of the Ministry of Justice; and the General Prosecutor of the Prosecutor’s Office of Ukraine.

In his speech, analyst of the Open Dialog Foundation, Katerina Savchenko drew the attention of participants to the statistics which do not instill optimism. The number of criminal cases, which are examined by courts for more than 6 months, is increasing. At the same time, almost 1,000 people are held in custody for more than 1 year. In order to illustrate the problem, the analyst cited several examples from 18 cases, examined in the study, in which persons are held or were held in custody for 4 to 7 years, being subjected to torture or psychological pressure.

Organisational flaws in the work of courts that bring about the violation of reasonable time spans (long breaks, absence of people involved in the case, failure to transport defendants from prison to court, overloading of judges, a lack of the jury etc.), were named. ”But these are merely technical factors. Still, the key factors are both accusatory bias in the work of judges and prosecutors’ unofficial duty to bring about a guilty sentence by all means. It is indicative that prosecutors withdraw from pressing charges in less than 1% of cases, and the share of acquittals is 0.32%”, – Katerina Savchenko emphasised.

The subject was elaborated in more detail by an attorney and a member of the Ukrainian Bar Association, Sergiy Kischenko who referred to his own practice. He stressed that courts do not always adhere to the principle of competition when considering the prosecutors’ motions to detain or extend detention of a person. Also it is common practice that prosecutors not only appeal acquittals but also initiate criminal proceedings against judges for handing down such judgments. According to the attorney, it promotes accusatory bias in the work of courts.

Also, Sergiy Kischenko reported that one of the study’s recommendations is the introduction of a provision in CCP which would prohibits heads of local prosecutor’s offices from initiating disciplinary actoons for the use of the right to refuse to remit the case to court or withdraw from pressing charges (in the absence of the proof of guilt).

On the other hand, Prosecutor of the General Prosecutor’s Office of Ukraine, Valentina Konnova noted that the support of the public prosecution is the main function of a prosecutor, and, therefore, the withdrawal of charges would place into question the existence of the institute of the prosecutor’s office. This, in turn, creates the possibility of imposing disciplinary sanctions for handing down such decisions. At the same time, Konnova stressed that the procedural independence of a prosecutor is guaranteed. In addition, the prosecutor stated that the defendant’s conduct could also result in delaying the proceedings; as regards the failure to transport the accused from prison to court, frequently the reason is simple: a lack of fuel.

Deputy Director of the ‘Kharkiv Human Rights Group’ Oleksandr Pavlichenko stressed the fact that Ukraine has not fulfilled many of the EctHR’s judgments regarding violations of the right to reasonable time of a court trial.

Attorneys who were present at the event, stressed that an important issue is how to convey to the public bodies, the recommendations of the study, and implement them. Miroslav Lavrinok, First Deputy Director of the Coordination Centre for Legal Aid of the Ministry of Justice, gave a proposal to issue specific recommendations in the form of draft amendments to the legislation. Project Coordinator Jędrzej Czerep shared the successful experience in advocacy of reform, obtained by the Open Dialog Foundation (in particular, promotion of the reform of INTERPOL). According to him, this experience can help in the struggle for the implementation of recommendations to address the prolonged detention in Ukraine.

The representative of the Open Dialog Foundation, Agnieszka Piasecka, told those present at the event about her participation in projects regarding the reform of the judiciary in Ukraine, stressing the fact of the closedness of the prosecutor’s offices and a lack of political will to reform them.

Taking into account the comments and suggestions of participants in the event, the authors will introduce appropriate amendments in the study, and in August 2016, they will present the final report to the public.