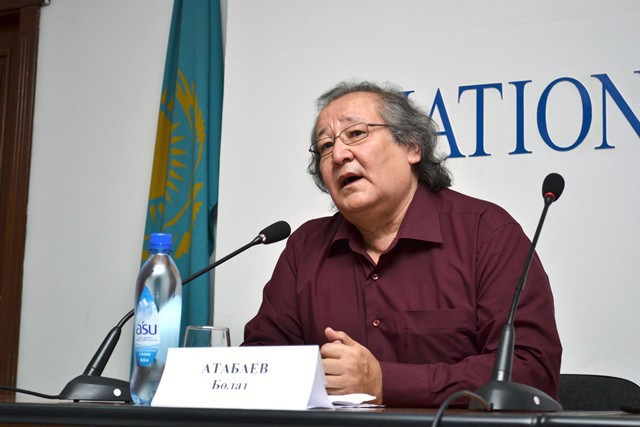 The Open Dialogue Foundation welcomes the release of Bolat Atabayev

The well-known Theatre Director, Bolat Atabayev has eventually been released from detention. Attempts undertaken by investigators to persuade him to testify falsely against Vladimir Kozlov turned out to be futile. Meanwhile, the 24-year-old Kazakh journalist Zhanbolat Mamay, accused of inciting social discord, remains in custody in the city of Aktau.

On the 3rd of July, 2012, at 10.00 p.m., Bolat Atabayev was released from the detention facility of the city of Aktau. He has remained in custody since the 15th of June, 2012. The director was reclassified from the status of “defendant” to “witness”, and he was bound to secrecy regarding the course of the investigation. Bolat Atabayev was released under Article 65 of the Criminal Code (“exemption from prosecution in connection with active confession”), but he did not sign a false testimony against Vladimir Kozlov, as the investigating authorities required, “All that concerned Kozlov, was removed from the statement. Also, the part that I called everyone to disassociate from the Nur Otan party, to destroy their party cards and to engage in the “Khalyk Maidany”, was deleted” — said Bolat Atabayev during the press conference.

Bolat Atabayev considers that the main reason for his release was the lack of evidence base by investigative organs. He is of the same opinion regarding the other remaining defendants  being held on charges of inciting social discord: “I know they have nothing against Kozlov and against Sapargali, so they (the investigating authorities – Ed.) do not know what to do“.

Information about the impending release of Bolat Atabayev and Zhanbolat Mamay was spread in the media of Kazakhstan as early as on the 29th of June, 2012. Despite the expectations of the Kazakh and the world community, the theatre director and the young journalist were not released on the same day. Soon afterwards it was reported that Bolat Atabayev and Zhanbolat Mamay were not released due to their refusal to testify against the leader of the opposition party “Alga!” Vladimir Kozlov.

Bolat Atabayev was finally released only on the 3rd of July, 2012. However, his friend and companion, Zhanbolat Mamay, still remains in the detention facility in the city of Aktau.

There is reason to believe that the Bolat Atabayev’s liberation depends more on the political issues than legal ones. The “delay” in releasing Atabayev and the subsequent “bargaining” with him regarding his giving  evidence against Kozlov is one of the visible signs of large-scale intra-wars taking place in Kazakhstan. First of all, it seems like the NSC is trying to save its reputation and influence. The absurdity of the criminal case brought, in fact, for political reasons against the democratic opposition, in the absence of real evidence, will strike the highest echelons of the NSC. Atabayev’s arrest has caused a huge wave of criticism from civil society in Europe, especially from Germany where Atebayev is now undergoing medical treatment. Astana could not keep quiet – someone had to be held liable for the arrest of the famous director. It seems that the National Security Committee leadership is well aware of this, and thus, is making attempts to gently step back and to avoid  the role of “scapegoat”. Atabayev’s release seems to trigger a sense of “déjà vu”, evoking the circumstances surrounding the release of the editor of the “Vzglyad” newspaper, when in order to remove international pressure on Kazakhstan, Igor Vinyavskiy was released from prison, despite his investigator receiving no notification of the fact…

The solidarity of international non-governmental organisations, such as “Human Rights Watch”, “Reporters Without Borders”, “Amnesty International”, “LabourStart”, which called on the Kazakh authorities to stop political persecution, played an important role in the release. In their statement, “Human Rights Watch” appealed to the authorities of Kazakhstan with a demand to immediately release opposition activists and oil workers who took an active part in the long strike in western Kazakhstan in 2011, or to disclose the grounds for introducing new criminal charges against them. “Bringing additional criminal charges against these activists in a secret investigation immediately brings to mind the arbitrariness of the authorities”, – the statement reads. After Bolat Atabayev’s release, the human rights association “Reporters Without Borders” condemned their continued incarceration of the journalist of the “Zhas Alash” newspaper Zhanbolat Mamay.

The Open Dialogue Foundation welcomes the release of Bolat Atabayev. We urge the authorities of Kazakhstan to stop politically motivated prosecutions, and to release other defendants accussed of inciting social discord in Zhanaozen in 2011 – Vladimir Kozlov, Serik Sapargali, Zhanbolat Mamay, Akzhanat Aminov. The Open Dialogue Foundation fully agrees with the conclusion of “Human Rights Watch” that the criminal action against the political activists in Kazakhstan should be discontinued if the prosecution has no solid evidence. We also appeal to the international community to continue to demand that the Kazakh authorities release all political prisoners being held in the country.