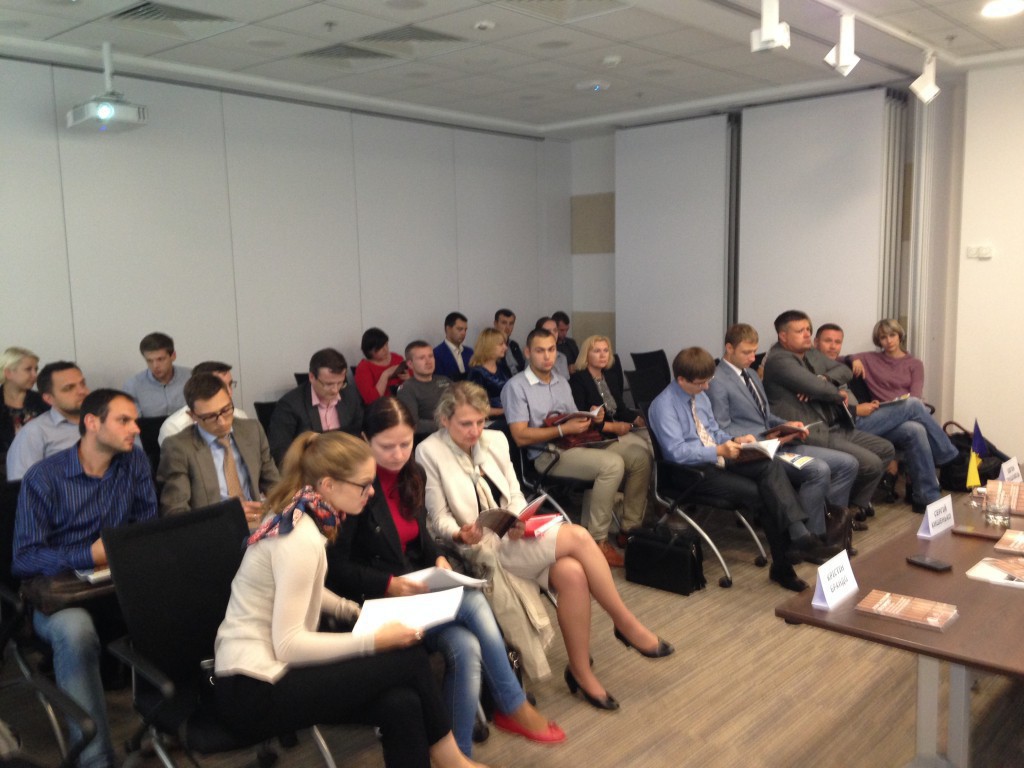 On 18 August, 2016, the Open Dialog Foundation and the Ukrainian Bar Association presented the final results of the study entitled “Years behind bars without judgment: prolonged pre-trial detention in Ukraine due to a violation of reasonable terms of criminal proceedings”. The report was prepared taking into account comments of attorneys, NGOs and government officials who had previously participated in the discussion of previous results of the study.

The event of the presentation of the report was attended by 40 people. Among them were representatives of the Embassies of Belgium, Norway and Poland; one representative from each of the following agencies: the Ministry of Justice, General Prosecutor’s Office, Institute of Economics and Legal Studies, Freie Universität Berlin; members of the Ukrainian Bar Association, in particular, members of the bar associations: ‘Ario’, ‘Sokolovskyi and Partners’, ‘Solodko and Partners’, ‘Alekseyev, Boyarchukov and Partners’, ‘Sklyarenko, Sidorenko and Partners’, ‘Invicta’, BDO, Arzinger, Averlex, Smartsolutions and Status; as well as lawyers working in state and private companies.

Analyst of the Open Dialog Foundation and one of the authors of the study, Katerina Savchenko drew the audience’s attention to the fact that in 2014, in Ukraine, 4,500 criminal proceedings were examined by courts within a period of six months to one year, and 3,030 proceedings were examined for more than one year. Over the past two years, the number of cases that have not been examined by local courts over a period of six months, has increased (in 2015, there were 10,037 cases of this kind).

“Those who are held in custody, suffer the most in this situation. As of 1 April, 2016, 538 people were held in custody for one to two years, and 420 people – for more than two years”, – Katerina Savchenko noted. In particular, the report of the Open Dialog Foundation and the Ukrainian Bar Association describes the cases of persons who were held in detention facilities for several years or are still being held in custody (in some cases – for 8 to 10 years); at the same time, serious violations by the investigative bodies have been recorded in these cases.

Katerina Savchenko stressed that the percentage of acquittals in Ukraine is 0.32%, and prosecutors drop charges in less than 1% of cases. These data illustrate the problems of accusatory bias in the work of judges, and prosecutors’ unofficial obligation to pursue a guilty verdict by all means.

Counsel Serhiy Kischenko confirmed that the problem of violation of reasonable terms of criminal proceedings largely lies in the work of prosecutors and courts. He stressed that, if a person is held in custody for several years, it must mean that there is no material evidence in the proceedings, or there are other defects in the case. Serhiy Kischenko gave an example from his legal practice: once, one of the prosecutors openly said that he ‘cannot’ drop the charges and he would rather move to work in a different department and pass the case to a different prosecutor. “On the one hand, prosecutors seek a guilty verdict by all means; on the other hand, prosecutors completely ignore the investigations into torture and other violations by the law enforcement agencies”– Serhiy Kischenko enunciated.

In addition, Serhiy Kischenko raised the problem of violation of the principle of adversarial by courts. Sometimes, judges themselves summon witnesses or cross-examine them, although it is the duty of a prosecutor. For judges, producing an acquittal requires much more effort than writing a guilty verdict. As noted by Kischenko, one of the factors of pressure on judges is opening by prosecutors of criminal proceedings against judges for the handing down of ‘inconvenient’ (acquitting) judgements.

Yevheniy Solodko, the chairman of the UBA Committee on Criminal and Criminal Procedural Law, noted the failure of the reform of the justice system in Ukraine and sabotaging the reform on the part of the prosecutor’s office. He noted that the statements by heads of law enforcement bodies regarding the ‘readiness’ for the reform are merely empty declarations. According to Solodko, the situation significantly exacerbates the struggle for human rights observance in Ukraine.

According to Solodko, ordinary citizens who have become victims of the system, find themselves in a hopeless situation. The counsel stressed that many prosecutors lack professionalism. Law enforcement agencies do not want to determine an unbiased picture, but, instead, they coerce suspects and defendants to ‘make a deal with the investigative bodies’.

In addition, Aleksandr Orlov, a citizen of Poland, who was held in the Odessa detention facility for 4.5 years, held a Skype conference with participants of the meeting. His case received publicity among Polish MPs and diplomats, after which, in May 2016, Orlov was released on the guarantee from MPs. Orlov spoke about the intentional delays in the proceedings, in which more than 150 court hearings were held, and about the failure of investigations into his allegations of torture by the law enforcement authorities.

Yevhen Grushovets, who was one of Aleksandr Orlov’s attorneys, confirmed that the court has repeatedly rejected the requests to change the preventive measure to such which would be unrelated to detention, citing that there are ‘no grounds’ to issue such a decision. Yevhen Grushovets stressed that the low quality of the materials of the criminal proceedings didn’t give grounds for Orlov’s remand in custody. “For 4.5 years, the man was held in custody just because neither the prosecutor nor the court were willing to objectively assess the nature of the case or the case file. It is extremely difficult to stop this train which is rushing at full steam only towards the prosecution’s line”– Yevhen Grushovets noted. In addition, he outlined the important issue of impunity of law enforcement officials whose actions cause delays in the examination of criminal proceedings.

The attorneys, who were present at the event, expressed their interest in the results of the study, and cited numerous examples from their own practice, naming their clients who were held in custody for several years. The participants of the event stressed the need for further work in the field of promotion and implementation of the recommendations regarding the right to reasonable terms of criminal proceedings.