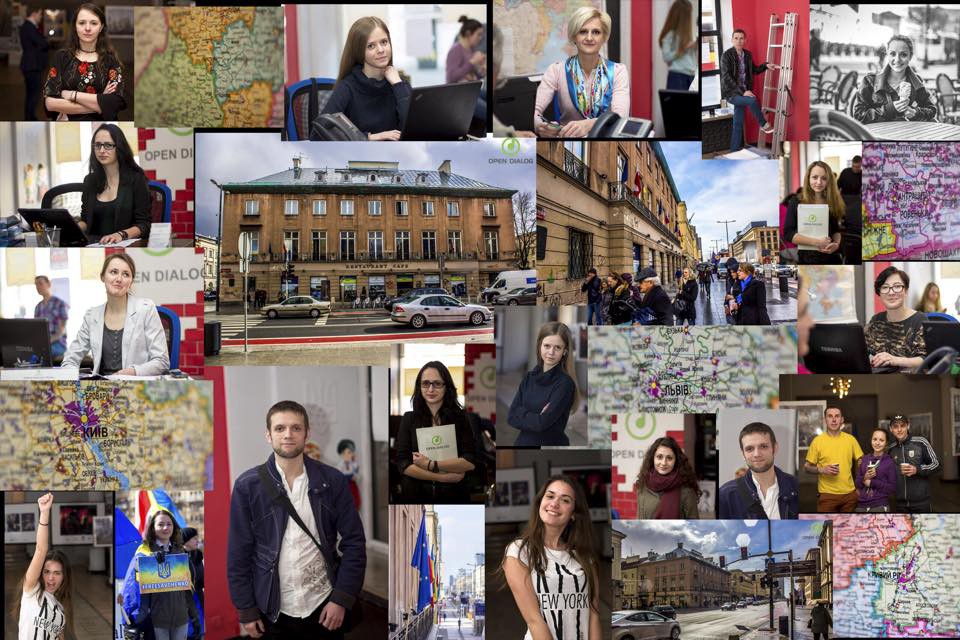 The “Ukrainian World”, located in a historic building at Nowy Świat 63 in Warsaw, was promoting Ukrainian culture, hosting projects aimed at helping migrants integrate with Polish society, and debates dedicated to Ukraine and eastern countries, focused on social and political topics. The centre was visited by renowned Ukrainian and Polish intellectuals, journalists, civic activists and politicians. It organised movie screenings, exhibitions of paintings and caricatures, and it hosted the first Museum of Maidan in the world and a Ukrainian library. The Ukrainian Experimental Theatre group practised there and the centre welcomed a number of other activities: classes in combat hopak, meetings of Cossack fraternity group, exercise sessions of vocal signers’ groups, and sports events screenings.

Furthermore, the Open Dialog Foundation ensured the centre offered broad support to immigrants: free-of-charge psychological assistance (particularly important in cases of individuals showing symptoms of post-traumatic stress disorder, resulting from the events on Maidan and the war with Russia), language classes in Polish, Ukrainian, English and German, as well as counselling on legalising the stay in Poland, obtaining the status of a refugee or other forms of protection on the territory of Poland, looking for a job or starting a job in Poland, as well as finding housing and schools for children. Legal advice was also available thanks to lawyers periodically on call in the centre. The “Ukrainian World” team members supported centres for refugees and the Office for Foreigners as interpreters or cultural mediators. They also conducted workshops for border guards.

The “Ukrainian World” was featured in a number of publications in international media, covering the issue of Poland’s approach to immigrants, and was an outstanding and positive example of collaboration between authorities and non-governmental organisations in the area of addressing and solving issues related to migration.

In 2015, the centre hosted daily concerts of Chopin music, open to public: both residents of Warsaw and tourists, organised together with the Smolna Association.

The centre had become an important point of distribution of humanitarian aid – both to those in need in Poland, as well as soldiers and internally displaced persons in Ukraine. It was the departure point of the famous transports of helmets and bulletproof vests for members of the Ukrainian volunteer battalions. In 2014, the Open Dialog Foundation and EuroMaidan-Warsaw delivered the aid in various forms of a total value of over 1 million PLN. Collections in support of Ukraine were also regularly organised in the “Ukrainian World”.

The activity of the centre wouldn’t have been possible without the support of the Warsaw’s local authorities or the hundreds of volunteers – Poles interested in Ukraine, as well as Ukrainians living in Poland.

– It is our duty to thank the authorities of the city of Warsaw, and of the Śródmieście district, as well as our partners and volunteers. Without them, the “Ukrainian World” could have never functioned and become such a necessary and recognisable place on the map of the capital. We followed the idea of an open place – that is why we had invited our friends from EuroMaidan-Warsaw to work with us, and why we supported initiatives of other organisations, i.a. the Ternopil Foundation, the Group of Friends of Ukraine or the Embassy of Ukraine in Poland, as well as countless other Ukrainian initiatives and organisations. We have also organised a joint academic conference with the University of Warsaw. We were all part of this place, creating it together – says Bartosz Kramek, Head of the Board of the Open Dialog Foundation.

– The number of Ukrainians arriving to Poland keeps growing, which means that the integration needs are enormous. That is why we don’t want to definitively stop the activity – we plan to suspend it until we find a new place, with a clear situation with regards to ownership, and – most of all – allowing for the further functioning of the centre and its financing. We’re planning on opening it again in the future in an even more ambitious formula – adds the representative of the Open Dialog. According to our information, the current location is an object of a court dispute between the authorities of the city and the heirs of its pre-war owners.