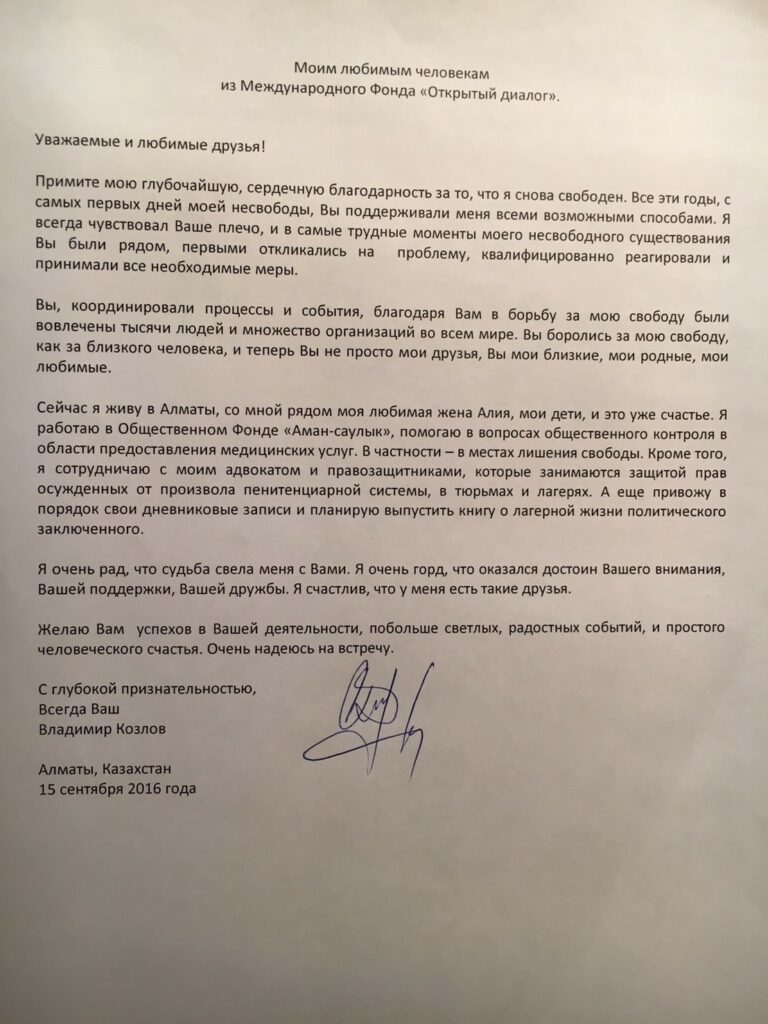 Vladimir Kozlov, Kazakh dissident, released from prison last month, after almost five years spent behind bars, wrote a letter to the Open Dialog Foundation. In the letter, he calls ODF activists his friends and thanks them for their dedication in fighting for his freedom.

Kozlov underlines that the Foundation has been supporting him from the very beginning, i.e. when the regime of president Nursultan Nazarbayev placed him in a penal colony for his activity in the opposition to the current authorities. He adds that ODF members were the first to react to problems he faced when in a Kazakh prison. “You fought for my freedom as you fight for the freedom of a close person, and now you’re not only friends to me, you’re my family” – writes the opposition activist.

Today, Vladimir Kozlov is active in fighting for prisoners’ rights in Kazakhstan, working closely with lawyers and non governmental organisations. He has also shared he plans for the nearest future – he is planning on writing a book about the prison reality of the activists persecuted by the Nazarbayev regime.

The Warsaw based Open Dialog Foundation organised an international campaign, calling for the release of the Kazakh political prisoner. Thanks to its work, over the last 4 years numerous observation missions and visits of the EU politicians took place in Kazakhstan. The Foundation intervened on the level of European institutions, presenting analyses and reports about human rights violations in Kazakhstan, it initiated a series of appeals that European politicians addressed to the Kazakh authorities, calling for the release of Kozlov, and to the authorities of the prisons, in which he was being held, to call for the respect of his rights.

Translation of the letter:

To my beloved persons from the International Open Dialog Foundation

Please, let me deeply thank you from the bottom of my heart for the fact that I am again free. For all those years, from the first day of imprisonment, you supported me in all possible ways. I have always felt your support, and you have always been there, next to me in the most difficult moments of my slavish existence. You were the first to address the problems, reacting professionally and by doing all that was in Your power to help.

You coordinated processes and events. Thanks to you, thousands of people and numerous organisations worldwide got involved in the fight for my freedom. You fought for my freedom as you fight for the freedom of a close person, and now you’re not only friends to me, you’re my family.

I live in Almaty, now, next to my beloved wife Aliya – this already is happiness. I work in the Amansaulyk Foundation, I am active in the field of the civic control over the medical services provided to the citizens. In particular – in places of detention. Apart from that, I work together with lawyers and human rights defenders who dedicate their career to defending convicts from the abuses of the penitentiary system in prisons and colonies. I put notes from my diary in order and I plan on issuing a book about the life of a political prisoner.

I am very happy that the faith has put us in touch. I am proud to have been worthy of Your attention, Your support, Your friendship. I am happy to have such friends.

I wish you success in your activities, more positive and joyous events, as well as plain human happiness. I really hope to see you.

With deep regards,
Yours
Vladimir Kozlov