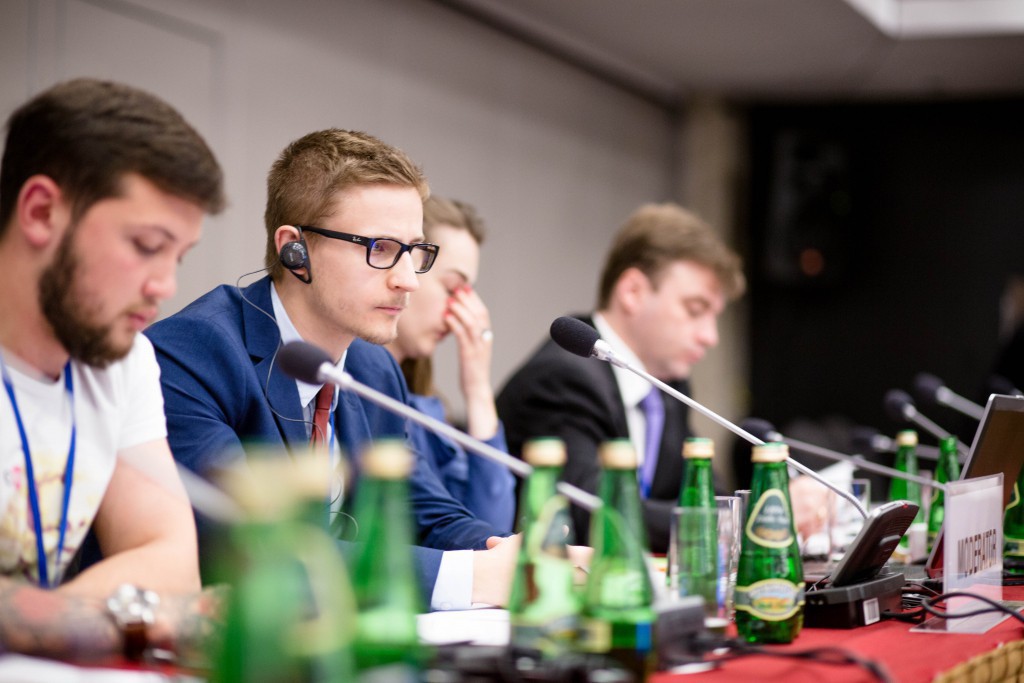 On Friday 23 September, 2016, the Open Dialog Foundation and the Center for Civil Liberties organized an OSCE ODIHR Human Dimension Implementation Meeting side-event on Ukrainian political prisoners in the Russian Federation and the illegally occupied Crimea, as well as Russian citizens persecuted by the national authorities due to their opposition to the ongoing Russian-Ukrainian military conflict. The side-event was organized within the “Let My People Go” international advocacy campaign calling for the release of the so-called ‘hostages of the Kremlin’, and conducted jointly by numerous human rights organizations from Ukraine and the European Union member states.

With a view to publicly justify the illegal annexation of Crimea and the participation of the Russian army in the military conflict in the Donbas, the Russian authorities resorted to powerful state propaganda, designed to portray Ukraine and its citizens as the embodiment of an external enemy. One of the support mechanisms for this image was the initiation of a number of trumped-up criminal cases against Ukrainian citizens who were accused of such serious crimes as ‘genocide’, ‘mass murder’, ‘terrorism’ and ‘espionage’. At least 45 innocent people have become victims of criminal prosecution and either by chance, or due to the actions of the Russian security services, have found themselves in the hands of national law enforcement agencies on the territory of the Russian Federation or the illegally occupied Crimea. 32 of these people are still held in detention facilities or prisons (15 have been sentenced to imprisonment: the ‘Chechen’ case of Mykola Karpyuk and Stanislav Klykh; the ‘Crimean Terrorists’ case of Oleg Sentsov, Oleksandr Kolchenko and Oleksiy Chyrniy; the ‘Spies’ cases of Valentyn Vyhivskyi and Viktor Shur; the ‘Hizb ut-Tahrir’ case of Ruslan Zeytullayev, Nuri (Yuriy) Primov, Rustem Vaitov and Ferat Sayfullayev; the cases of Oleksandr Kostenko, Hayser Dzhemilev, Serhiy Lytvynov and Andriy Kolomiyets / 15 have been facing criminal proceedings: the ’26 February’ case of Akhtem Chiyhoz, Mustafa Dehermendzhi and Ali Asanov; the ‘Hizb ut-Tahrir’ case of Emir-Usein Kuku, Enver Bekirov, Muslim Aliyev, Vadim Siruk, Arsen Dzhepparov, Refat Alimov, Zevri Abseitov, Remzi Memetov, Rustem Abiltarov and Enver Mamutov; the ‘Ukrainian Saboteurs’ case of Enheniy Panov, Andrey Zakhtey and Redvan Suleymanov; the case of Artur Panov / 2 received suspended sentences: the ’26 February’ case: Talyat Yunusov and Eskender Nebiyev / 5 have been facing criminal proceedings with the selected restraint measure not connected with detention: the ’26 February’ case of Arsen Yunusov, Eskender Kantemirov and Eskender Emirvaliyev; the cases of Ilmi Umerov and Mykola Semena).

A wave of politically motivated persecution has particularly swept the illegally annexed territory of Crimea. The purpose of it was to spread an atmosphere of fear across Crimea, and thus prevent any public actions being made against the Russian occupying powers. The methods employed by the special services and law enforcement agencies (kidnapping and enforced disappearances, torture and ill-treatment, psychological abuse, intimidation, denial of legal and diplomatic protection, denial of health treatment, conducting unfair trials on trumped-up charges, etc.), cites the Russian Federation as a power that uses terroristic methods against civilians (as inter alia in the case of the ‘Crimean Terrorists’). Particularly difficult remains the situation of the most socially active Crimean Tatars who, under the guise of fighting terrorism, are pursued by the Russian Federation and its propaganda as an ‘ethnic and/or religious minority’ (while being in reality the indigenous people of Crimea), prone to extremism (see inter alia the cases of ‘26 February’ and ‘Hizb ut-Tahrir’)

Moreover, additionally to a number of citizens of Ukraine who face politically motivated criminal prosecution in the Russian Federation and the illegally occupied Crimea, there is a still unknown number of Russian citizens who have been protesting against the Russian initiation of and direct involvement in the ongoing Russian-Ukrainian military conflict, and therefore have been persecuted by the authorities in the country.

The “Let My People Go” advocacy campaign calls to:

– demand that the Russian authorities release the Ukrainian citizens subjected to politically motivated, unlawful criminal prosecution in the Russian Federation and the illegally occupied Crimea; without meeting this requirement, the Minsk Agreements cannot be considered to have been fulfilled, and the regime of sanctions, imposed on the Russian Federation by the democratic states should remain in force;

– demand that the Russian authorities provide information about the details of the criminal prosecution, the state of health and the conditions of detention in prisons of these Ukrainian citizens, particularly Mykola Karpyuk, Stanislav Klykh and Mykola Semena;

– demand that the Russian authorities permit international institutions and bodies of the UN, OSCE and/or the CoE to enter the country and Crimea for the purpose of monitoring the observance of the fundamental rights of these Ukrainian citizens, such as the right to life, freedom from torture and the right to a fair trial; such missions should take place with broad participation of and monitoring by international human rights organisations;

– render political, legal, financial and informational support to these Ukrainian citizens and their families directly and through the “Let My People Go” international advocacy campaign;

– organize international observation of trials of these Ukrainian citizens;

– not recognize the parliamentary elections to, and the legitimacy of, the State Duma of the Russian Federation, due to their organization on the territory of illegally occupied Crimea on 18 September, 2016, as well as to introduce personal sanctions against those involved in their organization and prohibition of the Mejlis of the Crimean Tatar people;

– introduce personal sanctions against those involved in the politically motivated, illegal criminal prosecution of these Ukrainian citizens, including the “Savchenko” list prepared by the Open Dialog Foundation and adopted by the Parliament of Ukraine, as well as the “Chyihoz” list prepared by the Crimean Tatar Resource Center.