Justice prevails – right after Bolat Atabayev was released from arrest, a 24-year-old journalist Zhanbolat Mamay also regained his freedom. Thanks to the activity of the international and Kazakh public, a list of defendants in the high-profile case on “incitement to social hatred” is gradually being reduced. 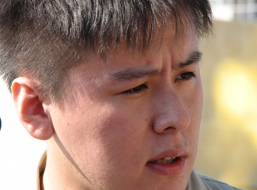 Zhanbolat Mamay was released from the detention facility in Aktau late at night on the 12th of July, 2012. He had been under arrest since the 15th of June, 2012 on charges of ‘involvement in fomenting social discord’ in Zhanaozen in 2011.

The day after his release, a press conference with the participation of Zhanbolat Mamay and the leader of the national committee “Arasha” Tolegen Zhukeyev was held in the National Press Club of Kazakhstan. According to the young journalist, he was transferred from the category of accused to the category of the witness pursuant to Article 65, part 2 of the Criminal Code. In his penitential statement he wrote that he does not negate the fact that he went to Zhanaozen and gave speeches  to the striking oil workers, and repented for the Zhanaozen bloodshed (Bolat Atabayev’s penitential statement contained a similar wording). Zhanbolat Mamay admitted that one of his major achievements is that he did not give evidence against anyone.

Just like in Bolat Atabayev’s case, Zhanbolat Mamay’s stay in detention caused a wave of outrage among the international and Kazakh public. In particular, the international organisation ‘Reporters Without Borders’  and the Federation of Italian Journalists (FNSI) issued statements in defence of the 24-year old journalist. Also, a social activist Tolegen Zhukeyev pleaded for the release of Zhanbolat Mamay. “I went to Astana, I met with rather influential people and tried to convince them that there are no good reasons to remand in custody and try Bolat Atabayev or Zhanbolat Mamay” – said Tolegen Zhukeyev at a press conference.

Thus, upon release of Bolat Atabayev and Zhanbolat Mamay, still three more opposition leaders, who are accused on charges of inciting social hatred and calling for the overthrow of the constitutional system, remain in custody:

They are all charged under three articles of the Criminal Code – Art. 164 (“incitement of social hatred”) Art. 170 (“calling for the overthrow of the constitutional system”) as well as Article 235 (“the establishment and management of an organised group with a view to committing one or more crimes, as well as participation in it”). Zhanbolat Mamay expects that the trial of the Kazakh oppositionists will start in August 2011.