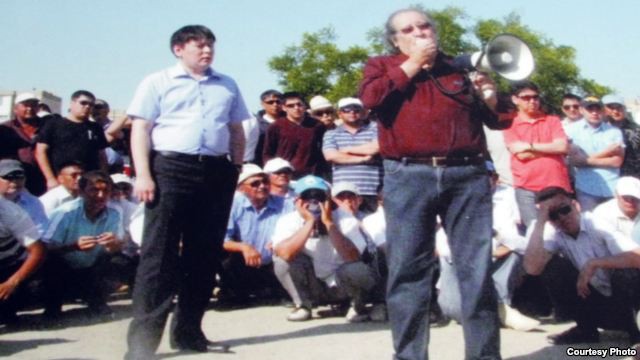 On the 29th of June, 2012 The Kazakh media has been full of reports about the upcoming release from custody of a well-known Theatre Director Bolat Atabayev and the leader of the youth movement “Rukh Pen Til” Zhanbolat Mamay. Three days later, they are still under arrest. According to the lawyers, the release of Bolat Atabayev and Zhanbolat Mamay depends solely on their willingness to testify against members of the civic opposition.

On Friday, the 29th of June, 2012, according to lawyers, Kazakh media reported information about the imminent release from detention of Bolat Atabayev and Zhanbolat Mamay, who had been held since the 15th of June, 2012. The decision to change their status (from the category of defendants to witnesses) was initiated by the head of the operational investigation group of the NSC, Colonel Nurlan Baldairov. The release of Bolat Atabayev and Zhanbolat Mamay was expected to be executed under Article 65 of the Criminal Code of the RK (“Exemption from criminal liability in connection with an active confession”). According to this article, the accused may be exonerated  of criminal liability in exchange for cooperation with the investigative authorities. Taking into account the fact that Bolat Atabayev and Zhanbolat Mamay still remain under arrest, it can be stated with some certainty that they have not decided to cooperate with the investigative bodies.

According to Abzal Kuspan, Zhanbolat Mamay’s lawyer, the investigative authorities offered his client a “sort of a deal”. The condition of Zhanbolat Mamay’s release is his consent to give the “necessary evidence” against Vladimir Kozlov and Serik Sapargali: “They suggested that they (B.Atabayev and Zh. Mamay) give evidence against Sapargali and against Kozlov. But they  have refused to do so. Now, as it seems, they are “bargaining”.

The question of the release of Bolat Atabayev and Zhanbolat Mamay is still an unanswered one. However, no matter how the situation evolves, one thing can be stated with confidence – the investigative authorities have no solid evidence against Bolat Atabayev and Zhanbolat Mamay, or against other the arrested suspects – representatives of the civil society. The sole purpose of their detention is to break morale amongst the activists and compel them to testify against their fellow activists, especially against the leader of the “Alga!” opposition party, Vladimir Kozlov.

Let us recall that Bolat Atabayev, Zhanbolat Mamay, Vladimir Kozlov and Serik Sapargali are charged with “inciting social discord” in Zhanaozen in 2011. It was previously reported that  other defendants in the high-profile case: an activist of the opposition movement “Khalyk Maidany” and former workers of the “KazMunayGas” Estay Karashaev and Ayman Ungarbaeva were released from detention.  It appears that the prosecuting authorities by the means of pressure managed to “convince” some of the accused to testify against their fellow activists.

It should be noted that the Kazakh authorities do not miss the slightest opportunity to defeat their greatest enemies. First of all, we mean Mukhtar Ablyazov and Muratbek Ketebayev. According to Aliya Turusbekova, the wife of Vladimir Kozlov, the NSC has included them in the group of defendants in the case of “inciting social discord”. As contrived by the investigative authorities, the main responsibility should lie on Vladimir Kozlov, Muratbek Ketebayev and Mukhtar Ablyazov, whom the authorities want to present as an organised criminal group.

Muratbek Ketebayev – the head of the “Civic Activity” Foundation, an expert on the events which were taking place in Zhanaozen in 2011. He actively supported the dialogue between striking oil workers and the management.

Mukhtar Ablyazov – one of the most prominent opposition politicians in Kazakhstan, Nursultan Nazarbayev’s personal enemy. He was sentenced to six years’ imprisonment for fraud  in 2002, but he managed to be released thanks to the assistance of the European civil society. In the report, released on the 11th of March, 2003, Amnesty International unequivocally recognised Mukhtar Ablyazov as a political prisoner. At present, M. Ablyazov resides outside Kazakhstan.