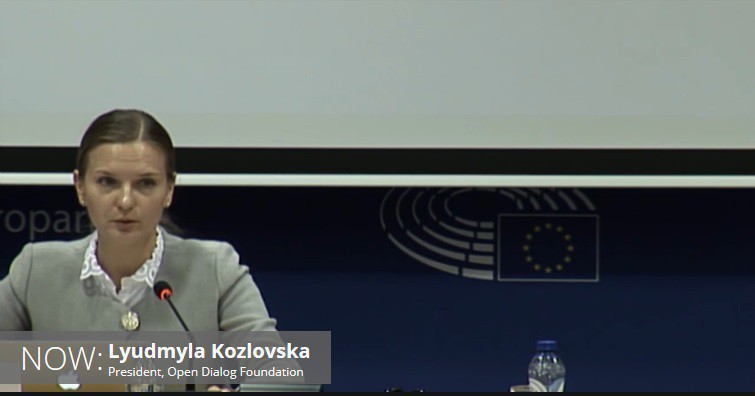 Speech by Lyudmyla Kozlovska, President of the Open Dialog Foundation, at the European Parliament (Full text)

On Wednesday, 19 October 2016, the Open Dialog Foundation in cooperation with the biggest political groups in the European Parliament organized a debate event on “The Minsk Agreements, EU-Russia relations and the role of sanctions”, in Brussels. The event was hosted by Members of the European Parliament: Petras Auštrevičius, Michał Boni, Ana Gomes MEP, Charles Tannock and Rebecca Harms. At the event, MEPs, speakers from the academic world, journalists and representatives of the civil society confronted each other during an interesting debate on the status of the Minsk Agreements and the effectiveness of the Western restrictive measures against the Kremlin. We present a speech by Lyudmyla Kozlovska, President of the Open Dialog Foundation, during the second part of the event on “The Sanctions: Do sanctions work? What is next?”.

Thank you very much. I am extremely delighted to be with you here. I want to underline that European Parliament is, in fact, the only open platform where we can speak about human rights and do something effectively, i.e. release people. I am speaking about this issue as I know that on every side; Russian propaganda is using every opportunity to attack the EU institutions and I believe it is crucial for human rights defenders, for every person in this room, to know that it is really important and that we value your work. My speech is about“The need for new sanctions and how to influence Russia’s policy and save Kremlin’s hostages”.

First of all, I wish to say that President Putin does not honour his commitments and the Minsk agreements do not really work, also in the aspect of the release of hostages. We cannot rely on Putin’s obligations, we cannot trust Lavrov and others. Their acts speak louder than words. But we can and we should care about their reaction to every statement, to every letter and every sanction imposed on them. We should really care to watch their reactions and draw conclusions as to what measures would be most effective.

There is no value in the Minsk agreements as such and they would have been completely hollow without the presence of the Ukrainian army and Western sanctions.

The effectiveness of the sanctions is just a matter of time, but one of the factors is crucial: pro-Western Ukraine and civil society in Russia have to survive longer than Putin. Freezing all the Russian assets abroad, introducing a universal trade embargo and travel ban for its politicians, civil servants and business linked to the Kremlin would result in Russia’s economic decline and growing internal tensions.

And, again, the current sanctions are good. But they have to be strengthened and extended. There are a lot of gaps in them, sometimes their execution is lacking efficiency and there are situations in which Russian officials on whom the sanctions have been imposed, are making fun of them, taking pictures in the heart of Paris and other EU cities. We heard that Angela Merkel (in addition to the UK and the US) intends to enhance the sanctions against Russia. That is obviously good, but, at the same time, it is hard to accept the ongoing Nord Stream 2 project and many other examples of German business cooperating with Russia.

As the Open Dialog Foundation, we hereby call on the EU to pay attention to 3 categories of sanctions.

First, development and implementation of a personal list of sanctions against Russian elites, which could become a preventive measure for political prosecution and kidnaping of Ukrainians by Russian forces. In addition to the people who are being killed in Ukraine every day, there is a category of the so-called  hostages of the Kremlin: Ukrainians, illegally held in custody and tortured in Russia and occupied Crimea. We call them ‘people from the “Let my people go” list’. As the Open Dialog Foundation is working on advocating concrete cases of the hostages of the Kremlin and, first of all, on the case of Savchenko in the past – we can confirm with full responsibility that international attention, especially that of the European Parliament and European Commission, as well as personal sanctions are the means which could help release the hostages of the Kremlin.

The release of Savchenko was not Putin’s good will. It was Putin’s fear about highly negative publicity and potential sanctions against him and Russian officials involved in her case. For this reason, the Savchenko List (which, initially, was just our civil society appeal; an initiative which has not even come into force yet) was so important and so effective.

I would like to remind you that many members of the European Parliament, i.e. more than 50, supported our initiative and drew up a letter to Federica Mogherini. Currently, there are more than 50 persons who have been held in custody by the Kremlin since 2014 only for Russian propaganda purposes. We call their cases politically motivated as their cases are beneficial to the Russian propaganda, explaining their aggressive attacks against Ukraine, and only a few of them were released or paroled. All these arrests or kidnappings are the result of the feeling of total IMPUNITY by Russian elites, and, first of all, Putin. The most recent arrests were carried out just a few days ago, i.e. on 12 October; at least 5 Crimean Tatars were arrested and accused of being extremists. At least one Ukrainian person was arrested when crossing the Dzankoi check point; the reason for his arrest was the possession of a Ukrainian book. This book was recognised by Russian authorities as extremist. How many other cases of this kind are there that we still don’t know about?

We don’t have access to Crimea and so, we cannot carry out regular monitoring of detention places or receive information about the reasons of detention of all these people. We must not forget about them. So, I would like to use this opportunity to call on all of you to develop a list, the Savchenko List. The name of the list is symbolical, and it would include the main category of people, with Putin at the helm, who are responsible for all of the persecution of the people included in the ‘Let My people Go list’. The implementation of the list would exert pressure on Putin and all those accountable for the fate of political prisoners in Russia. I ask you for your support and I know I can count on the involvement of many of you as you are true friends of human rights and Ukraine. We can save them all, sooner or later, but it will take our joint, persistent and decisive efforts. This will help us stop the feeling of impunity. The extension of the list of personal sanctions against the Russian elites would make it uncomfortable and more unreachable for them to come back and use, on the daily basis, the benefits from European products: technology, financial services, transportation hubs, stores, universities and hospitals) and would force them to think about their loses and reconsider the relevance of the anti-Western approach in Putin’s governance. Ordinary Russian citizens don’t have the opportunity to use all of these products, because they don’t have money, they don’t have the possibility to visit the EU countries and because of huge corruption and sanctions, including internal sanctions. And so, these elites have a lot to lose but we have to take these issues seriously and increase the pressure as much as possible. If Putin has to face internal problems, he will struggle for his own survival and the neighbouring countries will have more peace and freedom to shape their own policies.

Second, we should support Russia’s democratic forces (political, civil and media-related) in Russia and abroad as much as possible. And it should be done now, not in two years’ time when it is too late.

Russian civil society underlines that disconnecting Russia from the SWIFT system would break money-laundering operations of the corrupt Putin’s elite and will be, perhaps, a grave blow to their well-being.

The EU should adopt a policy of using every pretext to impose even minor sanctions and enforce all the related decisions (such as the decision on the grating of the $50 billion award to former shareholders of Yukos; introducing the Magnitsky Act similarly as in the US; closing and/or freezing assets of Russia Today etc.). But please, beware of the manipulation of the EU values on the part of Russia. Freezing Russia Today’s assets today is not stopping the freedom of speech, it is stopping Russia’s military propaganda and we have to care about such kind of things. Additionaly, the EU has to encourage and mobilise Ukrainian authorities to maintain the hard sanctions policy towards Russia as well.

When it comes to Russian society, it is ‘a struggle between a fridge and a TV set’. So it is also necessary to remember about the information war and take care about Russians, providing them with high-quality and accessible media content, thus, supplementing the policy of sanctions. The information pillar in necessary but, as for now, it is Putin who holds all the cards.

Third, stopping payments for Russia’s oil and gas (which is technically much easier and faster than stopping transit) or, at least, as Polish MP, Marcin Święcicki suggested, reducing the amount of oil and gas purchased by the EU countries from Russia would decrease the EU’s dependence on them and undermine the economy of Russia.

Russia has a bright future but it is a future without Putin and his cronies. It is a European future. Russia, Ukraine and the EU could and should benefit from this kind of future and stable cooperation but, in order to make it possible, the authoritarian, anti-European Russia must be stopped. The road is clear and sanctions are one of the main directions.