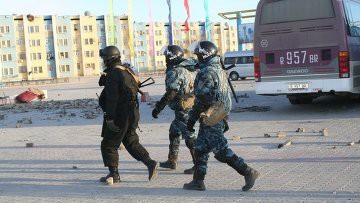 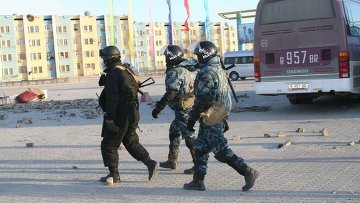 The Appellate Court softened the sentence of the former police officers convicted for abuse of office during the dispersal of the peaceful demonstration of oil workers on the 16th-17th of December, 2011 in Zhanaozen. The ruling of the lower court in the case on mass riots in the village of Shetpe on the 17th of December, 2011 was upheld.

On the 19th of July, 2012, the Appellate Panel on Criminal Cases of the Mangistau Province Court considered the appeals of 5 police officers. On the 28th of May, 2012 they were found guilty of illegal shooting during the dispersal of   demonstrators in Zhanaozen in December 2011. The same court considered the appeals in the case of the riots on the 17th of December, 2011 in the village of Shetpe, Mangistau Province.

According to the decision of the court, the sentencing of former police officers was changed in the sense that they upheld the sentences of imprisonment, but annulled the confiscation of property. The appeal in the case of riots in the Shetpe village was dismissed by the court. “By the decision of the appellate court panel of the 19th of July, 2012, the ruling of the Aktau City Court of the 28th of  May, 2012 was partly reversed in terms of the ruling on confiscation of property of those convicted, and the appeals of the convicts and their lawyers were granted in part. An appeal of the representative of the victims was dismissed”, – the press service of the court reported.

During the meeting of the Appellate Panel on the case of riots in the Shetpe village, interests of the convicted persons: Gabiden Bahitzhan, Nurbolat Sabyrbayev and Yerzhan Mambetov were represented not only by lawyers but also by public defenders. The judge cancelled without explanation a request by Kazhimurat Avezov’s lawyer to provide him with a public defender, and refused to admit new documentation, filed by the lawyers, which proved the innocence of their clients. According to the convicts’ relatives, this proves that the decision of the court was preconceived.

Background information:
On the 21st of May, 2012, a sentence in the case of riots at the Shetpe station was imposed. Four defendants (of 12) – Kazhimurat Avezov, Gabiden Bakhytzhan, Yerzhan Mambetov and Nurbolat Sabyrbayev were sentenced to prison terms ranging from 4 to 7 years. Kasim Ermukanuly was sentenced to two years’ probation. Other defendants were released under amnesty.

On the 28th of May, 2012 the Court of Aktau announced the ruling in the case of five police officers involved in the shooting against demonstrators in Zhanaozen in December 2011. Former police officers – Kabdaly Utegaliyev, Bekzhan Bagdabayev, Rinat Zholdybayev, Yerlan Bakytkaliuly and Nurlan Esbergenov were sentenced to prison terms ranging from 5 to 7 years.

More on this topic:
Zhanaozen , Shetpe