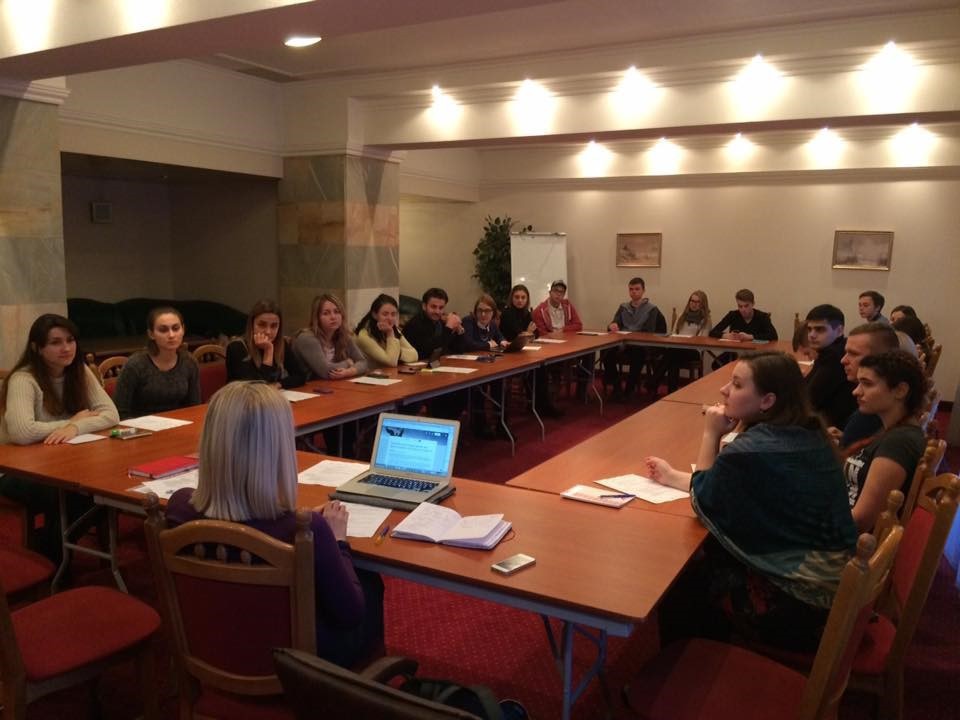 Report on the results of the training trip to Kyiv

On May 05, 2016 European Exchange and Open Dialog Foundation launched the project entitled ‘Support for young people as astimulusfor the strengthening of democracy in Ukraine’. The project is aimed at motivating the Ukrainian youth to participate directly in political and civic processes in Ukraine.

At the final stage of the project, students from Odesa, Kharkiv, Dnipro and Ivano-Frankivsk took part in the training trip to Kyiv (December 4 – 6, 2016). Most of the participants had also taken part in the first stage of the project, i.e. the educational trip to Berlin. The total number of the participants who went to Kyiv was 24 (22 students and 2 schoolchildren). They met the diplomatic representatives of the EU countries, visiting, among other things, the Embassy of Germany in Ukraine and the Delegation of the European Union to Ukraine. Apart from that, the students visited the Verkhovna Rada, met Ukrainian politicians and representatives of NGOs.

In particular, the participants met Yulia Teleshova, the representative of the NGO “Interns` League”, who gave an insightful lecture on the possibility of student internship in the committees of the Verkhovna Rada or in the presidential administration. Audience members asked many questions about the conditions of internship in the Verkhovna Rada and about the possibility of employment after the successful internship. 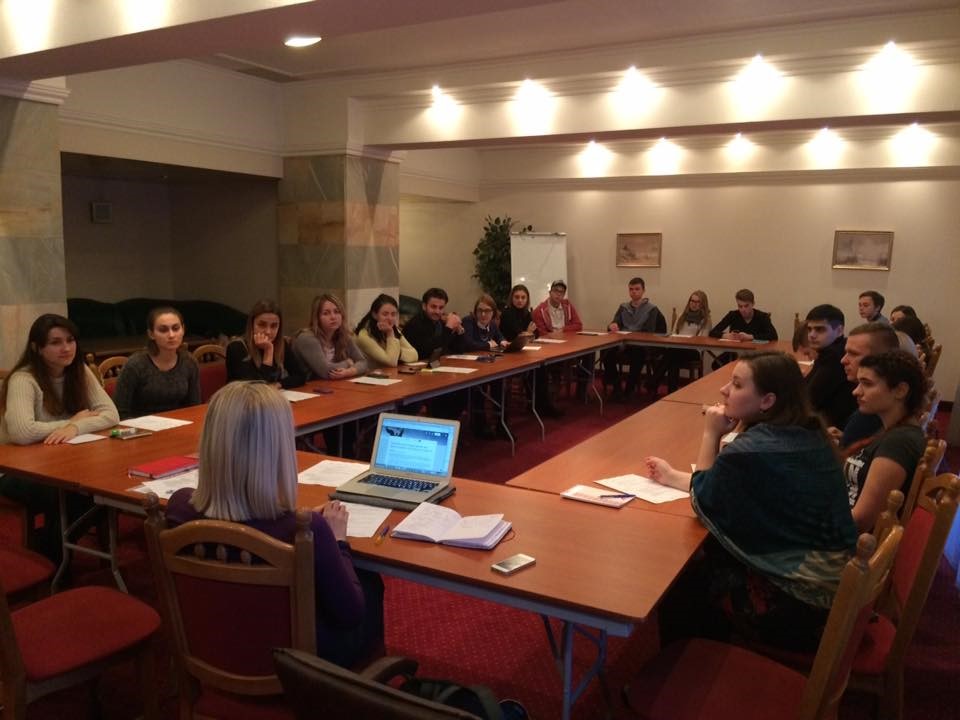 Monday was rich in events. The day started with a tour to the Verkhovna Rada; the participants saw the session hall where bills are passed, learned a lot about the history and architecture of the parliament building, as well as about the work of people’s deputies. The students were impressed by the tour around the headquarters of the supreme legislative body of Ukraine.

To learn more about the activity of the Verkhovna Rada, click here: http://www.rada.gov.ua/

Next, the participants visited the German embassy in Kyiv and learned about its structure, fields of activity and projects it supports. The students talked to Christian Hattendorff, head of the Department for Culture, about the support provided by Germany and EU in general in the process of reform implementation; they learned a lot about political and economical relations between Ukraine and Germany. In addition to that, Hattendorff spoke about numerous educational programs. The students asked how the German diplomatic missions communicate with the German officials and whether these officials influence the activity of the diplomatic missions is different countries. Another question concerned popularisation of the German literature among Ukrainians.

For more information about the Embassy of the Federal Republic of Germany, click here: http://www.kiew.diplo.de/

After that, the participants met Fabio Della Piazza,Head of Political Section at the EU Delegation to Ukraine, andNicholas Burge, Head of Trade and Economic Section at the EU Delegation to Ukraine. Fabio Della Piazza spokeabout the functions of the Delegation as an intermediary between Ukraine – the country that wants to join the EU – and the EU; he defined the Delegation’s objective as explaining the procedure of joining the EU. Another function of the Delegation is establishing contacts with governmental bodies, civic society and journalists. Della Piazza expressed his deep support for Ukraine’s implementation of reforms (judicial system reform, decentralisation, fight against corruption, improvement of the human right situation etc). He agreed that the fight against corruption will take months and not days, but the main thing is that Ukraine has already started these reforms. Apart from that, the students asked questions about the possible influence of the French elections on the sentiment in the EU; they wanted to know whether it can cause changes in the EU’s intentions concerning Ukraine. Other issues discussed were EU’s attitude towards Russia in the context of the continuation of sanctions, and the visa-free regime between Ukraine and the EU.

Burge told the participants about the economic activity of the Delegation, about the steps being taken to stabilise Ukrainian economy and about the key reforms necessary to do that. He emphasised the significant merit of the government on its way to energy independence and reminded about problems and dangers, including the conflict in the East of Ukraine. The participants asked questions concerning the economy; they were particularly interested in the general view of the investment climate in Ukraine and they ways in which students can support the economy.

For more information about the EU Delegation to Ukraine, click here: https://eeas.europa.eu/delegations/ukraine_uk

The day ended with the open discussion entitled “European Integration of Ukraine: What has been achieved after the Revolution of Dignity”.The speakers invited – Benedikt Herrmann (the EU Delegation to Ukraine), Viola von Cramon (Alliance ’90/The Greens), Taras Kachka, (International Renaissance Foundation) and Natalia Senatorova (European Youth Parliament – Ukraine) – spoke about their vision of the issues related to Ukraine’s European aspirations. Maria Simonova, representative of the Eastern Partnership Civil Society Forum, moderated the discussion. Among the persons invited to take part in the discussion were students and civil activists interested in the European integration and the processes of political and civil changes in the country.

To see the detailed report on the results of the discussion, click here: https://ua.odfoundation.eu/a/8012,zvit-za-pidsumkami-diskusiyi-ievropeyska-integraciya-ukrayini-chogo-vdalosya-dosyagti-pislya-revolyuciyi-gidnosti1

The following day, December 6 2016, the participants met Viktor Artemenko and Vadym Misky, representatives of the Civic initiative “Reanimation Package of Reforms” (RPR) – one of the most famous initiatives of the Ukrainian civic society, formed during Maidan. To begin with, Artemenko told the students about the structure of RPR which includes 68 NGOs and 23 expert groups formed by them; he also spoke of the organisation’s objectives. Misky presented the Roadmap of Reforms and spoke about RPR’s achievements. The experts shared their experience of protest actions and pointed out that the most efficient way to criticise the government is via the media, because if the country’s TV channels are talking about something, it means that this is what the society is talking about. It was one of the most motivating meetings, which provided the students with the assessment of the reform process in Ukraine and showed them to which extent the government and official institutions are ready to cooperate with the experts from the civil society.

After that, the participants had a meeting with Marcel Röthig, Director of the Friedrich Ebert Foundation’s Regional Office for Dialogue in Eastern Europe. During this meeting the students learned about the main activities of the Office for Dialogue in Eastern Europe and about projects in which students and young civil activists can participate. The projects that aroused the biggest interest among the participants were the program of the Foundation’s Academy for Social Democracy which provides a possibility of certified distance learning for Ukrainian, Russian and Belarusian students, and the online journal IPG – Internationale Politik und Gesellschaft which functions as an online platform for the dialogue about the international politics and safety. Moreover, Marcel Röthig announced the oncoming research of the youth climate in Ukraine. Similar researches have been conducted in Georgia and Armenia; as soon as this work has been finished, anyone interested will be able to get the comparative analysis of youth movements in all the tree abovementioned countries. In the end of the meeting, the participants discussed the level of interaction of the German political foundations. Röthig pointed out that, while within the German borders these foundations compete politically, they cooperate abroad (in Ukraine in particular) because of their common wish to popularise the principles of German pluralism and demonstrate the diversity of the German political environment.

For more information about the activity of the Friedrich Ebert Foundation’s Regional Office for Dialogue in Eastern Europe, click here: https://www.facebook.com/fesdee/

The last event of the day was the meeting with Ukrainian representatives of the most powerful anti-corruption network organisation of the world, Transparency International. Tetyana Shevchuk and Viktor Nestulya, members of Transparency International Ukraine, spole about the activity of the NGO, its projects and campaigns, including The ProZorro system of electronic public procurement and the possibility of internship at TI Ukraine for the students.

Tetyana told the participants about the mission of TI Ukraine, which lies in the following: preventing the growth of corruption in Ukraine by means of promoting transparency, accountability and scrupulousness of the public authorities and civil society. The participants were interested in how the organisation cooperates with the regional anti-corruption NGOs, whether Maidan influenced Ukraine’s ranking position, whether TI Ukraine is planning to cooperate with universities (and which exactly). In the end Tetyana Shevchuk expressed her hope that most of the participants will become civil activists. 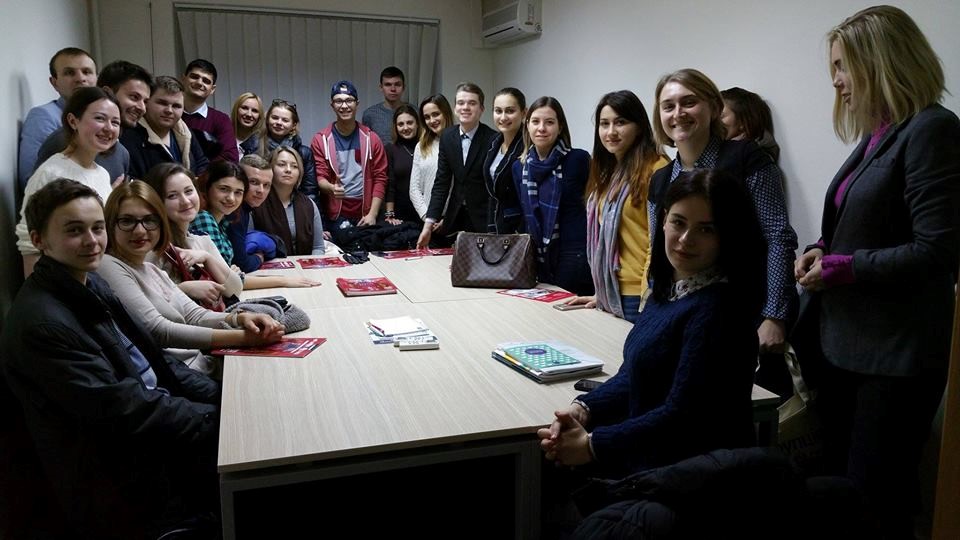 The students also talked to Viktor Nestulya, program director for innovative projects at TI Ukraine, who spoke in detail about the structure and activity of ProZorro. The main objective of ProZorro is reducing corruption in cases when public funds are used to make purchases, and also finding the way to efficiency and economy. If implemented successfully, this plan can help the state regain credibility with the business people and motivate the business people to participate in government tenders. Viktor Nestulya told the students about the procedures conducted by the organisation and about the central element of ProZorro – the monitoring which provides for a detailed description of the state purchases, thus showing whether everything has been done according to the law, whether all the necessary steps have been taken, whether there have been any tricks exercised by this or that party.

For more information about the activity of Тransparency International Ukraine, click here: http://ti-ukraine.org/

The project team was extremely impressed by how active and interested young people are in the issues of the hour. The participants, in their turn, were grateful for the intensive trip rich in events and meetings; they promised to stay in touch and maybe even to carry out some joint projects in the future.