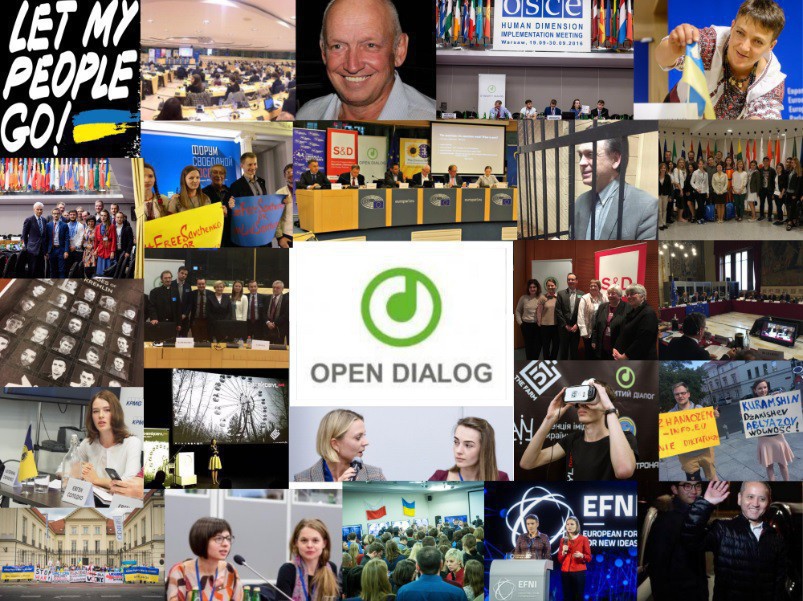 As the Open Dialogue Foundation, we would like to thank you for your support during the past year and wish you all the best in your professional and personal life in 2017!

On this occasion we would like also to share with you some of the ODF’s top achievements of the year 2016, its initiatives, projects and advocacy campaigns, publications and events to promote, support and protect human rights, democracy and rule of law in the post-Soviet area, as well as our ongoing work for the present year.

In 2016 we continued our work on and for political prisoners and refugees in and from the post-Soviet states.

In 2016, thanks to the continued pressure, the international community was able to secure the release of Vladimir Kozlov, the first political prisoner of Kazakhstan (August 2016); as well as these of Nadiya Savchenko (May 2016) and three other Ukrainian ‘hostages of the Kremlin’, Yuriy Soloshenko, Gennadiy Afanasyev (June 2016) and Hayser Dzhemilev (November 2016). Also Yuriy Ilchenko escaped from illegally occupied Crimea (August 2016). In the same month, Umyt Hallyyev, Turkmen independent journalist and former contributor to Radio Free Europe/Radio Liberty was granted asylum and the right to family reunification in the Netherlands, while just before that Gyuzyal Baydalinova, Kazakh independent journalist and editor of Nakanune.kz was released and her sentence was suspended (July 2016). In December 2016 France refused to extradite to Russia and Ukraine Mukhtar Ablyazov, Kazakh businessman and opposition politician, while during the first part of the year Syrym Shalabayev, his brother-in-law was denied to be extradited from Lithuania to Kazakhstan and Ukraine (June 2016), as well as Aleksander Orlow, Polish investigative journalist and human rights defender was released from custody in Ukraine (May 2016).

We are also happy to inform you that on 6 October, 2016 the ODF has concluded an Amicable Settlement within a lawsuit with the Polish “Wprost” weekly magazine, filed by the ODF against the magazine, in connection with the publication of a material concerning the Foundation’s alleged links with ‘the oligarch from Kazakhstan’ (Mr Ablyazov) in February 2014.

Therefore, the ODF would like to thank you once again for your support and ask for it during the present year. We would be particularly grateful for your interest and assistance in the issues and cases of other Ukrainian political prisoners in Russia and illegally occupied Crimea, Kazakh land reform protesters Maks Bokayev and Talgat Ayan, Russian citizen Tatiana Paraskevich in the Czech Republic and a Russian businessman Artur Trofimov in Austria.

We would like also to raise your particular attention to the most recent: risk of extradition of a Russian whistle-blower Nail Malyutin from Austria; political persecutions that involved opponents and critics of a Moldovan oligarch Vlad Plahotniuc, including the cases of lawyers and human rights defenders Ana Ursachi and Eduard Rudenco, as well as the problem of Ukraine’s assistance in the persecution of other post-Soviet states’ political opponents and refugees.

If you appreciate our work, please also support us financially.