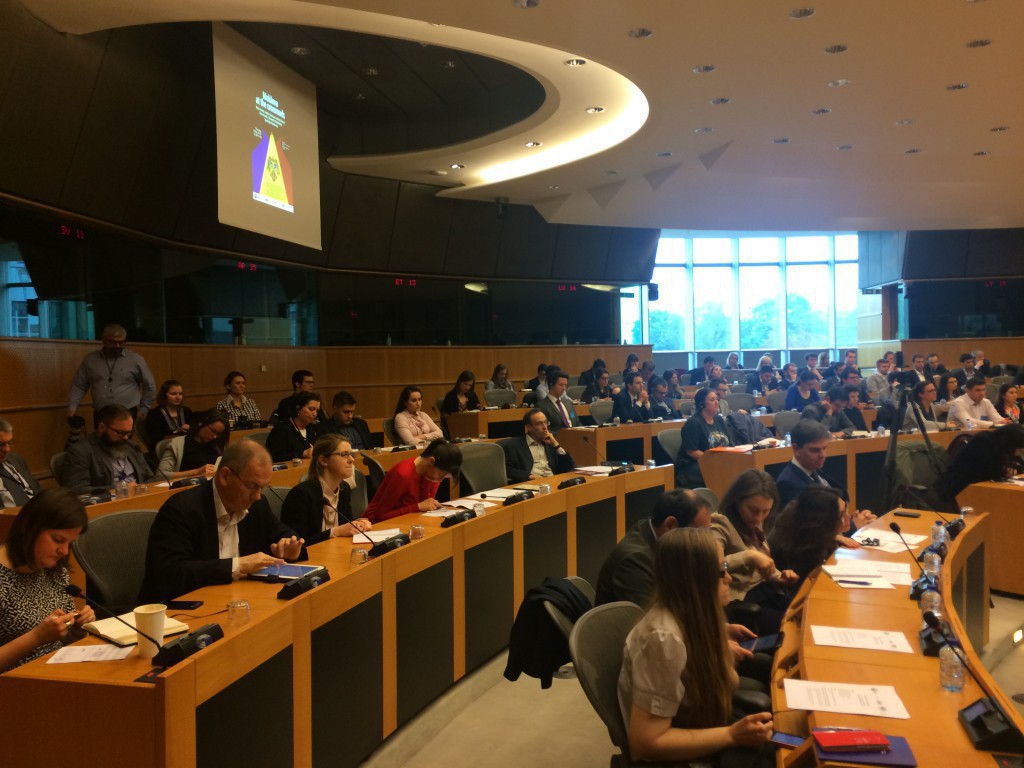 The recent political, reform agenda, human rights and media freedom situation in Moldova were debated today in the European Parliament in Brussels at a conference organised by Members Anna Fotyga (ECR, Poland), Ramona Nicole Mănescu (EPP, Romania), Renate Weber (ALDE, Romania) and Rebecca Harms (Greens/EFA, Germany), in co-operation with the Open Dialog Foundation. Compelling evidence of the Moldovan authorities suppressing political opposition, independent media, civil society and business were presented. A delegation from Moldova, often called as “the state captured by the oligarch Vladimir Plahotniuc”, was composed of the truly pro-European politicians, independent journalist, lawyer and human rights defender, as well civil society activists. The speakers of the event presented to the EU audience the reality picture in the specific areas of the country’s political, economic and social life.

The political opposition leaders Maia Sandu (Action and Solidarity Party) and Andrei Năstase (Dignity and Truth Platform Party) commented on the recent harmful electoral system change proposal in Moldova, initiated by Vladimir Plahotniuc’s Democratic Party of Moldova, in order to keep the power even with extremely low social support. The independent journalist Natalia Morari described the worrying and deteriorating media freedom situation in the country as an oligopoly of media outlets owned directly or indirectly by Vladimir Plahotniuc and the pro-Russian President of Moldova Igor Dodon. The lawyer and human rights defender Ana Ursachi focused on the on-going politically motivated persecution and cases of the Moldovan government’s opponents and critics, by means of blackmail, intimidation and with the use of the state’s law enforcement and justice system, while the civil society activist Alexandru Machedon shared his views on the current corrupted business climate in the country.

All speakers called also on the all EU institutions involved in the process of the EU macro-financial assistance to Moldova, to put strict conditions under which the EU funds will be given to the country, in order to ensure the real reforms implementation, fight against corruption and money laundering, de-politicisation of public administration, independent judiciary and the freedom of media.

The Ambassador of the Republic of Moldova to the EU Eugen Caras, as well as lobbyists representing the Democratic Party of Moldova from Burson Marsteller PR agency were also present and given a chance to take the floor during the Q&A session.

The conference was a part of a 2-day mission organized by the Open Dialog Foundation, during which all of speakers met also with other Members of the European Parliament, public officials from the European Commission, European External Action Service and the European Council, as well as diplomats and journalists from the EU member states.

Anna Fotyga MEP, Chair of the Subcommittee on Security and Defence (SEDE):

“There were two events today dedicated to Moldova’s both political and social situation as well as the reform agenda of the country. During SEDE meeting we discussed Russian propaganda visible in Moldova also in the domestic media. The topic was presented by representatives of EU institutions as well as civil society experts speaking on freedom of media in Moldova. I am concerned by the scope of corruption existing in Moldova, media monopolies, also in terms of ownership, and false dichotomy of political scene. I hope that that honest assessments of transformation difficulties helps Moldova’s society in choosing both Western direction and reform of its state and social structure. Combating corruption I consider the crucial issue to be tackled by the political elite of Moldova.”

Rebecca Harms MEP, Chair of the Delegation to the Euronest Parliamentary Assembly (DEPA):

“I urge the Moldovan authorities to speed up the reform process and I express my concern about the slow pace of the implementation of these reforms that is currently risking a major democratic backlash in the country. I call on the Moldovan government to seize all the opportunities provided by the EU-Moldova Association Agreement, to engage seriously in the reform process and to step up the fight against corruption to achieve significant positive changes and thus restore the trust of the population in the state institutions with regard, in particular, to the ongoing investigation on the bank scandal. I very much appreciate the efforts of the Moldovan civil society that should be fully involved in this process and act as a watchdog on behalf of all the Moldovan people.”

“A genuine respect for the rule of law, human rights and the democratic rules are basic principles that brought just benefits to those countries that followed them. These are not just words on a piece of paper. They reflect the true needs and interests of the citizens of Moldova. European Union is involved in monitoring the situation in Moldova and supports financially, politically and diplomatic this country in its democratic path. Keeping the corect direction is what motivates us in our assistance.”

“There is no functional democracy without standing political rights. This encompasses respect for the independence of the judiciary, fair elections, which implies the observance of citizens’ rights to be correctly informed, and a free press. Concentration of media ownership impedes it from fulfilling its role of watchdog in a democratic state, while political ties and leverage on the judicial power crumbles the backbone of a democracy – the separation of powers. The importance of a true political pluralism is unquestionable, but cannot be ensured in a society where political migration is both legally and morally accepted. Therefore a legal framework should restrict political migration, thus safeguarding the principles of a pluralist democracy.”