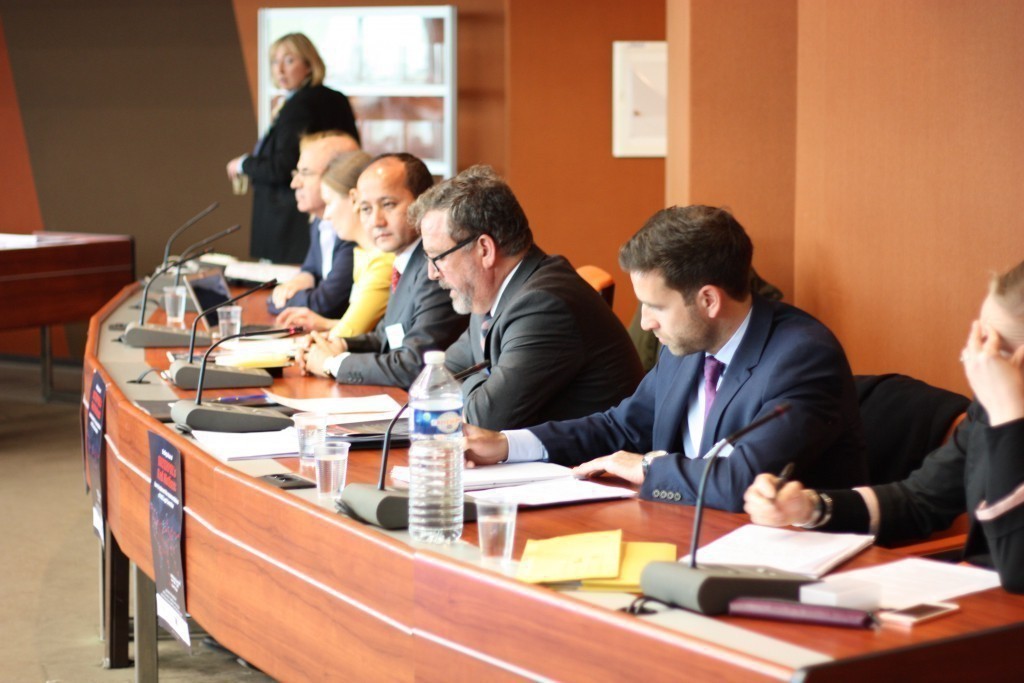 On Wednesday, 26 April, 2017, experts, politicians, NGOs and victims of abusive Red Notices gathered at the Parliamentary Assembly of the Council of Europe to assess current improvements and challenges of INTERPOL’s system and provide recommendations on reforms of INTERPOL. The event ‘Ending abuse of INTERPOL’s Red Notices: how to implement the recommendations of PACE Legal Committee’ was co-hosted by the Committee on Legal Affairs and Human Rights of the PACE, the Special Rapporteur of the Parliamentary Assembly of the Council of Europe (PACE) – Member of the Parliament Mr Bernd Fabritius (Germany, EPP/CD) along with the Open Dialogue Foundation.

In his opening remarks, Member of the PACE, Mr Bernd Fabritius, welcomed constructive cooperation between INTERPOL and the Council of Europe towards a common goal, i.e. the ‘improvement of the global notice of INTERPOL with better respect for human rights’. Mr Fabritius backed the reforms, adopted by the Commission for the Control of Interpol’s Files (CCF) in autumn 2016 and stressed on the one-year period to monitor the progress of such reforms. However, as Special Rapporteur of the PACE and author of the report ‘Abusive use of the INTERPOL system: the need for more stringent legal safeguards’, Mr Fabritius reminded that major financial and human resources should be allocated to INTERPOL to cope with a sharp increase in the number of Red Notices. As stated by him, ‘higher amount of financial resources should be covered by those NCBs (National Central Bureaus) which are proven to have issued the most abusive notices in the system’ and added ‘we should have a black list of unreliable NCBs’.

Introductory remarks were followed by a statement by Mr William Browder, British financier, founder of ‘Hermitage Capital Management’ and leader of the global Magnitsky justice campaign. The reason why Mr Browder became a case of putative Red Notice is linked with the disclosure of a large-scale corruption scandal in Russia which led to Mr Browder’s expulsion from the country and his subsequent persecution. Having being put on INTERPOL’s list not once but as many as four times by the Russian authorities for politically motivated reasons, Browder’s case is ‘a perfect example of Russia being a persistent abuser of INTERPOL, not just in multiple cases, but multiple times in one case’.

States which violate the constitution and the rules of Interpol are only part of the problem, as those who influence these states, are also able to influence Interpol as an international body.

According to Mrs Ana Ursachi, Moldovan lawyer and founder of the civic movement #NuMaTem (‘I am not afraid’), Moldovan citizen, Vitalie Pîrlog, recently elected as Chairman of the CCF, is politically influenced by the Democratic Party of Moldova, whose Chairperson is the Moldovan oligarch Vladimir Plahotniuc. ‘Pîrlog’s past as former Minister of Justice during the Communist regime in Moldova, as well as his controversial role within the Moldova’s Twitter Revolution in 2009 raise great concerns over the election mechanism of the CCF’s members’, Mrs Ursachi said.

Mr Mukhtar Ablyazov, Kazakh dissident and leader of the opposition movement ‘Democratic Choice of Kazakhstan’, was also present at the event in order to share his long story of political prosecution at the hands of Nazarbayev’s regime. Mr Ablyazov addressed the audience with the following statement: ‘I am one of the victims of abuse of INTERPOL’s mechanism for political prosecution. My case is different from other cases because not only Kazakhstan tried to directly prosecute me but they also acted through other countries: Russia and Ukraine’. Despite the fact that the political nature of the BTA Bank case in Kazakhstan has been already recognised by 10 countries; more than 40 former colleagues and family members of Mr Ablyazov are still being persecuted. By means of kidnappings and fabricated cases, Kazakhstani authorities ‘seek to obtain testimonies against Mr Ablyazov, opposition journalists and several political activists in the country’. He went on to say: ‘It’s extremely easy for Kazakhstani authorities to place persons’ names in the Red Notice list, but every person who is included in the list has a long way before his name is removed from the list’.

Mr Tomás Navarro Blakemore, representative of Destination Justice, stressed on the need to provide victims of abusive or unjustified Red Notices, the right to challenge the system, thus granting them compensation. He stated: ‘victims should not only be granted direct compensation but also social, economic, legal and humanitarian assistance’. Preventive measures should also include: ‘the possibility for the CCF to consult properly national and international bodies (article 21 of the INTERPOL CCF’s Statute) and directly reexamine cases when there are repetitive Red Notices requests, thus bypassing the NCBs’.

At the same time, Mrs Lyudmyla Kozlovska, President of the ODF, emphasised the need to develop a mechanism for removing persons from the international wanted list in the event that these persons reside in a non-democratic country where they cannot benefit from political asylum or respect for human rights. She enunciated ‘there are cases in which persons are under the threat of arrest/extradition or have already been arrested in unsafe countries without the possibility to obtain international protection, and it is in this case that they become hostages’.

Mrs Kozlovska also recommended: ‘the States which repeatedly violate Art.3 of the Constitution, should be deprived of the right to nominate their candidates as members of the CCF until the number of violations significantly decreases’. She underlined that, in order to avoid misuses of INTERPOL, ‘an independent advisory body formed of representatives of PACE, OSCE, the European Parliament, the UN and human rights NGOs should have the authority to provide the Commission with expert opinions on various cases’.

‘A monitoring framework of the reforms undertaken by INTERPOL should also be developed’ underlined Mrs Libby McVeigh, Legal and Policy Director of Fair Trials. Cross-border justice and respect for human rights are one of the missions of Fair Trials which welcomed recent reforms on the part of INTERPOL. Mrs McVeigh stated: ‘such reform process, including the refugee policy to prevent refugees to be subjected to Red Notices, the reform of the victims’ procedure to review cases of selective Red Notices, as well as changes adopted by the CCF last year, has the potential to really strengthen INTERPOL’s mechanism’. She ensured that Fair Trials along with a network of civil society partners will actively monitor future implementations and make sure that INTERPOL would provide public information and data on the reform process.

In closing of the event, some important contributions were made by lawyers, auditors and members of the PACE from the audience, such as: MP Mr Eerik-Niiles Kross (Estonia; ALDE), MP Mr Emanuelis Zingeris (Lithuania; EPP/CD) and Prof. Dr. Herta Daeubler-Gmelin, former Chairperson of the Committee on Legal Affairs and Human Rights of the PACE.

Following the debate, the Parliamentary Assembly of the Council of Europe has called on INTERPOL ‘to conduct better checks on the people named in “red notices” – a form of international arrest warrant – to prevent States from abusing the system in order to persecute political opponents beyond their borders’. Despite Kazakhstan’s attempts to influence the resolution, Mr Fabritius’ report was successfully adopted unanimously by 51 Members of the PACE.