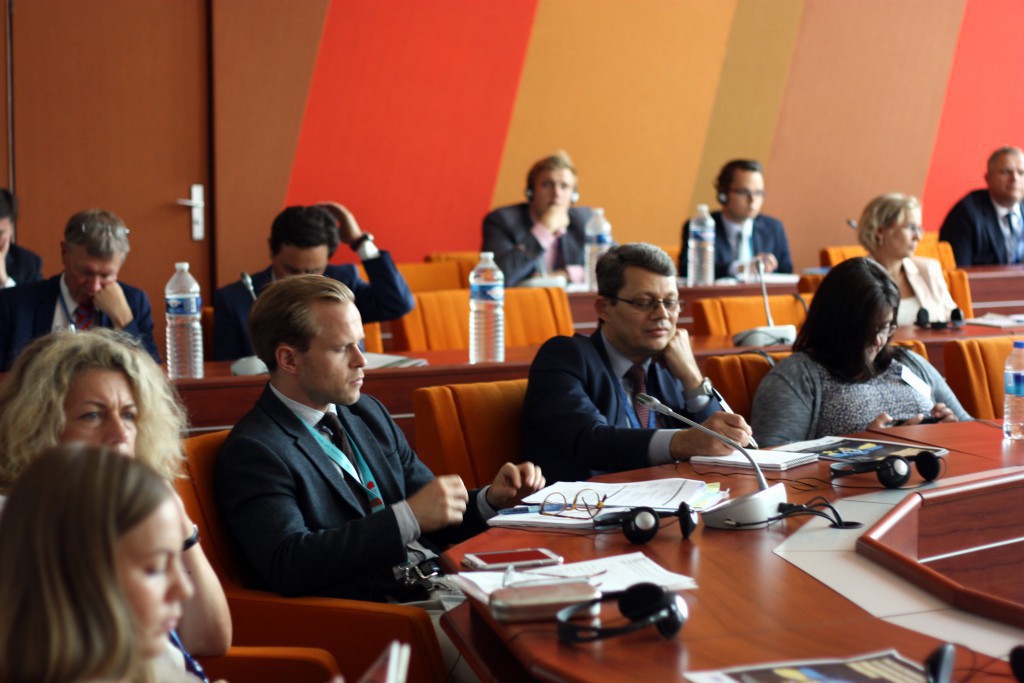 On Tuesday, 27 June, 2017 during the Summer plenary session of the Council of Europe Parliamentary Assembly (PACE), the Open Dialog Foundation organized a thematic discussion about “Political Persecution in Ukraine and Moldova. How political corruption undermines reformers’ efforts”. The event was co-hosted by the Monitoring Committee and Members of the PACE: Mr Serhiy Kiral (Ukraine; EC) and Ms Kristýna Zelienková (Czech Republic; ALDE).

The event featured an accomplished line up of experts, Members of the PACE, representatives from the civil society and pro-reform opposition of Ukraine and Moldova who reiterated the urgent need to tackle political corruption, implement anticorruption reforms and stop politically motivated persecutions against reformers and critics of the ruling élite.

Opening the conference, Mrs Lyudmyla Kozlovska, the President of the Open Dialog Foundation, introduced the wide-ranging program of the event which was made up of two panels, respectively, on Ukraine and Moldova. Calling upon the Council of Europe and its Member States, Mrs Kozlovska explained that a big issue, both for Moldova and Ukraine, is that “the difference between recommendations and implementation unfortunately became a huge gap in the two countries”. This was all the more important in light of recent events, such as “individual cases of politically motivated harassment and persecution of those who struggle for implementation of reforms or fight against corruption”, stressed Mrs Kozlovska.

As reported by the Foundation: “for the first time, in several years, the international community has noticed the presence of political prisoners and political persecution in the Republic of Moldova…this is a clear illustration of the problem – repeatedly pointed out by the EU and the US, that is the use of illegal and selective justice as an instrument to combat political opponents in the country”.

According to Mrs Kozlovska, this trend is being observed in Ukraine as well: “A dangerous policy of the government let the reprisals of pro-reform forces and activists; it is unacceptable that representatives of the parties ‘Samopomich’ and ‘Democratic Alliance’, activists and officials of anticorruption bodies became victim of political persecution and harassment”, she said. Mrs Kozlovska also recommended that without an effective investigation of such cases of harassment and attacks toward activists and civil society actors, the Ukrainian government will likely lose the support of the population.

Ms Kristýna Zelienková, a Member of the PACE and former rapporteur on the political consequences of the conflict in Ukraine, presented her experience and recalled the deep concerns voiced by the Ukrainian civil society. Speaking about the country’s reform agenda, Zelienková stated: “we know that it will take a long time and we cannot expect that everything will go smoothly but as I have learnt, there is a strong civil society in Ukraine which is working hard to take care of the future of its country”. As for Moldova: “the situation in the country is desperate and we should help Moldova to stabilize”.

Mr Mykhailo Zhernakov, Director of ‘DeJuRe Foundation’ and Board member of the Ukrainian NGO ‘Reanimation Package of Reforms’, told the event organizers about the government’s practice of pullback from the reforms by means of introducing legislatives obstacles to NGOs and exertion of pressure. “We are under the threat of reversing the reforms we have achieved so far. What’s happening now in Ukraine is a new trend: state institutions are targeting and intimidating civil society actors…There are constant parliamentary attempts to undermine and put NGOs and other anticorruption bodies, such as NABU, under more pressure”, said Zhernakov.

Mrs Viktoriia Voitsitska, Member of the Verkhovna Rada and a Member of ‘Samopomich’ party showed some examples of political harassment of pro-reform and opposition politicians in her country. Because of her anti-oligarchic stance, particularly in the energy and gas state sector, Mrs Voitsitska herself became victim of an accident which is believed to be politically grounded and almost costed her life. She explained that the Presidential Administration is involved in several attacks against members of the party, such as those against the Mayor of Lviv, Mr Andriy Sadoviy, and the intentional city’s garbage blockade. “We see the Presidential Administration using the governmental institutions to allow few people to enrich themselves and protect their vested interests…Unless there is a real fight against corruption, we can’t talk about human rights”, she concluded.

A member of the ‘Petro Poroshenko Bloc’ from Ukraine, Mr Volodymyr Ariev, was also invited to listen and participate in the discussion. Speaking about the country’s internal divisions, Mr Ariev stated: “we have a very tense situation within our state but we are trying to keep the cooperation open in this regard…What I think is that we should not expose our internal political fights on the international level, but rather attempt to solve the problems”.

The event also brought together prominent representatives from the Republic of Moldova. Speaking about the state of their country, Mrs Ana Ursachi, human rights defender and founder of #NuMaTem – #I’mNotAfraid civil movement and Mr Alexei Tulbure, ex-Ambassador of Moldova to the United Nations and to the Council of Europe, illustrated the illegal influence exercised by the Moldovan oligarch and influential politician, Vlad Plahotniuc, on Moldova’s judiciary institutions and law enforcement agencies.

As she explained, by virtue of being a human rights activist and a defence lawyer in many sensitive cases involving Plahotniuc’s circle, Mrs Ursachi became a target of criminal proceeding. Speaking on behalf of the political prisoners she defended pro bono, Mrs Ursachi told the audience: “I call upon the international community not to turn a blind eye when, in Moldova, persons like Grigore Petrenco are convicted because of their right to protest”. While Mr Tulbure added: “Institutions, including the parliament and the government, are not acting independently. With a support of less than 10%, the government proposed to shift from a proportional system to a majoritarian one. We should carefully look at the Venice Commission’s recommendations, as well as the example of Ukraine and Romania where none of the candidates presented by the opposition won”.

Reflecting on critical insights of Moldova and Ukraine’s ‘European path’, Members of the PACE Mrs Marianne Mikko (Estonia; ALDE) and Mr Emanuelis Zingeris (Lithuania; EPP) took the floor. In this regard, Mrs Mikko said: “What is now essential to Moldova’s development more than ever is the respect of the rule of law. If I have rights and if there is someone who abuses them, I go to the Court and I am sure I will have my rights back, but unfortunately, this is not the case in Moldova”, she commented. While Mr Zingeris addressed Ukraine’s representatives of the government with the following statement: “pro-reform opposition should cooperate together with the democratic elected government of Ukraine towards a common Western path. Government must include opposition forces and listen to each other in order to reach a political sensitiveness within such state institutions”.

Summing up, Mr Serhiy Kiral stressed the need to draw attention to political corruption as a dangerous phenomenon which is crippling the path of Ukraine and Moldova – two nations in transitions. He also suggested that a special motion of resolution within the PACE should be tabled in order to assist the Member States in effectively tackling corruption schemes. Mr Kiral gave his final remarks and stated: “cases of corruption we heard today say that political corruption is becoming more barbarian and operates through more innovative tools to fight minority and opposition. This platform should help us to better understand how we should fight back such tools and how we should not let young democracies down”.

In closing of the event, a Q&A session allowed members of the ‘Petro Poroshenko Bloc’ and other relevant participants to contribute to the discussion.

The conference was part of a 4-days mission in Strasbourg during which the Foundation and a delegation from Ukraine and Moldova had the chance to meet with public officials, diplomats from the Council of Europe, as well as Members of the PACE. Following our concerned appeal, on the 29 June, 2017, 21 MPs of the Parliamentary Assembly of the Council of Europe signed a written declaration “The authorities of the Republic of Moldova and Ukraine are urged to cease harassment and political prosecution of pro-reform forces“.

See the full gallery of the event

See the video messages of our guests: