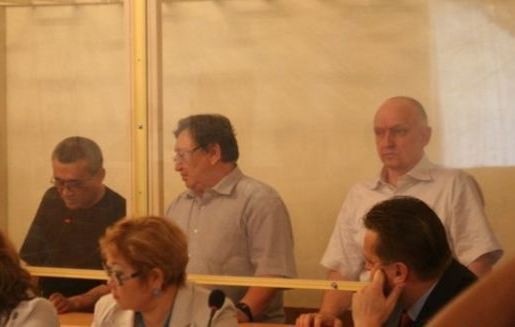 Kazakhstan: the trial of the oppositionists began with gross violations of international standards for fair trial

On the 16th of August, 2012, at 10:00 am, in the Mangistau Regional Court in Aktau, the trial of Vladimir Kozlov, the head of the unregistered opposition party “Alga!”, Serik Sapargali,  a social activist of the “Khalyk Maidany” (“The People’s Front”) and Akzhanat Aminov, the leader of the strike movement, began.

The charges against the Vladimir Kozlov and Akzhanat Aminov are based on three articles of the Criminal Code of  the Republic of Kazakhstan (hereinafter referred to as the “CC of the RK”), namely:

1.  Article 164, paragraph 3 (“incitement of social hatred”),
2.  Article 170, paragraph 2  (“calling for the overthrow of the constitutional order”),
3.  Article 235, paragraph 1 (“the establishment and management of an organised group with a view to committing one or more offenses as well as participation in it”).

Serik Sapargali received charges under two articles of the CC of the RK, namely:

Akzhanat Aminov and Serik Sapargali pleaded guilty. The leader of the unregistered party “Alga!” Vladimir Kozlov claimed that the allegations were fabricated.

According to the prosecution, Vladimir Kozlov headed an organised criminal group (hereinafter referred to as “OCG”), in which he joined forces with the opposition politician Muratbek Ketebayev, currently residing outside of Kazakhstan, as instructed by the banker Mukhtar Ablyazov who is currently on the run, and from whom he allegedly received funds on a regular basis to finance the OCP. 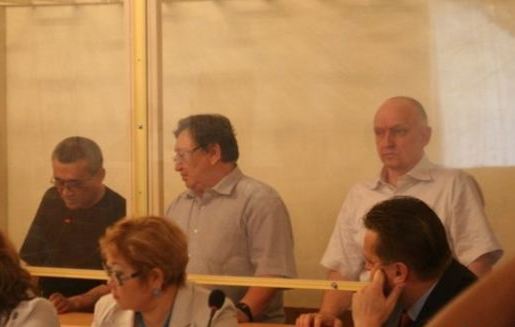 Notably, many passages from the speech of the prosecutor caused laughter in the court room: “… the trespasser Ablyazov, having made sure that the increase in the welfare of the nation does not give him an opportunity to realise his political ambitions, chose the path of political extremism”, “… radicalised media under the brands: “Golos Respubliki” (“The Voice of the Republic”), “K plus”, “Vzglyad”  (“The Viewpoint”) of the media holding company owned by the trespasser Ablyazov” and so on.

According to the prosecutor, the OCG, in which also Serik Sapargali and Akzhanat Aminov participated, was operating with the intent of inciting social hatred and calling for the violent overthrow of constitutional order.  The prosecutor also mentioned a Skype conference, which was held, as he stated, by the leaders of the OCG for criminal purposes.

According to the prosecution, Vladimir Kozlov managed to direct the labour dispute of oil workers into a political track – at a meeting with the striking oil workers in Zhanaozen, opposition politicians deliberately pointed to the inequality in income between top managers of oil companies and general workers. As a result, according to the prosecutor, it became impossible to conduct meaningful negotiations between striking workers and the managers of oil companies. Also, for this reason, says the prosecutor, it was impossible to stop the months-long strike. As a result, the prosecution concluded that all these factors led to the mass unrest.

The prosecutor qualifies the distribution of leaflets with the inscription: “Lift up your head, the Kazakh man!”, “Take off the yoke from your neck!”, which were spread among oil workers, as a means of calling for the violent overthrow of the constitutional order.

Thus, according to the prosecutor, the unregistered opposition party “Alga!”, headed by Vladimir Kozlov and Muratbek Ketebayev, is an extremist organisation. During the accusatory speech of the prosecutor, Vladimir Kozlov presented the audience with a piece of paper on which it was written: “1937”. Previously, he drew parallels between today’s political developments in Kazakhstan and the Stalinist oppression which achieved its peak in 1937.

Judge Berdybek Myrzabekov who was appointed to lead the case, previously led the trial on “the riots in the village of  Shetpe”.

The trial is open, and at the same time, journalists are prohibited from using any kind of technology, including dictaphones. Only handwritten notes are allowed. The only exception was at the beginning of the trial on the 16th of August, 2012, when the judge allowed reporters to take photos and shoot video for 10 minutes.

Observers, including representatives of international organisations and the media, noted that the beginning of the process was accompanied by numerous gross violations of international standards of fair trial. Here are some examples:

I. Limitation of the allotted time period for familiarisation of the defendants with the materials of the case,  inducing the consideration of the case within the shortest possible time by the NSC investigative group, the prosecutor’s office and the court.

On the 9th of August, 2012, within one day, employees of the Prosecutor’s Office of the Mangistau Province  “became familiarised” with the materials of the criminal case of the oppositionist Vladimir Kozlov. The files comprise 62 volumes (approx. 11 000 pages), and on the same day they signed and “studied” the bill of indictment which was more than  1300 pages long which was  issued against Kozlov, Sapargali and Aminov. As we reported earlier, Kozlov was given only 12 days to become familiarised with the case, although the investigation commenced on the the 23rd of January, 2012, from the moment of the arrest of Ayzhangul Amirova, an activist of the social movement “Khalyk Maidany” (“The People’s Front”) until the 13th of July, 2012, i.e. for the period of almost seven months, and the investigative process was undertaken by 67(!) people.

According to the human rights defender Yevgeniy Zhovtis, by this action, Article 14 of the UN International Covenant on Civil and Political Rights is being violated. According to this Article, “every person, during consideration of any criminal charge filed against this person, shall be entitled to the following minimum guarantees, in full equality: … b) to have a sufficient amount of time and opportunity to prepare his defence and to communicate with his chosen counsel…».

The human rights activist Yevgeniy Zhovtis was outraged with the fact that Judge Myrzabekov violated Article 336 of the Code of Criminal Procedure by failing to pass the indictment to the defendant in due time, and the judge dismissed the request of the defence to postpone the trial and to give Vladimir Kozlov the opportunity to become familiarised with the indictment within 3 days. “This is a gross violation of the standards of the Code of Criminal Procedure,” – said Zhovtis.

II. Lack of professional translation from Kazakh to Russian language of the investigation materials and of the trial, resulting in considerable variations in meaning and the misrepresentation of facts both by the prosecution and the defence.

The trial is conducted in the Kazakh language, but the translation into Russian, according to comments made by the defence and by the observers of the process is carried out with significant difference in meaning. So, in reply to the question of Judge Berdybek Myrzabekov addressed to the defendant: “Do you understand the indictment?”, Vladimir Kozlov answered: “This is the year 1937!” and it was interpreted from Russian to Kazakh language as “Yes, I do.”

It is indicative that on the second day of the trial, on the 17th of August, 2012, the interpreters were in posession of the previously prepared text of the statement of the prosecutor Amirgali Zhanayev in the Russian language, and they read it from the computer screen. But, despite this fact, ‘difficulties with interpretation’ continued. According to observers, the prosecutor missed whole paragraphs, and interpreters couldn’t find the right place in the text for a long time, then, trying to find a solution, they began to translate what was being said, thus forgetting the meaning of the words spoken by the prosecutor. Sometimes, the following was uttered: “… With the use of the constitutional order, Ablyazov, Ketebaev, Kozlov tried to destroy the constitutional order.” At least 6 or 7 times the prosecutor relayed an excerpt from the text of the leaflets, allegedly distributed in Zhanaozen last year, “Kiely Mangystau kureskerler! Bastaryndy koterinder! Zhelkelerindegi zhendetti tusirinder!”, which in a literal translation into Russian means the following: “Warriers of the holy Mangistau! Raise your head, arise! Cast off the executioner from your neck!”. But time after time, the interpreter did not wish to translate these words into Russian and repeated them in the Kazakh language. Another time, a new interpreter expanded the abbreviation UOS-5 (Borehole Maintenance and Management) as Department of Social Wefare.

III. Ignoring complaints and petitions filed by defendants and their counsels, failing to give motivated answers to them.

On the 16th of August, 2012, the court heard and rejected all petitions, filed by Vladimir Kozlov and his counsels, including the motion for recusal of the judge Berdybek Myrzabekov. After lunch, on the same day, the indictment was read out to the defendant. During the reading, it transpired that the presented indictment does not correspond in full with the text of the indictment, a copy of which was in the possession of the counsel of Vladimir Kozlov. The attorney Venera Sarsenbina, who is defending the  opposition leader, filed a motion regarding this issue, but the judge did not interrupt the speech of the prosecutor.

As of the 18th of August, 2012, the questioning of witnesses began. The velocity of the judicial consideration in the case of the oppositionists exceeds the expectations of even the most pessimistic observers of civil society in Kazakhstan.

The Open Dialog Foundation is deeply concerned by the fact that the trial of Vladimir Kozlov and other representatives of the opposition attracted no attention from foreign organisations. To date, the defendants and civil society in Kazakhstan have been left to fend for themselves during the trial, designed to destroy the opposition politicians and independent media, and which is in gross violation of international fair trial standards. Despite the resolution of the 15th of March, 2012 on the human rights situation in Kazakhstan, no official observer missions from the European Union, European Parliament, OSCE, or the representatives of the United States are present at the trial.

We hereby urge the international community to promptly form observation missions and to send them to Kazakhstan. Local observers believe that the events that are going to take place now during the trial of the oppositionists in Aktau will be disastrous for the generic approach and attitude of the Kazakh authorities to the opposition, journalists, civil society activists, etc. The trend of mirroring Russia’s repressive methods by Kazakhstan is becoming more and more apparent: the trial of Pussy Riot highlighted  Russia’s regression back to the  religious, archaic Middle Ages. Kazakhstan is also rapidly moving in the same direction, albeit in the political sphere.

However, experience shows that Kazakhstan, unlike Russia, is sensitive to the reaction of European and Atlantic civil society. The release of the editor of the ‘Vzlgyad’ newspaper Igor Vinyavskiy, the theatre director Bulat Atabayev and a young politician and journalist Zhanbolat Mamay may serve as an example of such influence.

In this case, each letter interceding for them, sent to the Embassy of Kazakhstan, helped them avoid up to 12 years in prison and provided untold support to the civil society in Kazakhstan in upholding human rights and democratic values.