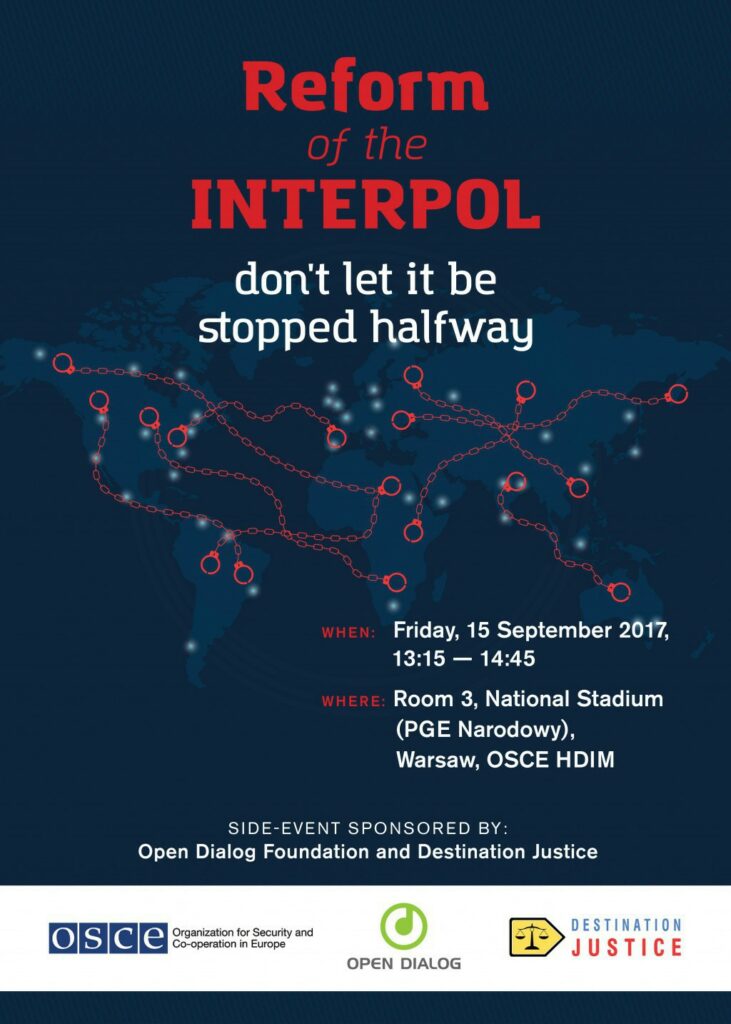 Invitation to a seminar “Reform of the INTERPOL: Don’t let it be stopped halfway” – OSCE HDIM 2017

Recent abuses of INTERPOL by non-democratic states, such as the Red Notice issued by Turkey to detain a German writer in Spain, Mr Doğan Akhanlı and other relevant cases in Russia, Moldova, Kazakhstan and Azerbaijan, show why the reforms introduced by INTERPOL last autumn should be implemented decisively and without delay.

The adoption of the report “Abusive use of the INTERPOL system: the need for more stringent legal safeguards” by the Parliamentary Assembly of the Council of Europe (PACE) represents an important support for those civil society organisations, such as the Open Dialog Foundation, which followed the reformation process closely and now call for further improvements of the joint efforts achieved so far.

Therefore, the Open Dialog Foundation, in partnership with Destination Justice, would like to kindly invite you to the seminar “Reform of the INTERPOL, don’t let it be stopped halfway”, which will be held in Warsaw on Friday 15 2017, from 13.15 to 14.45 pm, at the premises of the National Stadium (PGE Narodowy), Room 3, on the occasion of the OSCE HDIM 2017. 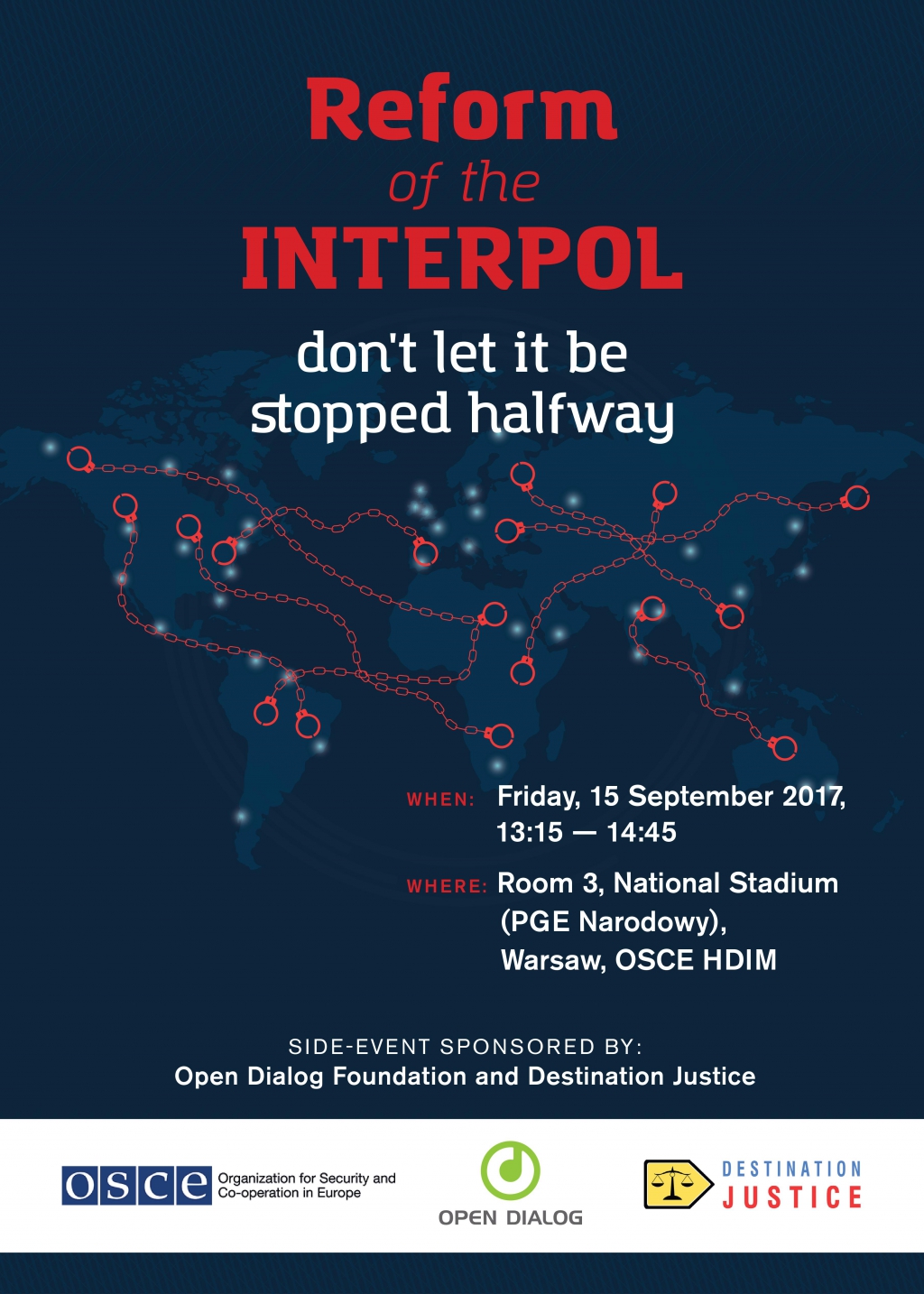 During the event, the Open Dialog Foundation will present its assessment of the reforming process and a list of 16 recommendations contained in the new report (available HERE), that will enable to move it towards addressing the most present challenges and practices adopted by the authoritarian governments.

Particular attention will be given to the victims of Red Notice abuse from Turkey, Kazakhstan, Russia, Azerbaijan and Moldova. The discussion will focus, inter alia, on:

a) ensuring the independence and integrity of the Commission for the Control of Interpol’s Files;

b) taking actions against persecution of entire families;

c) creation of a compensation fund for the victims of misuse of INTERPOL;

d) stressing on the preemptive approach to avoid persecution of persons who risk being enlisted for political reasons;

e) as well as developing answers to practice of targeting people residing in unsafe third countries.

Among the confirmed speakers, who will present their testimonies and expertise, there are:
– Mrs Ana Ursachi (#NuMaTem), an exiled Moldovan lawyer and human rights defender, founder of the civic movement #NuMaTem (‘I am not afraid’);
– Mrs Jamilya Aimbetova-Tokmadi, wife of Mr Muratkhan Tokmadi, a Kazakh businessman held in the detention facility of the National Security Committee of Kazakhstan, pressured to provide forced testimonies against the dissidents;
– Mrs Lyudmyla Kozlovska (Open Dialog Foundation), President of the Open Dialog Foundation, Polish NGO advocating for victims of misuse of the Interpol’s system;
– Mr Marcin Swiecicki, member of the Polish Parliament.

Also, messages from a number of victims of INTERPOL’s abuse who due to their legal situation or location cannot travel, will be presented. Those include:
– Mr Akhmed Zakaev, former Deputy Prime Minister and Prime Minister of the unrecognised Chechen Republic of Ichkeria, granted political asylum in the UK;
– Mr Anatoliy Pogorelov, Kazakhstan, former BTA Bank employee, at risk of extradition from the United Arab Emirates;
– Mr Yan Andreyev, the former head of the Tutaev district of the Yaroslavl region (Russia);
– Mrs Leila Khrapunova, whose family members are subject to extradition requests due to public support provided to the family of Mukhtar Ablyazov, a prominent dissident;
– Mrs Leyla Yunus, the most prominent Azerbeijani human rights defender, political refugee;
– Mrs Silvia Palomba (Destination Justice), Director of Destination Justice, human rights NGO.

More information on the Human Dimension Implementation Meeting of OSCE 2017, side events and agenda could be found here: http://www.osce.org/odihr/hdim_2017.