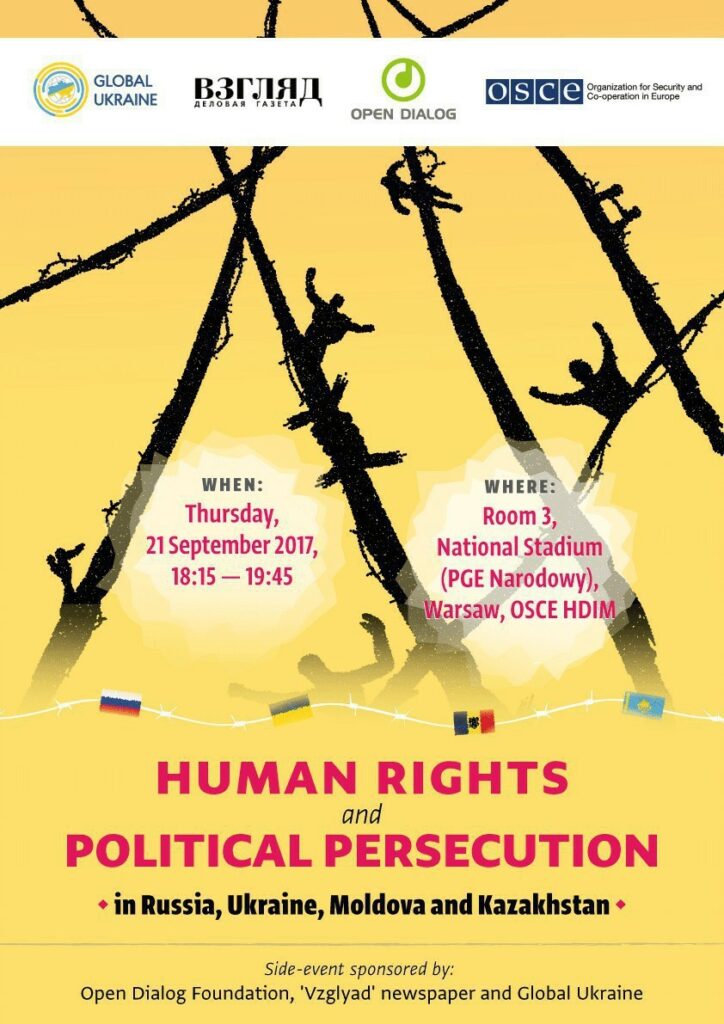 The Open Dialog Foundation is pleased to invite you to an expert seminar  “Human Rights and Political Persecution in Russia, Ukraine, Moldova and Kazakhstan“, which will be held in Warsaw on Thursday 21 2017, from 18:15_19:45 pm, at the premises of the National Stadium (PGE Narodowy), Room 3, on the occasion of the OSCE HDIM 2017. At the seminar, human rights defenders and civil society experts will gather to discuss concrete cases of human rights violations and political persecution in the Post-Soviet region; as well as mechanisms and tools of OSCE to stop such practices. Particular attention will be given to Russia, Ukraine, Moldova and Kazakhstan. The Russian Federation is one of three ‘leaders’ among all Council of Europe member states when it comes to number of unexecuted rulings of the European Court of Human Rights (ECHR); during the event speakers will introduce individual cases in which Russian authorities have ignored international obligations and failed to apply ECHR decisions. In Kazakhstan, we are witnessing a new wave of repressions aimed at silencing dissenting voices, independent media outlets, peaceful protesters and opposition activists. While in the last year, a sweeping crackdown on civil society has intensified in Ukraine and Moldova. Unprecedented criminal proceedings and episodes of harassment have targeted NGOs, journalists and pro-reform activists in the two countries.

The event will be co-hosted by ‘Vzglyad’ newspaper, Global Ukraine and the Open Dialog Foundation with the participation of prominent lawyers and civil society activists from across different states. During the conference, the Open Dialog Foundation will present and comment the aforementioned cases and its latest reports, which contain findings and recommendations covering international recognised individual, civil and political rights in Russia, Kazakhstan, Ukraine and Moldova.

Among the confirmed speakers:

More information on the Human Dimension Implementation Meeting of OSCE 2017, side events and agenda could be found here: http://www.osce.org/odihr/hdim_2017.