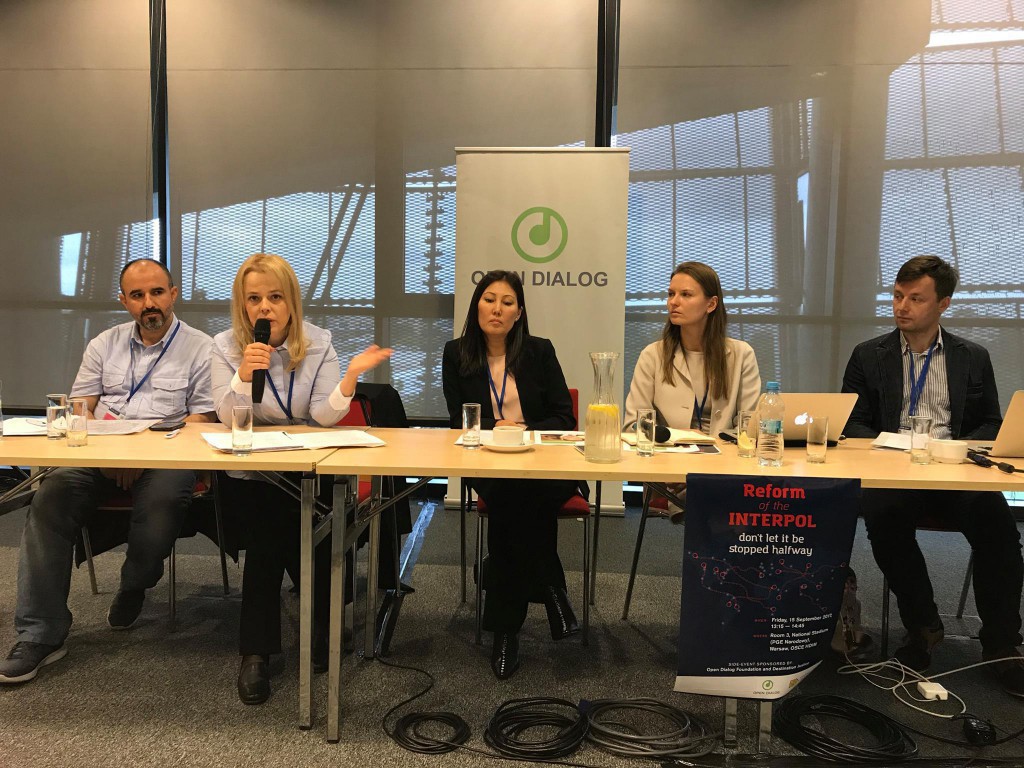 “Reform of the INTERPOL: don’t let it be stopped halfway” – a debate during OSCE/ODIHR HDIM 2017

The Open Dialog Foundation, in partnership with Destination Justice held a debate “Reform of the INTERPOL: don’t let it be stopped halfway” in Warsaw on 15 September 2017, at the premises of the National Stadium (PGE Narodowy) on the occasion of the OSCE HDIM2017.

Recent abuses of INTERPOL by non-democratic states, such as the Red Notice issued by Turkey to detain a German writer in Spain, Mr Doğan Akhanli and other relevant cases in Russia, Moldova, Kazakhstan and Azerbaijan, show why the reforms introduced by INTERPOL recently should be implemented decisively and without delay.

The adoption of the report “Abusive use of the INTERPOL system: the need for more stringent legal safeguards” by the Parliamentary Assembly of the Council of Europe (PACE) represents an important support for those civil society organisations, such as the Open Dialog Foundation, which followed the reform process closely and now call for further improvements.

Also, video messages from a number of victims of INTERPOL’s abuse who due to their legal situation or location cannot travel, were be presented during the event:
– Akhmed Zakayev, former Deputy Prime Minister and Prime Minister of the unrecognised Chechen Republic of Ichkeria, granted political asylum in the UK;
– Anatoliy Pogorelov, Kazakhstan, former BTA Bank employee, at risk of extradition from the United Arab Emirates;
– Yan Andreyev, the former head of the Tutaev district of the Yaroslavl region (Russia);
– Leila Khrapunova, whose family members are subject to extradition requests due to public support provided to the family of Mukhtar Ablyazov, a prominent dissident;
– Leyla Yunus, a prominent Azerbeijani human rights defender and political refugee;
– Silvia Palomba, Director of Destination Justice, human rights NGO.