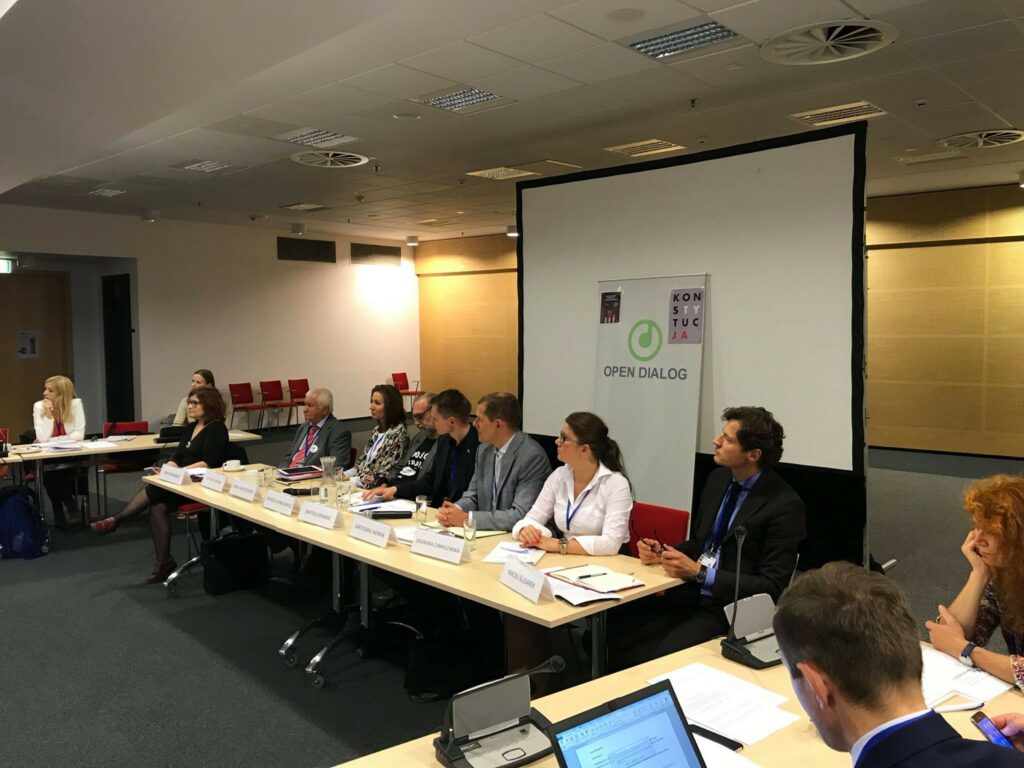 On 13.09.2017, at the National Stadium in Warsaw, during the international conference 2017 Human Dimension Implementation Meeting which was an OSCE Office for Democratic Institutions and Human Rights (ODIHR) (OSCE) event, we organised a discussion panel on the attack on the rule of law and civil society in Poland. It linked to recent protests in the defence of the Constitution and the tri-partite division of power (autonomy of courts of law and independence of judges) and an unprecedented pressure from the ruling party on non-government organisations which are critical of the ones currently in power and their activists.

Amongst the guests, there were representatives of diplomatic missions, activists of social movements and non-government organisations, journalists as well as Director Mirosław Wróblewski of the Ombudsman’s Office.

The discussion was moderated by Anna Dryjańska of naTemat.pl. editorial board. Problems with the rule of law in Poland after the double elections in 2015 were presented briefly by Stanisław Zakroczymski of the University of Warsaw/Magazyn Kontakt, and the panellists were:

We also thank the representatives of the Civil Democracy ODnowa, Campaign against Homophobia, FOR Foundation (Civil Development Forum), Feminist Initiative, Helsinki Human Rights Foundation, Feminoteka Foundation, Green Party, Civic Platform, the Free courts community, ODIHR (OSCE), and the editorial board of the Polish Press Agency, Polityka, Gazeta Wyborcza and Onet, East News agency and other guests on whom we could rely. More than 60 people were present at the event, and the panel was amongst the most frequented side events at this year’s HDIM.

Despite invitations, on the other hand, representatives of the government structures, including the Prime Minister’s Chancellery, Ministry of Internal Affairs and Administration and the Ministry of Foreign Affairs did not turn up. There was no chance for an open dialogue with “the other side” this time.

Next to presenting problems faced by particular organisations, we focused on discussing methods of dealing with the situation – both in Poland and on the international forum.

The preparations for the event were coordinated by our colleague Tomasz Szypuła. This is his personal success.

We are grateful for the photographs to Marta Bogdanowicz aka Spacerowiczka (Walker) and Katarzyna Pierzchała.