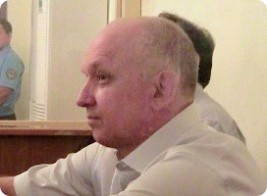 Trial of the Kazakh opposition: Kozlov intends to go on a hunger strike

Recent events in Aktau highlighted the importance of international monitoring over the trial of the oppositionists in Kazakhstan.

The trial of the Kazakh oppositionists began on 18.08.2012 in Mangistau regional court in the city of Aktau. In our previous report, we informed you about violations of the international standards of fair trial which took place before the beginning of the trial.

According to Alia Turusbekova, Vladimir Kozlov’s wife, the oppositionist intends to go on hunger strike if the judge does not consider his complaint about unauthorised persons entering his prison cell. According to Kozlov, he saw people inside his cell during his absence. However, when asked “Who are you?”, the strangers did not identify themselves – they very often behave rudely and they constantly check the politician’s cell and intercept his packages. Therefore, Kozlov fears for his life. Kozlov sent a letter of complaint from the detention facility, but the judge did not receive it. Observers of the “Open Dialog Foundation” assume that, most likely, the prison authorities intercepted the letter, and, therefore, denied the defendant the right to complain to the authorities. Despite the fact that Kozlov publicly declared his complaint many times at the court sessions orally, the judge refused to consider it, requiring a written application.

Interrogation of witnesses of the prosecution began in the Mangistau Court last week.

• Importantly,  Polish MEP, Piotr Borys, will have the opportunity to speak in the court as a witness. Previously, Borys invited Kozlov to a conference on the tragedy in Zhanaozen, which took place on 17-18.01.2012 in the European Parliament. Piotr Borys said that the oil workers were intent on solving the labour dispute by peaceful means, and that there was nothing unlawful about the support that the defendants: oppositionists have shown for the oil-workers. As a member of a European Parliament working group for Central Asia, Piotr Borys visited Kazakhstan at the beginning of 2012 in connection with the Zhanaozen investigation to keep track of the human rights situation. According to him, in 2011, representatives of the striking oil workers, as well as Vladimir Kozlov himself, visited the European Parliament. The oil-workers reported on their severe working conditions and the necessity to stop the dismissal of workers. Furthermore, Kozlov emphasised the importance of an impartial investigation into the Zhanaozen tragedy and the necessity of the international community paying due attention to this matter. Piotr Borys stated that for any party in each EU country, working with people in order to address any labour or social conflicts is a common practise.

• At the same time judge Berdybek Myrzabekov refused permission for Markus Loening, Commissioner for Human Rights of the Government of Germany, to meet with the accused: Vladimir Kozlov. Markus Loening asked for a 15-minute meeting with the defendant in the presence of court enforcement officers and attorneys. On 05.09.2012 Kozlov’s attorney, Venera Sarsenbina, filed this request with the judge, but the judge did not accede to it.

• The testimony of a famous theatre director and oppositionist, Bolat Atabayev, staying in Germany, was read out in the court in a distorted form. On 03.09.2012 B. Atabayev wrote to the Mangistau Court about the inconsistency of the testimony published on his behalf. According to him, it was incorrectly translated into Russian and significantly distorted. Statements against Kozlov were entered into the minutes of the court session. The director requested the investigator to remove the statements that he did not make from the minutes, but the request was ignored. Therefore, Bolat Atabayev decided to immediately terminate his stay in Germany and return to Kazakhstan to deny the testimony. However, after this statement the director was unable to fly out of Germany – his documents had been stolen. Bolat Atabayev is visiting Germany in connection with a ceremony  during which he was awarded the Goethe Medal. It was he who informed Markus Loening and the members of the Bundestag of the details of the oppositionists’ trial.

On 04.09.2012 the court commenced the cross-examination of members of the opposition party “Alga!” led by Vladimir Kozlov. Heads of the departments in the party, Fatima Kasenova and Marat Zhanuzakov, were asked questions about the political structure of the party and its oppositionist activities. The prosecution tried to prove that the criticisism of the government by the opposition led to incitement of social hatred.

According to witnesses Akhmen Erkin and Bakhyt Tumenova, dissatisfaction of the oil workers had serious grounding, and the activities of the opposition politicians did not pose any risk to society. The Head of a non-governmental organization “Aman-Saulyk”, Bakhyt Tumenova, said that according to the results of her study, 42 per cent of the striking oil workers were the sole breadwinners in their families, and 43 per cent did not own their homes. Activist Akhmen Erkin said that Serik Sapargali, as a person respected by the oil workers, wanted to help them solve their problems and never spoke of the need to arm.

MEP Marek Migalski called on the Kazakh authorities to stop the judicial investigation of Vladimir Kozlov, which, according to him, is politically motivated.

Observers of the trial, Irina Virtosu and Alena Luneva, as well as a prominent human rights activist Yevgeny Zhovtis, state: “The nature of the charges and evidence against the defendants shows that they are being sued for opposition activities, which are considered absolutely normal in European countries”.

Therefore, the participation of as many European observers as possible, is the only effective way to ensure the fairness and equality of the judicial process.