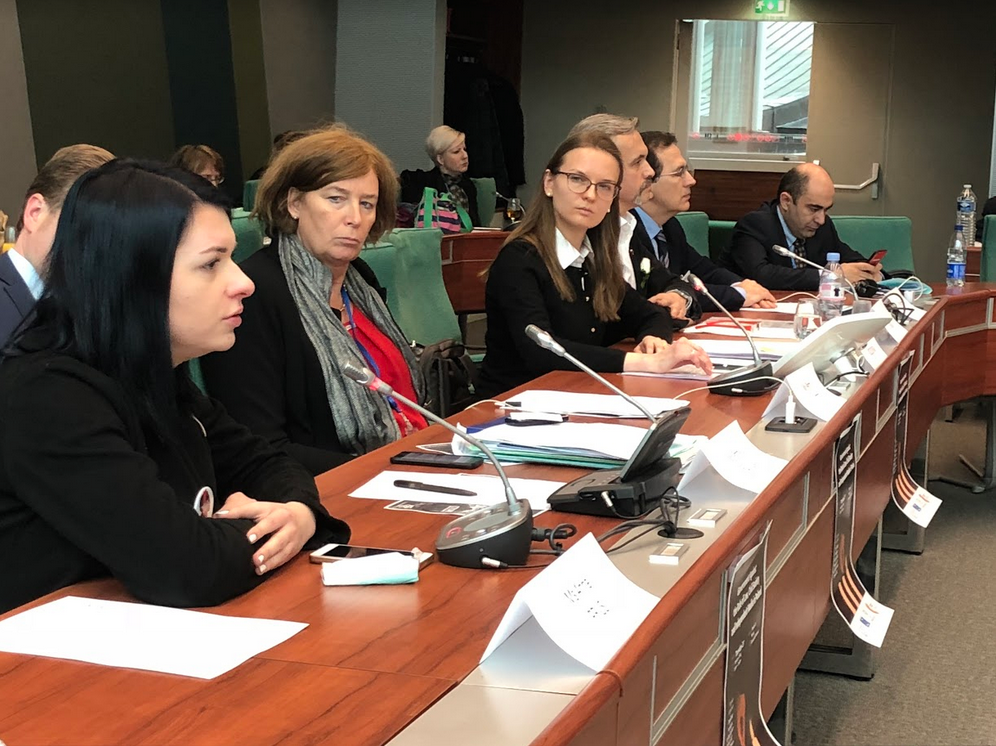 Strasbourg: Members of PACE concerned about the rule of law, media freedom and independence of NGOs in Poland

On the occasion of the winter session of the Parliamentary Assembly of the Council of Europe (PACE), the Open Dialog Foundation organised a 4-day mission to Strasbourg. The Polish delegation was headed by Lyudmyla Kozlovska, President of the Open Dialog Foundation, Anna Prus from Ogólnopolski Strajk Kobiet [The Poland-wide Women’s Strike] and Robert Hojda – creator of the Przystań “OKO” [The Open Civic Club Haven]. An important contribution to the mission was made by Antonio Stango, President of the Italian Federation for Human Rights.

In addition to a number of individual meetings with representatives of diplomatic missions, the Office of the Council of Europe Commissioner for Human Rights and national delegates (parliamentarians of individual member countries, from Ukraine to Great Britain and Spain), the Foundation organised an event devoted to the situation of the rule of law and impairment of civil society in Poland. The event was co-hosted by MPs Petra De Sutter (Belgium; SOC) and Frank Schwabe (Germany, SOC), entitled “Government Against the Rule of Law, Civil Society and Independent Media in Poland“.

Previous documents, including the October declaration on attacks on the rule of law and NGOs in Poland and the Assembly’s report drafted by MP Bernd Fabritius (Germany; EPP/CD), have underlined how Poland is threatening the country’s judiciary and civil society organisations. As early as in July, the assembly dealt with the issues of independence of the judiciary and the rights of women in Poland.

Besides the systemic nature of the disruption of the rule of law and the political control of the country’s judiciary, individual meetings and the event raised a number of concerns about breaches of freedom of the media and of association. Particular attention was devoted to the government’s policy towards NGOs which are not aligned with the authorities and are now at risk of being suppressed.

During her intervention, Lyudmyla Kozlovska expressed outrage at the attacks on NGOs and independent media happening in Poland: “Ministries and high profile politicians discuss how they will harm NGOs and how they’ll stop investigations conducted by independent journalists”. She also recalled how, just a few years ago, Poland was a positive model of transition and legitimacy, from the strong condemnation of Russia’s illegal annexation of Crimea to the support for Euromaidan protests. She compared the situation to today’s Poland where, instead, “new anti-constitutional laws on the Supreme Court and the National Council of the Judiciary entered into force in January 2018.”

Lyudmyla Kozlovska stated her concern about current attacks on CSOs in Poland. “Organisations critical of the state authorities (e.g. the Committee for the Protection of Democracy, Citizens of the Republic of Poland, Citizens Solidary in Action, the Open Dialog Foundation itself, Polish Women on Strike, other women’s rights NGOs) and activists have been under pressure (including the use of unlawful detentions, harassment by the Internal Security Agency, surveillance and fiscal control) over the last months.”

She spoke out against “the defamatory campaigns which have targeted the government’s critics and which have been conducted by the state media”. She added that “such situations have led to hate speech and physical attacks in public spaces and have been conducted with the tacit consent of – and reluctant responses from – the law enforcement bodies”.

At the end of her speech, the President of the Foundation called upon PACE to thoroughly investigate and discuss civil liberties in Poland, as well as the protection of individual activists and organisations who have been victims of this democratic failure.

Robert Hojda and Anna Prus – who have been actively involved in organising anti-government protests, marches against the insurgence of far-right movements, and civil and peaceful initiatives for the promotion and protection of the rule of law and women’s rights – brought their own testimony. Particularly, they focused on attacks on the independence of NGOs and the media (e.g. the imposition of a financial penalty on TVN, the attacks by Minister Patryk Jaki and the pressure from Żandarmeria Wojskowa [The Military Police] exerted on journalists of the Onet portal/the editorial office of Onet Wiadomości) and, primarily, on individual incidents: battery upon the actor Krzysztof Pieczyński, and unlawful police interventions and proceedings against activists and participants in civil protests.

In addressing the situation in Poland presented by Polish guests, Antonio Stango added: “in the 80s, I followed all the great events full of hopes for democracy, human rights and freedom in Poland as well as in many other countries. Unfortunately, freedom is not forever and it is always possible to step back from it and this is what, in my opinion, we are witnessing in several countries, and specifically in Poland”. He continued: “in the last few years, two of the main basic freedoms have been being openly violated: freedom of association and freedom of expression. Demonstrations against the government are being more [and more] attacked either directly by state police or by neo-fascist or hyper nationalistic movements that are apparently tolerated by police and state bodies. Conversely, what is not tolerated is people struggling for freedom.”

About the jeopardising of media freedom and pluralism, Antonio Stango recalled: “according to Freedom House, Poland is no more classified as a free country but rather as partly free; this is due to continuous interferences by state government bodies in the media, in the direction of state TV stations … It’s becoming more and more difficult to spread the voice of the opposition through newspapers and TV outlets. Constitutional rights in Poland are under attack and even the Constitutional courts have been, in some cases, deprived of their normal functioning. Executive powers are attacking other powers.”

To the question “What could the Council of Europe do?” raised by the audience, Petra De Sutter answered: “We have the instruments: we can put it on the agenda, have a debate, write reports, ask for recommendations to the Committee of Ministers. We should keep on pushing the agenda, informing people in their own parliaments and the public at large. People have to know what is happening in Poland, in the EU.” She added: “we do not have many hard powers, but we have soft powers and we should not underestimate such tools; we have to use them. We need to be vocal and give voice to these people.”

While replying to a member of Polish government present at the event, De Sutter said: “Not only are these people critical [of state authorities], but so also is the European Commission and this is based on facts and data. I cannot accept they might be mistaken, there is something that needs to be addressed and changed in Poland. For sure, what we agree on is that it has to be through dialogue, a dialogue with all sides, but definitely also with civil society.”

In the closing remarks, Frank Schwabe, Chairman of the Committee on Legal Affairs and Human Rights of PACE, issued a call for action: “there are, indeed, concrete situations and there are good reasons to prepare a special report about the developments hereby described”.

The main, direct result of ODF’s activities is the motion for a resolution, entitled “Civil liberties in Poland, Ukraine and the Republic of Moldova must be preserved“, signed by 30 delegates (main author MP Alexander Dundee – UK; EC); whose main part concerns Poland.

The motion will be discussed (and either approved or rejected) at the next session of the Assembly in Paris by the Standing Committee consisting of the President, the Vice-Presidents and the heads of political groups, national delegations and committees (60 parliamentarians from 47 countries). In the event of its approval, the next steps will be its referral to the competent committees and appointment of a rapporteur and expert groups submitting recommendations.

After the report is presented by the rapporteur, a vote will take place. The adoption of a resolution may involve specific steps: implementation of a monitoring procedure, observation missions, and carrying out formal meetings with both governmental structures and civil society. In this regard, the Foundation will ensure that the proceedings and trials against activists – representatives of the so-called street opposition – will be observed and duly investigated.

More on this topic:
PACE , Poland , Open Dialogue , rule of law in Poland