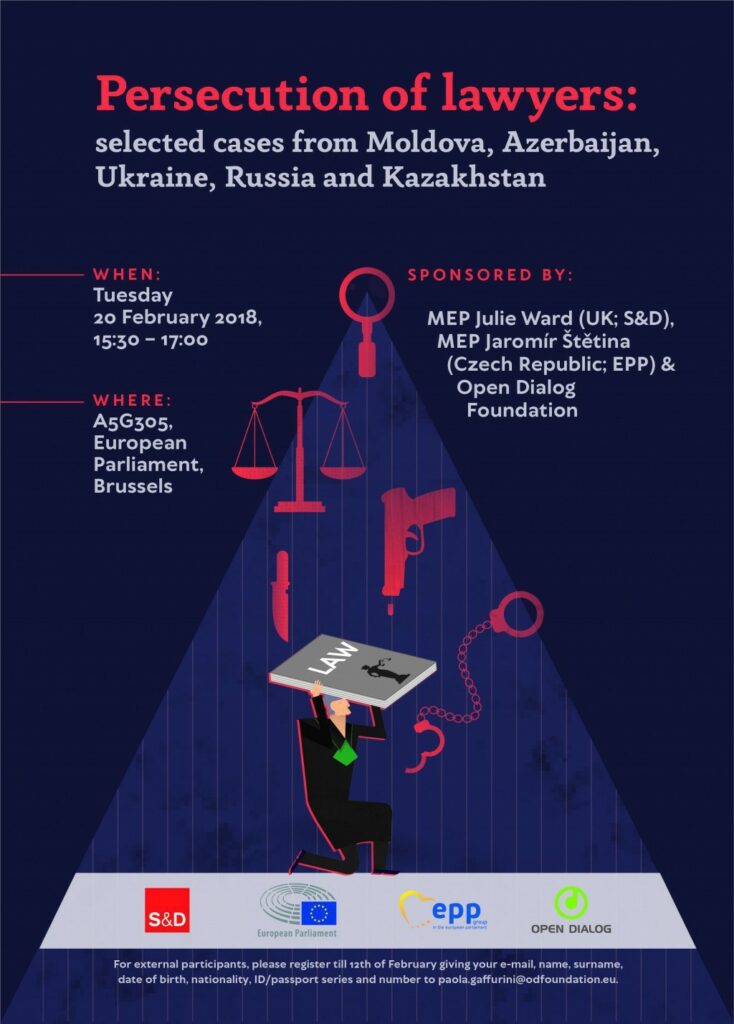 Event at the EP: “Persecution of lawyers: Selected cases from Moldova, Azerbaijan, Ukraine, Russia and Kazakhstan”

The Open Dialog Foundation is glad to invite you to an event on the topic of the persecution and protection of lawyers, which will be held on Tuesday 20 February 2018, from 15:30 to 17:00, room: A5G305; at the premises of the European Parliament – Brussels. The event is co-hosted by MEPs Ms Julie Ward (UK; S&D) and Mr Jaromír Štětina (Czech Republic; EPP), in partnership with the Open Dialog Foundation. In many Eastern European countries, the work of a lawyer is fraught with many risks: murders and attempted assassinations, criminal prosecution, beatings, threats, pressure on relatives, illegal searches, surveillance, attempts to withhold licenses of attorneys, and slanderous media campaigns. Legislation deficiencies in professional activities of counsels, ineffective law enforcement agencies, and the difficult general situation with respect for human rights all subject lawyers to danger.

The tightening trend of authoritarian regimes in some of the eastern countries is accompanied by an increase in the number of cases of political repression. Lawyers involved in politically motivated cases become, in turn, victims of persecution and pressure.

Many are the examples that we wish to discuss in order to show the importance that such an initiative entails. Several are the cases of lawyers being prosecuted in Russia, Moldova, Azerbaijan and Ukraine, as well as cases of prosecution in the territory of European countries (Belgium, Czech Republic) by extra-European authoritarian regimes (Kazakhstan).

During its last session, in January 2018, the Parliamentary Assembly of the Council of Europe voted in favour of the drafting of a European Convention on the Profession of Lawyer, in order to offer greater protection to lawyers who are constantly endangered by their engagement in the defence of their clients.

Similarly, the European Union needs to set an example for and promote the respect and protection of the often difficult and hurdled profession of lawyer.

The event aims at gathering together Members of the European Parliament, representatives from civil society organisations and international bar associations, exiled lawyers and human rights defenders.

We hereby take this opportunity to debate about what actions can be undertaken with:

Additional speakers will be soon confirmed.