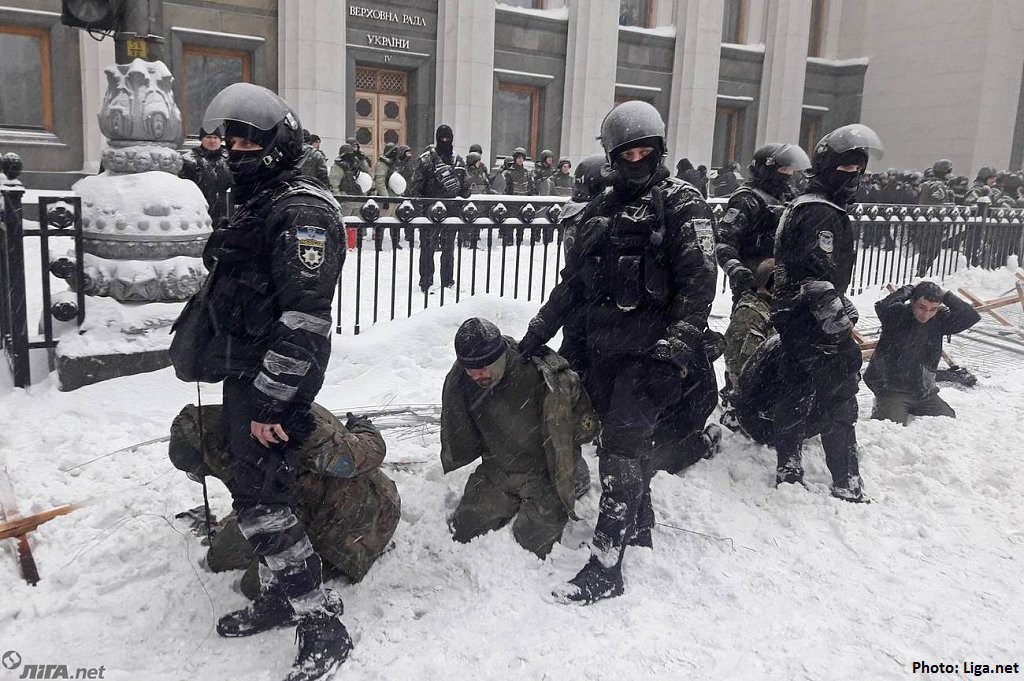 7 March 2018 | Authors: Authors: Igor Savchenko, Andriy Osavoliyk
Table of contents:
The tent camp near the Ukrainian parliament buildingDispersion of the protest actionThe detained and injuredGross violations by the police

On 3 March 2018, the police used brutal force to disperse a many-months-long protest near the Ukrainian parliament building. As a result of clashes between police and protesters, more than 100 people were detained. For the first time in four years, the Ukrainian authorities have resorted to massive arbitrary detentions of protesters.

The police committed a number of violations: blows to the head, degrading treatment, use of force against journalists, and a lack of identification numbers on many police officers’ protective equipment. The police liquidated the tent camp of protesters, although it only was authorised to carry out a search. The senior leadership of the law enforcement agencies allow themselves to mock and make dismissive comments with regard to the protesters, thereby ‘justifying’ the violation of the standards of human rights by the police.

The tent camp near the Ukrainian parliament building

On 17 October 2017, a mass protest was held in Kyiv; it was organised by several civil society organisations and political parties. They put forward three main demands: a change to electoral legislation, cancellation of parliamentary immunity and creation of an anti-corruption court. Protesters installed a tent camp near the parliament building and announced their intention to continue the protest until their demands are met. During the existence of the tent camp, the police made several attempts to disperse it.

Some of the leaders of the protest were MPs from the party ‘Self Reliance’ (Samopomich), Yegor Sobolev and Semen Semenchenko. Also, Mikheil Saakashvili’s party ‘Movement of New Forces’ (Ukrainian: ‘Рух нових сил’) actively participated in the protest. However, in February 2018, they announced their departure from the tent camp. Among those who remained, there was a significant number of veterans of the former volunteer battalion ‘Donbass’ who fought against pro-Russian militants in the East of Ukraine.

On 27 February 2018,clashes broke out between the protesters and the police, resulting in injuries on both sides of the conflict. In connection with this fact, law enforcement agencies initiated a criminal case. Another criminal case was initiated in connection with the developments of 17 December 2017, when Saakashvili’s supporters stormed the October Palace (initially, Saakashvili called for an establishment of a ‘headquarters’ there, but later labelled the event a ‘provocation’). On the basis of these criminal cases, on 2 March 2018, the Pecherskiy District Court of Kiev decided to conduct an inspection and search of the tent camp.

Dispersion of the protest action

On 3 March 2018, on Saturday, at approx. 7 a.m., large forces of the National Police and the National Guard surrounded the tent camp. The police stated that they had come to carry out the court’s decision and ‘conduct investigative actions’, but the protesters began to ‘hinder the actions’.

The protesters set fire to tyres. The police officers went on to storm the tent camp. According to journalists’ reports, as well as video and photo recordings of the events, the protesters fought back with sticks, and threw stones, chunks of ice, bottles and objects similar to blast packets or firecrackers at the police officers.

The police, in turn, used tear gas and beat protesters with truncheons. Many protesters (including one woman) suffered head injuries. They reported that the police also struck people in the ribs.

The police began to dismantle the barricades. In order to extinguish the fire, they used not only fire extinguishers, but also hoses. According to eyewitnesses, some protesters were hit by the water stream, while the air temperature was below -7°C.

The detained and injured

According to official data, 111 people were taken to police stations. Protesters report 112 detainees. Almost all of them were detained as ‘witnesses’. With respect to four persons, protocols on administrative violation have been drawn up. One person was informed of being under suspicion of committing a criminal offence with regard to the clashes with the police that occurred on 27 February 2018. By the evening of 3 March 2018, all the detainees had been released.

13 protesters were admitted to the hospital. In most cases, they sustained craniocerebral injuries, gash wounds, traumas of extremities and burns. According to MP Yegor Sobolev, two protesters have more serious injuries and remain in hospital.

The Red Cross reported that its employees provided medical assistance to two police officers. The Ministry of Internal Affairs first reported four hospitalised policemen, but later announced that there were seven injured persons.

Gross violations by the police

The nature of the injuries sustained by the protesters, as well as the video recording of the developments of 3 March 2018, indicate several grave violations by the police:

Another worrying fact is how the senior management of law enforcement agencies reacted to these events. Minister of Internal Affairs Arsen Avakov actually boasts of using violence and jokes about this. ‘We turned down something, too (…) although some say that it’s not exactly what was meant’, the minister wrote, adding a ‘smiley’ (previously, Naftogaz had called on citizens to ‘turn down’, that is, to reduce the temperature in their homes, as Russia had reduced the pressure in their gas pipelines). Such statements can be regarded as a demonstration of a sense of permissiveness.

‘Just wailing’ was the word used by the speaker of the Ministry of Internal Affairs Artem Shevchenko to describe the indignation of the public about keeping protesters on their knees. He believes that ‘the degree of police savagery wasn’t excessive’. General Prosecutor Yuriy Lutsenko stated that his department ‘supports the lawful actions of the Ministry of Internal Affairs’. He added that the protest was ‘paid’ by Russia, and the protesters ‘were developing plans to seize the parliament’.

In fact, the heads of law enforcement agencies are engaged in propaganda and create a negative image of protesters in society, thereby ‘justifying’ the use of brute force against them. The prosecutor’s office initiated a criminal case to investigate the possible abuse of authority by police officers, as well as deliberate obstruction of journalists’ activity. Still, disparaging statements by senior officials raise doubts whether a proper and objective investigation has been carried out.

The police in Kyiv stated that, as a result of the search in the tent camp, several grenades similar to combat ones were found. The police also discovered smoke bombs, incendiary bottles, truncheons, and sticks.

On 5 March 2018, the Office of the Ombudsman stressed that on 3 March 2018, the police grossly violated human rights, in particular, the right to freedom of assembly, to freedom of speech, to personal freedom and not to be subjected to inhuman treatment. The statement was supported by 23 civil society and human rights organisations (including the Open Dialog Foundation).

Law enforcement officers are obliged to act solely within the framework of existing legislation and not succumb to provocations. The methods used during the dispersal of the protest rally are unacceptable in a state governed by the rule of law. They are a proof of the ineffectiveness of the reforms implemented in the Ukrainian police. The methods of engaging protesters have not undergone major changes since the time of EuroMaidan.

The international community must react to the recent developments and demand an immediate response from the Ukrainian authorities to the illegal actions of the police.

In order to prevent such cases, in the future, we consider it necessary: