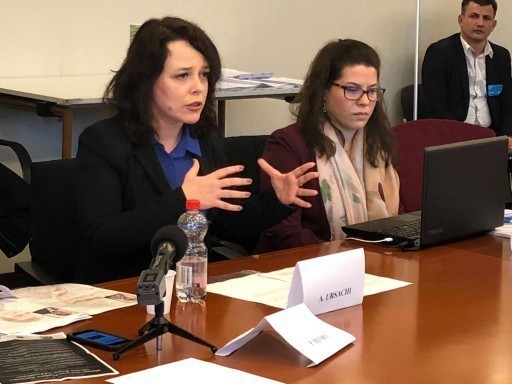 Moldova: In violation of the right to defence, court issued an order to arrest counsel Ana Ursachi

A Moldovan court has sanctioned the arrest of counsel Ana Ursachi. The court session was carried out in the absence of her defenders. The authorities engaged a public defender in the judicial process, which can be regarded as a way to legalise the court decision. There is reason to believe that the decision to arrest was issued by non-judicial procedure. According to Ursachi, her name is now included on the INTERPOL wanted list and she may be detained at any time.

On 29 March 2018, Judge of the Central Court of Chisinau, Nicolae Corcea, granted the motion of the prosecutor’s office regarding the arrest of Ana Ursachi. The arrest is sanctioned for a period of 30 days. The hearing was held in the absence of Ursachi’s counsels, Iulian Rusanovschi and Eduard Rudenco. Instead, public defender Mihail Lebedinschi was involved in the case.

It is noteworthy that the counsels indicated in the court’s ruling with the justification of the arrest are different from those in the arrest warrant.Thus, the court’s decision states that Lebedinschi participated in the judicial process, while the warrant states that Rusanovschi and Rudenco were acting as her defenders. At the same time, the operative part of the warrant specifies that it was issued on 27 March 2018, although the court session was held on 29 March 2018. This may indicate that the arrest warrant could have been drawn up in advance, and so the names of the counsels, Rusanovschi and Rudenco, had been indicated in it, but they did not ultimately take part in the court session.

Counsel Ana Ursachi is famous for her involvement in numerous high-profile cases, in particular, for defending the interests of opponents of the Moldovan oligarch and influential politician Vladimir Plahotniuc. In September–October 2016, the media owned by Plahotniuc (for example, Canal3 and Prime) launched a campaign to discredit Ursachi. In their stories, they said that Ursachi had been ‘involved’ in a murder committed 20 years before. In October 2016, the General Prosecutor’s Office resumed the criminal case against Ana Ursachi in order to ‘establish the extent to which Ursachi was involved in the crime’. In Ursachi’s case, the 15-year statute of limitations expired in 2012. In addition, as noted by Ursachi, 20 years ago law enforcement agencies already carried out an investigation against her, but the case was closed. Therefore, the counsel pointed to a violation of the principle of non bis in idem(no one can be tried or punished twice for the same act). Ursachi requested that the court declare illegal the decision to resume the criminal investigation into the murder, but the court dismissed the complaint. At the moment, Ana Ursachi is living outside of Moldova.

According to Ana Ursachi, INTERPOL has issued a ‘red notice’ against her. This means that she can be detained at any time at the request of Moldova.

Representatives of the international community have repeatedly stated that the criminal prosecution of counsel Ana Ursachi is related to her professional activities. In particular, the human rights organisations Amnesty International, Destination Justice, German Ambassador to Moldova, Head of the Committee on Democracy and Human Rights of the OSCE PA, Ignacio Sanchez Amor, Head of the EU Delegation to Moldova Pirkka Tapiola, approximately 15 MPs of the European Parliament, more than ten MPs of the Polish Sejm, and five Italian parliamentarians issued statements in defence of Ursachi. The case of Ursachi is mentioned in a written declaration of 25 January 2017 on political pressure exerted on representatives of the civil society in Moldova, which was signed by 23 PACE members, as well as in the written declaration of 12 October 2017 on violation of Moldova’s international obligations, which was signed by 31 PACE members.

The Open Dialog Foundation hereby calls on the Moldovan authorities to stop ignoring the position of the international community, which recognised the case of Ursachi as being politically motivated and related to her professional activities. The warrant for the arrest of Ursachi was issued in violation of her right to defence; in particular, her counsels did not participate in the court session. Also, there are reasons to believe that the decision to sanction her arrest had been prepared several days before the court session took place.

The Open Dialog Foundation believes that the decision to arrest Ana Ursachi must be revoked, and the criminal case against her should be discontinued. We also expect that INTERPOL will prevent the issuance of the wanted notice for Ana Ursachi, as her prosecution is political in nature.