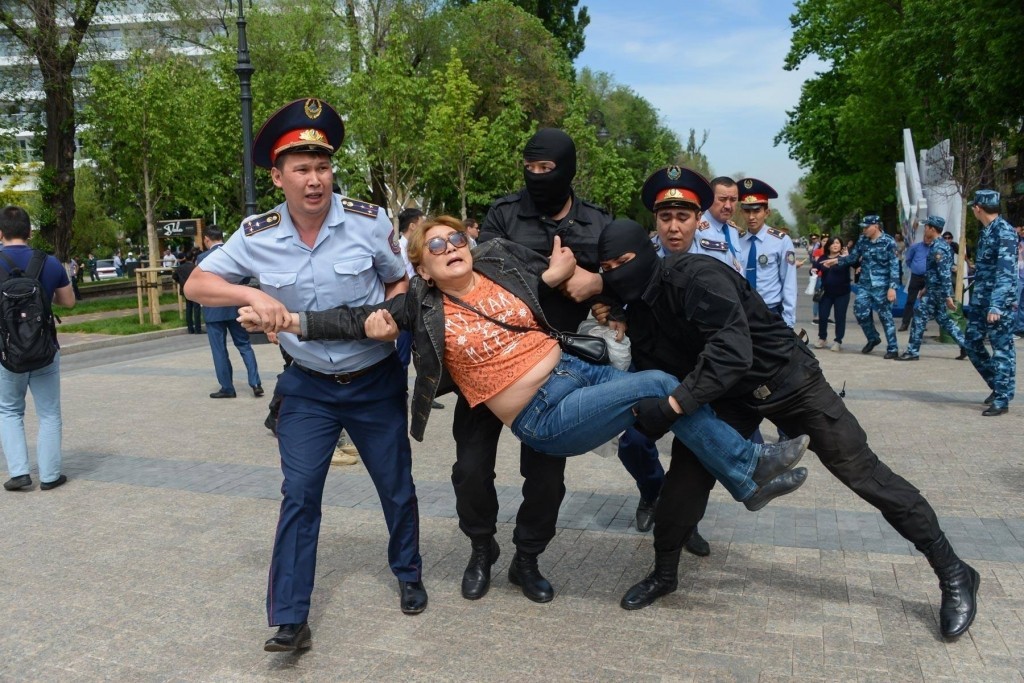 Kazakhstan: Violent mass detentions of protesters during the visit of the European Parliament delegation

15 May 2018 | Author: Igor Savchenko
Table of contents:
The use of excessive force against protestersAdministrative arrests and penaltiesOppression of DCK supporters

On 10 May 2018, in different regions of Kazakhstan, the police dispersed peaceful protesters with the use of brute force. Participants in the protests were striving to draw the attention of the delegation of the European Parliament to the problem of political prisoners and the practice of torture in the country’s detention centres. More than 150 people were detained and more than 20 subjected to administrative arrests. The number of criminal cases initiated against supporters of the Democratic Choice of Kazakhstan is growing – Murat Tungishbayev, a blogger, has become another defendant to be put in a detention facility.

On 10 May 2018, peaceful protests took place in different cities of Kazakhstan (Almaty, Astana, Semey, Aktobe, Uralsk, Shymkent, Pavlodar). Protesters demanded the release of political prisoners, as well as the cessation of torture and ill-treatment in places of detention.

The rallies in Almaty and Astana were the largest, gathering a total of approximately 200 people. In the remaining cities, there were from ten to several dozen protesters. According to human rights activists, approximately 300 people in Kazakhstan ventured out to rallies that day. Given the repressive policy of the authoritarian authorities, such protest actions are a rare phenomenon in Kazakhstan.

The use of excessive force against protesters

The time of the protest coincided with the time of the visit of the delegation of members of the European Parliament, which was verifying the fulfillment by Kazakhstan of its obligations under the Enhanced Partnership and Cooperation Agreement with the EU, including in the field of human rights. Mukhtar Ablyazov, a Kazakhstani opposition politician and one of the founders of the opposition movement ‘Democratic Choice of Kazakhstan’ (DCK), called for the protest.

The rallies were violently dispersed by officers of special police units, whose uniforms had no identification insignia. In addition, in Almaty, policemen were wearing masks.

The police repeatedly stormed the ranks of the protesters, dragged individuals out of the crowd (also dragging them by their feet), twisted their arms and violently pushed them into police buses. Also, policemen dragged people, holding their arms and feet, partially dragging them across pavement.

Not only were women and elderly people subjected to detentions, but also minors. In Astana, policemen pushed a child into the bus, although people were shouting that he was only 12 years old. The police also grabbed random passers-by who were expressing their dissatisfaction with what was happening.

According to journalists, the greatest number of detainees was in Almaty (more than 70 people) and in Astana (more than 50 people); more than 10 people were detained in Aktobe, and several people in other cities.

The protesters were taken to police stations, where the policemen copied the data from their passports and in several cases took detainees’ fingerprints. Those detained did not have counsels. Some of the detainees were forced to write ‘explanatory notes’. In the police stations, they were threatened with criminal responsibility for supporting the DCK and Ablyazov. Activists reported that in Astana, the policemen took away telephones from at least 15 people. The activists are making attempts to get their phones back. After conducting ‘explanatory discussions’, the policemen released most of the detainees without issuing a single document (in many cases, detention protocols were not drawn up at all).

Some of the detainees were subjected to administrative penalties: 3–5 days of incarceration or a fine of 95–125 euros. They were accused of ‘violating the law on the procedure for holding peaceful assemblies’ (Article 488 of the Administrative Code). According to activists, accelerated court trials were held late at night in the absence of counsels. Thus far, not all court trials have been held in order to consider the administrative cases, and so the number of those arrested may increase.

At the moment, journalists and human rights activists are citing the following number of administratively arrested people in different cities: Almaty – 8; Astana – more than 10; Semey – approx. 8; Aktobe – 2; Pavlodar – 1. In addition, fines were imposed on several activists in various regions.

Aydin Yegeubayev from Astana was sentenced to administrative arrest for 5 days. During the detention, they broke his finger. In addition, there is a verdict against him on the restriction of freedom, as he was convicted of ‘libel’. Therefore, administrative punishment may become the basis for replacing the restriction of freedom with imprisonment.

Among those who were subjected to administrative punishment in Almaty, was human rights activist Yerlan Kaliyev (5 days of incarceration). In addition, Gaini Yerimbetova and Myrzahan Yerimbetov, the parents of the political prisoner Iskander Yerimbetov, were given a warning and had a fine imposed on them by the court.

Human Rights Watch condemned the detention and the use of force against peaceful activists who were exercising their right to freedom of assembly and opinion.

Detentions and arrests of peaceful protesters have become another stage in the struggle of the Kazakhstani authorities with the opposition movement ‘Democratic Choice of Kazakhstan’ (the DCK). In March 2018, the Kazakhstani court banned the DCK, having convicted the organisation of ‘inciting social discord’, ‘creating a negative image of the authorities’ and ‘provoking protest sentiment’. The court decision provides for long prison terms (from 2 to 17 years) for any support for the DCK: publishing posts or comments, or clicking the ‘like’ button in social networks; agitation; participation in rallies; provision of information services; etc.

The events were publicised in the period 21–22 March 2018, when the police stopped people (including families with children) who were walking along the streets with blue balloons in their hands (blue is the colour of the symbols of the DCK), and threatened them with criminal liability. On 10 May 2018, during the detention, the policemen were popping the blue balloons. With regard to the detained activist Maygul Sadykova, a confiscation protocol was drawn up, according to which she ‘voluntarily gave three blue balloons to the police’.

On 10 May 2018, people wearing blue clothes also fell into the hands of the police, although they were shouting that they were simply passing by. In police stations, some detainees were given ‘explanations’ about the criminal responsibility for supporting the DCK.

The Kazakhstani authorities have already sent several people to the detention facilities, labelling them ‘members of the extremist organisation DCK’. In particular, currently, Kenzhebek Abishev, Almat Zhumagulov and Aset Nurzhaubay are being held in a pre-trial detention centre.

The Kazakhstani activist and blogger Murat Tungishbayev was accused of ‘financing the activities of a criminal group’ (Article 266 of the CC) and ‘participating in the activities of the organisation following its recognition as extremist’ (Article 405 of the CC). The authorities accuse Tungishbayev of ‘rendering information services to the DCK’ ‘via Facebook and Telegram’, as well as ‘provoking the discussion of urgent and sensitive topics in support of the DCK’. On 10 May 2018, Tungishbayev was arrested in Bishkek (Kyrgyzstan), after which he was placed in a detention facility until 10 July 2018. Kazakhstan intends to seek his extradition.

Following the decision to ban the DCK, the authorities can regard any human rights or civil activity as ‘provision of support for the DCK’. On 11 May 2018, Minister for Religious and Civil Society Affairs Darkhan Kaletayev suggested that ‘all NGOs in Kazakhstan should be re-registered’ in order to carry out an analysis as to ‘who these people are, [and] what […] the portrait of a civil society activist [is]’. This initiative may be caused by the desire to get rid of those civil society organisations that are monitoring incidents of political persecution and criticising the Kazakhstani authorities.

Before the arrival of the delegation of the European Parliament, the Kazakhstani authorities released several political prisoners, in particular, Talgat Ayan, Amin Yeleusinov, Nurbek Kushakbayev and Ardak Ashim (with regard to the latter, the decision on the forced placement of Ardak Ashim in a psychiatric hospital was revoked). However, these are only half-measures that create the appearance of fulfilling obligations before international partners. This is evidenced by subsequent arrests, the brutal suppression of peaceful assemblies and the persecution of supporters of the opposition movement, DCK. More than 20 political prisoners are still being held in places of detention in Kazakhstan.

We hereby call upon the EU, the UN, the PACE, the OSCE PA, the United States and other democratic governments to extend the application of the Global Magnitsky Human Rights Accountability Act to Kazakhstani officials responsible for repeated violations of obligations under the International Covenant on Civil and Political Rights, and also, responsible for the use of torture. The immediate release of political prisoners and ensuring of the right to freedom of assembly and opinions should become necessary conditions for further development of economic cooperation between Kazakhstan and the EU.